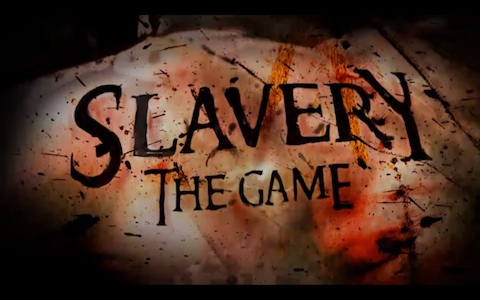 Last month, a trailer for a new video game, Slavery the Game, was released on YouTube and instantly went viral. It also elicited worldwide outrage and indignation, as well as racially abusive rhetoric in the YouTube comments section from those who must have eagerly awaited a game that invites players to take on the roles of “slave traders” at a time when “Europe ruled the world” and “discipline and exploit” the slaves they have bought with a weapon of choice—”whip, scourge, spiked club, rifle.”

As it turned out, this “trailer” was a hoax—a viral campaign to raise awareness about a new Dutch television series exploring the history of Dutch involvement in the transatlantic slave trade. The fictional producers of the fictional game, Javelin Reds, is merely an anagram for “De Slavernij” (Dutch for “slavery”).

While many might breathe a sigh of relief that there really won’t be such a game after all, I’m still reeling from its violent rhetoric and imagery, wondering just how effective the tricksters were in raising our historical consciousness as well as our present-day awareness of prevalent violence and disregard for bodies in actual video games. Think of games such as Grand Theft Auto, which rewards gamers for beating up sex workers and criminalizes black and brown male bodies, or the Call of Duty games, which simulate war violence and invite gamers to shoot and kill various racial and ethnic Others.

Because we have become so accustomed to seeing black bodies and women’s bodies as objects or fetishistic media spectacles, a viral campaign such as Slavery the Game is guaranteed widespread attention. But, in raising awareness through the spectacle of white oppressors subjugating black slaves, the only guarantee is that those descended from slaves will experience historical trauma while those who benefit from the privileges passed down from the international slave trade will either experience guilt or revel in their unearned power.

Personally, I think it would be a useful tool to have a video game that can effectively teach histories of slavery. But why place gamers in the position of oppressors? Wouldn’t it be more subversive and empowering to have gamers identify in the role of the enslaved, as National Geographic’s Underground Railroad game allows us to do? That simple hypertext game teaches choice and agency, as it maps out for the present-day gamer the difficult journey toward freedom. Some of my students structured their own game around this simple tool by updating the Underground Railroad and its present-day use in the underground domestic violence shelter movement.

In other words, gaming for political awareness has many uses, but in mobilizing games for pedagogy are we reinforcing oppression or modeling liberation?

That’s a question I routinely ask when I encounter games that claim to use virtual tools for social commentary and political awareness.  Take September 12, an online game that criticizes the U.S. response to the 9/11 attacks by waging war in Afghanistan and Iraq. Gamers are positioned as military soldiers in fighter jets, looking down at various “civilians” and assorted “terrorists” through cross-hairs. The game lets us know that there are no points and no rewards, and that we can shoot or not. If the gamer chooses to shoot, various civilians are killed, and survivors—peaceful citizens before the attacks—are now transformed into “terrorists.” If the gamer holds her/his fire, “terrorists” suddenly transform back into peaceful civilians. The lesson is ultimately one of peace and anti-war consciousness, but then the “game” becomes tedious, thus demonstrating that “war” and “conflict” makes a game worth playing. Is that really the kind of message we should be sending? What if there were a better game, in which we solved social inequality and eradicated poverty, two elements that have allowed for the spread of terrorism? Are game producers incapable of envisioning such games that cause gamers to advance toward freedom?

In a similar vein, the notorious Border Patrol game, in satirical fashion, shows how border-patrol agents shoot at Mexican “illegals” (including drug traffickers and pregnant “breeders”). Gamers are rewarded with points for each illegal immigrant they gun down, so this game encourages xenophobic racists. At least Breakthrough, a human rights popular-media organization based in New Delhi and New York, offered more insight and education through their ICED game (I Can End Deportation), which allows gamers to role-play as immigrants who must navigate their world without coming to the attention of immigration agents.  When I played the game, I did my best to stay below the radar and engage in positive civic activities, but a mere oversight (moving to a different state without reporting my move to authorities) landed me in a deportation center.  In this simulated environment, I felt truly entrapped, with  few opportunities for escape.  Alas, I ended up deported. And while this may be the reality for many immigrants to the U.S., I was beyond frustrated that the game didn’t provide tools for liberation.

Audre Lorde famously said, “The master’s tools will never dismantle the master’s house.” If we view how gaming works and is structured, this statement couldn’t be more true. In too many games simulating real-world violence or even raising awareness about social injustices, we are either rewarded for our ability to dominate others or become stuck in a quagmire. Any game that wants to raise social awareness needs to provide some tools of liberation as well, because awareness is not enough. Where would the Civil Rights movement be if schools such as the Highlander Center in Tennessee didn’t train some of our well-known activists from the era, like Rosa Parks, in nonviolent resistance? That’s not always a natural skill; it needs to be taught. Where is our nonviolent resistance video game, which rewards gamers for not resorting to violence during social conflicts and for steadfastly journeying on the path to freedom?

At the end of the day, if a game can’t lead a gamer to consider alternate ways to liberation, then it has simply become another master’s tool. Sometimes, we need to imagine and fantasize our freedoms before we can make them a reality.