Race, Class and Rights in Mississippi: Save the Pill and Save the Vote - Ms. Magazine
Skip to content 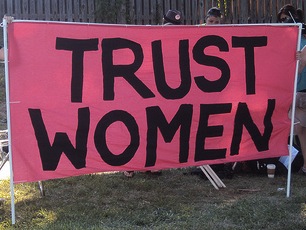 Two upcoming Mississippi ballot initiatives–Number 26, on so-called “personhood,” and Number 27, on Voter ID exclusions–may be one of the most important on-the-ground opportunities for the pro-choice and reproductive justice movements to work together. By co-joining race (Voter ID-27) with gender (so-called “Personhood”-26), we have an excellent opportunity to experience intersectionality in practice. Black women may be the very voters we need to move against our opponents’ long-term manipulation of the African American electorate.

SisterSong and the Trust Black Women Partnership have folks on the ground in Mississippi doing grassroots advocacy. We’ve built bridges between black and white folks working on the same team for united work against 26 and 27. I believe we have a strong chance of winning in Mississippi because I trust that African American people, especially black women, will do the right thing and vote against these initiatives if they are given the opportunity to vote, the motivation to vote and the right information with which to vote. In Mississippi, with its troublesome history of denying black people the right to vote, disenfranchisement through Voter ID is a very important issue that will bring African Americans (who make up more than one-third of Mississippians) to the polls. Our task is to convince them to also vote against the so-called “personhood” initiative.

We’re at a great time because the media outlets want to talk about this. We don’t lack an audience. What we lack is a unified message that is intersectional, credible, legitimate and that includes everyone’s concerns. We have to make parallels between race and gender so that people easily understand that we take their human rights seriously.

In Mississippi, voters are asked by our mutual opponents to vote yes to support a deeply flawed, unconstitutional ballot initiative (No 26) defining the fertilized egg as a so-called “person” from the moment of conception. This creates dangerous unintended consequences for women, doctors, families, and communities. It will force young girls to have kids and may outlaw basic services like birth control pills and emergency contraception. Ironically, it will also prevent women who want to become pregnant from using in-vitro fertilization (IVF).

Similarly, consequences for Voter ID are grim. If people are kept from voting–because of the lack of government ID or missing birth certificates–then Mississippi returns to the sixties when voter denials based on race and gender were common and mocked our democracy.

What can we do to make our collective effort stronger now?

In message trainings, experts say to start with where the audience is, and then move them to where we want them to be. If campaigns are about communications, then our messages must link the racial and gender politics of Mississippi.

To be sure, as the New York Times reported on October 25, anti-choice sentiments cross party and racial lines. But as an activist who has worked more than 35 years in this movement, I don’t assume that when some African Americans say they are “pro-life” that they mean implacable opposition to abortion. In fact, there are many circumstances, including saving a woman’s life, helping victims of rape or incest, or reducing the number of kids raising kids that are strong values in the African American community, convincing its members to be both pro-choice and pro-life. They have complicated positive and negative feelings about abortion, like most people.

However, when it comes to passing laws controlling other people’s bodies and choices, the needle strongly moves to our side because African Americans have an atavistic rejection of anything resembling enslavement. We know that story very well.

A simple message might be: Vote NO! Save the Pill on 26! Save the Vote on 27! Or TWO NO’S MAKE A RIGHT! Clear, consistent, concise. While these types of messages lack the nuances that we who use too many words may prefer (and we know who we are!), they are simple, consistent and easily remembered memes for our audiences. We can add nuances in face-to-face and phone conversations because personal voices and heartfelt convictions are sincere in our grassroots mobilization efforts.

Both messages carry with them our central theme of unintended consequences. The supporters of both initiatives would rather ignore the probability that birth control will be outlawed and the probability that voters without birth certificates could not vote. If women are investigated for miscarriages, women of color will be the first and majority of the casualties of the co-called “personhood” initiative. If the Voter ID Initiative passes, it is highly likely that the voters most affected will be voters of color. We know this in our guts. Now we have to believe it with our higher reasoning brains.

In Mississippi, the proponents of the No On 26 campaign are listening and things are changing. Information linking 26 and 27 now appears on literature by the statewide campaign, Mississippians for Healthy Families (MHF). Forums in black churches are jointly planned by both initiatives for the week before the election. The Feminist Majority Foundation sent campus organizers who immediately started organizing on both ballot measures by distributing literature on both initiatives. The grassroots movement that Allison Korn from National Advocates for Pregnant Women spoke about in her earlier article on RH Reality Check is a strong testament. We must celebrate all sides coming together on the proverbial common ground.

These efforts to reach unity are welcome but come nearly at the goal line, if you will forgive the football analogy from a sports fan. How much more powerful and prepared could we have been together if we had recognized this incredible opportunity earlier?

Southern African American activists have been sounding the alarm to invest much-needed dollars at the grassroots level in Mississippi and throughout the South for quite some time, recognizing that the Civil Rights movement is not over and that the Women’s Rights movement is embryonic in our region. Those fighting against voter ID initiatives around the country and especially in Mississippi are clearly under-funded and lack the resources to provide their own polling research, campaign offices, phone banks, etc. We have been forced to do “quick-fix” organizing and mobilizing in Mississippi; had the call of African American reproductive justice activists been heeded, we could have been stronger and united as two movements working together to save women’s lives and women’s votes.

In some ways, it’s ironic that when anti-abortion groups like the Radiance Foundation that put up the billboards accusing black women of committing genocide, the Trust Black Women Partnership easily decoded their fundamental message–they don’t trust black women. We cannot afford to send the same message–we don’t trust black women to understand the African American community.

Our movement must learn the difference between the language of respect vs. the discipline of respect. Public displays of privilege, empty rhetoric and group-think jeopardize our chances for success.

We have known for a year–probably back to 2009–that Mississippi would be a battleground in our fight. After the election, we must work together to overcome our reluctance to talk about what we did or didn’t do, regardless of the outcome.

My fear is that if we win, some folks will fail to acknowledge that African American voters delivered the victory. If we lose, then some may say it was similar to the California gay marriage ballot that some falsely claim was lost because of the black voters in California. In reality, it is the failure of those who run campaigns based on outdated campaign models to invest sufficient resources in the African American community to swing the pendulum our way among some of the most consistent and committed voters on human rights issues.

Obviously, as I write this article I do not know whether we will win because we are only days from the election. But my stomach is churning with anxiety because I care so much. I’m part of a movement of black and white women who need to make a case study of Mississippi to learn what we need to do together when race intersects with abortion politics around the country. Other so-called “personhood” and voter ID efforts will proliferate in 2012.

As Celie famously said in The Color Purple, “Until you do right by us, nothing will go right for you.” To be heard, do black women have to bring Nina Simone back to sing her famous song about Mississippi?

Excerpted from a post originally published at RHRealityCheck. Read the full version here.

This post is part of the #HERvotes blog carnival on the Mississippi Personhood Amendment.