Rush Limbaugh: The Descent of (One) Man - Ms. Magazine
Skip to content 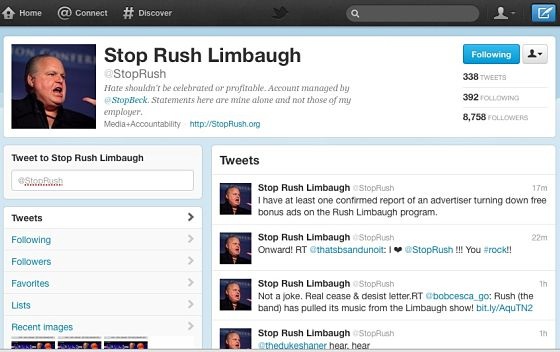 Feminist victories continue to pile up in the wake of Rush Limbaugh’s attack on Sandra Fluke, the Georgetown law student who testified in favor of the Affordable Health Care Act’s contraceptive coverage regulation and was subsequently labeled a slut and a prostitute by the broadcaster.

The social media response was immense: the #FlushRushNow campaign on Twitter, the activism of tweeters such as @Boycott Rush and @StopRush, petitions started by UltraViolet, ThinkProgress and individuals such as Jodi Jacobson, plus numerous calls to action on Facebook, convinced  sponsors of Limbaugh’s radio show to swiftly desert him. The total number of advertisers to withdraw currently stands at 36, with more expected to follow.

Limbaugh issued an apology, but his statement could hardly be construed as anything approaching genuine contrition. Far from acknowledging his grossly inappropriate language, he brushed it off by claiming, “I chose the wrong words in my analogy of the situation.” Further, he added, “I did not mean a personal attack on Ms. Fluke.” But even a kindergartner could tell you that when you call someone names (and, say, ask them to post sex tapes on the Internet, as Limbaugh also did), it surely is an attack, and surely personal.

Limbaugh finished his mea culpa with a surefire method for weaseling out of misogynistic responsibility–the “I was only joking” stratagem: “My choice of words was not the best, and in the attempt to be humorous, I created a national stir.” All this before he even got around to uttering the words “I … apologize.”

If you agree that Limbaugh’s comments and his subsequent failure to take responsibility for them are reprehensible, you may want to drop a line to the companies who have withdrawn support from Limbaugh’s show and thank them for their commitment to respecting women.

The fight is not over, however. As of this writing, Limbaugh still retains sponsorships from Insperity, Amberen, United Health Care Group, Mission Pharmacal Company, Life Quotes Inc., Lear Capital Inc., Mid-West Life Insurance Company of Tennessee and the American Forces Network. Find out how to contact these companies and ask that they stand by women here.

In an interesting move, Michael O’ Shea, the president of KGMI Radio, which airs The Rush Limbaugh Show, has openly asked the public for feedback on the issue–feel free to give him a piece of your mind here.

If any further proof were required about Limbaugh’s paleolithic attitude towards women, he demonstrated it again yesterday when he mused on-air, “What is it with all of these young, single white women? Overeducated doesn’t mean intelligent.” (He was referring to award-winning investigative journalist Tracie McMillan, author of the new book The American Way of Eating.) It would appear Rush Limbaugh has no intention of curtailing his attacks on women; therefore no feminist should back down from challenging his misogyny.

Above: screenshot of the Twitter feed Stop Rush Limbaugh.