"We Are All Amina Filali" - Ms. Magazine
Skip to content 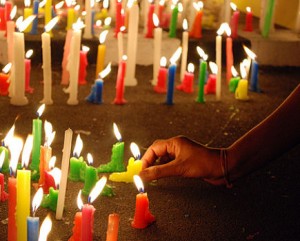 Fury resounds in the blogs and tweets of feminists online in response to the tragic suicide of a 16-year-old Moroccan girl, Amina Filali, who swallowed rat poison rather than remain married to a man who had raped her.

Filali, who was raped by the man–10 years her senior–in 2011, was encouraged by the prosecutor of the rape case and the Moroccan government to marry the perpetrator. Her father said that his daughter’s rapist initially refused the marriage contract until faced with the alternative of spending 10 to 20 years in prison. During the five months of their marriage, Filali’s husband physically abused her repeatedly.

Article 475 of the current Moroccan Penal Code includes a provision which allows the “kidnapper” of a minor to marry the victim in order to restore honor to the woman and her family. The government justifies this by insisting that the decision to marry is based entirely on the victim’s consent. In this case, Filali’s consent was suspect, considering her parents’ embarrassment and the stigmatization of rape victims in her culture.

Women’s rights leaders in Morocco say that they’ve long sought more legal protection for women who are domestically abused and sexually harassed or assaulted. Legislative proposals to provide safety for women who face violence, including marital rape, have been “stuck” in government review since 2006. Said Fouzia Assouli, president of the Democratic League for Women’s Rights,

In Morocco, the law protects public morality but not the individual. We have been asking for years for the cancellation of Article 475 … which allows the rapist to escape justice.

There is currently no law in Morocco specific to violence against women. The Human Rights Watch 2012 World Report says that although major reforms have taken place in Morocco regarding the 2004 Family Code, provisions involving inheritance and a husband’s right to “unilaterally repudiate” his wife were left unchanged.

A study released by the UN in 2011– the first of its kind on gendered violence in Morocco–notes that in 2010, approximately 60 percent of women between the ages of 18 and 65 reported having encountered some form of violence, and 1 in 4 of those cases experienced sexual violence. Divorced women in the workforce and unemployed women are most vulnerable to aggression and abuse, the study shows, and it is more common for women with illiterate husbands to experience domestic abuse.

As part of the international outcry against Filali’s tragic death, protests are planned in Morocco for this Saturday, March 17. The Facebook page “We are all Amina Filali” has been created, and a petition on the page calling for an end to Article 475 and justice for victimized women has obtained more than 1,000 signatures. You can add your name as well to speak out against this tragedy.