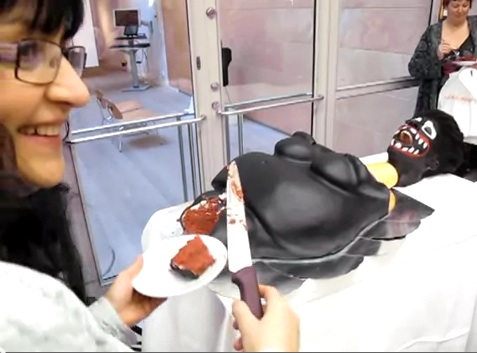 The performance featured a black-iced cake in a caricature of an African woman’s torso, complete with protuberant breasts and a bulging stomach. Forming her “head” was Linde’s actual head, made up in grotesque blackface. As museum guests cut slices of the torso’s nether regions, they revealed red spongecake that mimicked a woman’s bloody insides, and Linde simulated screams of pain and agony.

A YouTube video of the event that went viral earlier this week sparked international outrage:

According to Linde, the purpose of the piece is to raise awareness about female genital mutilation on the African continent. Of course it’s hard to grasp that meaning when the mostly white guests in attendance are blithely cutting into the cake, taking pictures on their mobile phones and smiling and laughing at the spectacle.

Because Afro-Europeans are currently dealing with an upsurge in racist sentiments and incidents, I’m hesitant to project my own African American point of view by simply dismissing the ironic effect of Linde’s piece. The artist has long made use of blackface and Golliwog imagery, placing them onto European artifacts in a sort of blackfaced graffiti, literally “tagging” whiteness and disrupting so-called racial purity. Such cultural provocations may indeed be necessary to disrupt the complacency of Scandinavian societies, which have often viewed themselves as less racist in comparison to the United States or to Nazi-era Germany.

Strikingly, this Swedish art controversy had erupted just as Anders Behring Breivik goes to trial for killing 77 people in a terrorist attack that was couched as white supremacist “resistance” to Norway’s increasing multiculturalism. Such incidents are reminders that, even in countries that are considered progressive in their gender politics, the racial body politic is tearing at the seams. Obviously, no country–no matter how “progressive”–is immune to racism and sexism. If Linde wants to mock European fascination with, contempt for or indifference toward African concerns, then simulating cries of pain while his white guests gleefully cut away at a figurative black female vulva speaks volumes.

Presenting a caricatured “African” female body at a white-attended museum event also calls attention to a long history of black women’s bodies being displayed as specimens. Take Saartjie (Sarah) Baartman, a native South African woman who lived during the early 19th century. Baartman was exhibited as the “Hottentot Venus” before white audiences in London and Paris, and her genitalia was posthumously “carved up” by scientists and placed in a jar for public viewing. Linde’s performance makes the treatment of Baartman feel much less comfortably like something in the past.

However, even if the cake succeeds as a critique of Western perceptions of Africa, there are other layers of sheer wrongness.

What is the impact of a male artist pretending to feel pain when others cut into his “vagina”? Can that possibly represent the real pain women endure during female genital cutting? And why were the white women present at the performance, including Minister of Culture Lena Adelsohn Liljeroth, not at all visibly disturbed by this male simulation of female pain? Would they have been comfortable if the cake’s icing was white or pink? Is it so easy not only to gaze upon black stereotypical imagery but also to literally consume it? Their smiling faces demonstrate how quickly racialization can undercut solidarity and empathy.

Then there’s the idea that the art brings awareness to female genital mutilation, also known as female genital cutting (FGC). Presenting such a serious issue–which impacts millions of women throughout the world–at an art party, via a cake, diminishes it for comic effect. At the same time, the issue of FGC has become so aggrandized in Western understandings of African women’s lives that, according to sociologist Connie G. Oxford, immigrant and refugee women from the African continent can claim political asylum on the grounds of FGC, even if they fled their country for an entirely different reason. Where these women’s experiences with genocide, political persecution and ethnic intimidation may have no political resonance for Westerners, an experience with female circumcision–even during infancy–can be enough to receive asylum.

This is not at all to diminish the problem of FGC. Women and men in communities throughout Africa have raised awareness and engaged in numerous struggles to outlaw the practice. But when FGC is the only way African women’s bodies are understood from a Western perspective, one could see how Linde, despite his clumsy presentation, might seek to take Europeans’ gaze on African women’s bodies and turn it against them.

Nonetheless, when this art moves transnationally via social media, does artistic intent matter? Or do our gazes on it change the meaning? Whatever the intent of the piece, once you have seen the video there is no denying that racism and sexism still exist and intersect. There is no forgetting that, somewhere in this world, a woman’s private parts are being maimed–whether in genital surgeries or in acts of sexual violence. And somewhere else in the world, other women are privileged enough to ignore these realities–especially when racial differences are involved–so that they can simply eat cake.