Chick-fil-Gay: Being Anti-Same-Sex Marriage is Bad for Business - Ms. Magazine
Skip to content 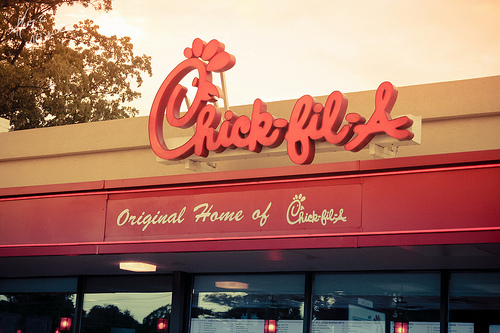 It doesn’t pay to be anti-gay. Especially if you’re Chick-fil-A.

Last week, Dan Cathy, president of the fast food chain known for its chicken sandwiches and Southern fried Christian values, told the Baptist Press that he is “guilty as charged” of supporting the “traditional family.” In other words, he and his company are against same-sex marriage.

In 1967, when the first Chick-fil-A opened in Atlanta, such unapologetic anti-gay prejudice (despite a backpeddling statement saying they will “leave the policy debate over same-sex marriage to the government and political arena”) might have gone unnoticed. It might have even brought in more customers.

But the tide is turning for most Americans’ view of gay rights. After President Obama’s same-sex marriage endorsement, polls show a majority of Americans support them as well. And those folks certainly don’t appreciate Chick-fil-A’s bigotry.

Neither does the mayor of Boston, who vowed to ban the chain from opening in his city, or Chicago Mayor Rahm Emanuel, who told the Chicago Tribune that “Chick-fil-A values are not Chicago values.” Comedian Roseanne Barr added her unique take on the controversy via Twitter, and The Jim Henson Co., producer of The Muppets” TV show and characters who had been working with the chain to make toys for its kids meals, said on its Facebook page that they are ending their partnership with the company.

After 40 years of growing success, Chick-fil-A should know how to do business. Christina Pesoli tries to make sense of Cathy’s motives in the Huffington Post:

[Chick-fil-A] has over 1600 ‘restaurants’ nationwide, and the company generally seems to be doing well. But publicly taking a controversial position on the biggest civil rights issue of our time doesn’t exactly seem like a smart business move.

Despite better business judgment, other companies and organizations have made their homophobic views public knowledge as well. Last month, Major Andrew Craibe, media relations director for Salvation Army Australia, embroiled the Christian charity in an anti-gay firestorm, insinuating that gays should be put to death. Two days later, the organization issued an apology, calling the comments a misunderstanding–yet the second largest charity in the U.S. has a history of anti-gay policies, The New York Times reported last year. Furthermore, major companies such as Wal-Mart and Urban Outfitters have been shown to donate money to anti-gay organizations. Others, such as ExxonMobil, discriminate against LGBT employees.

Boycotts from gays and straight allies might not make a significant difference in sales for Chick-fil-A and others, but as support for gay rights increases, anti-gay companies may lose ground to more accepting organizations. Target realized this back in 2010, when news of the company’s $150,000 donation to an anti-gay organization in Minnesota earned them major backlash from gay rights groups. Earlier this year, Target launched a special collection of gay pride t-shirts and pledged to donate more than $100,000 of the proceeds to a pro-marriage-equality group.

Anti-gay companies often hide behind “Christian” values, citing scripture as the inspiration for hate. But running a company on “biblical principles,” as Cathy claims Chick-fil-A does, isn’t synonymous with anti-gay policies–just as being Christian doesn’t mean being anti-gay. Discriminatory policies, even veiled by religion, will never help a company’s bottom line, and certainly won’t advance “Christian” values of tolerance and acceptance.

Photo of Chick-fil-A restaurant by hectorir via Creative Commons 3.0