Did You Know? You Should March for Women's Rights Tomorrow - Ms. Magazine
Skip to content 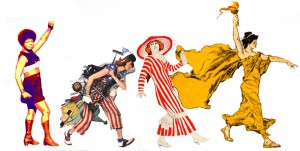 Check out our exclusive interactive slideshow below for all the facts you need on reproductive rights, health care and equal pay.

2012 will certainly be known as the year of women. With the upholding and subsequent enactment of the Affordable Care Act’s HHS mandate, women have gained a major health care advancement. But as the War on Women wages on in Congress and throughout the country—in the form of abhorrent abortion laws, state cuts to Medicaid and the failure of the Paycheck Fairness Act, to name a few—there is still much at stake.

“Women have become complacent over the last 20 years,” says We Are Woman cofounder Jenni Siri. “It’s unfortunate that it has taken horrific legislation and other actions to ignite interest in women’s rights again.”

That interest has sparked a call to action. Last winter, we saw the power of a silent protest in Virginia, where thousands of women compelled the state legislature to alter its mandated transvaginal law. In the spring, Unite Against the War on Women rallies sprouted up in more than 45 states. And tomorrow, We Are Woman, a new grassroots feminist-activist group, is staging a large-scale rally and march on the west lawn of the Capitol Building in Washington, D.C. The rally, which is expected to gather thousands of women protesters, will focus on three issues: reproductive freedom, equal pay and the ratification of the Equal Rights Amendment. But most important, it will highlight what women have to lose in the upcoming presidential and congressional elections, and serve as a rallying cry for women to get out and vote come this November.

“Silence equals compliance,” says We Are Woman volunteer Alaina LaTourette. “If you don’t like what’s going on, get up and do something about it.”

Photo courtesy of We Are Woman.

About Lauren Barbato and Lisa Huynh