These Young Feminists Took on Abusive Trolls on Their Campus—and Won - Ms. Magazine
Skip to content

The posts included threats of rape and murder against them and other members of the student group Feminists United on Campus, an affiliate of the Feminist Majority Foundation (FMF). Members of the group were targeted because they spoke out against sexual violence and questioned a proposal to allow fraternities on campus.

When the students reported the harassment, UMW administrators never investigated or tried to identify the harassers, nor did they report the harassment to law enforcement for investigation. Instead, they suggested that the students contact Yik Yak themselves. “They threw up their hands and gestured to the First Amendment,” Musick says.

The abuse continued. Terrified, the students withdrew from campus activities and spent more and more of their time at home. Eventually, they sued.

In its groundbreaking decision in Feminist Majority Foundation et al v. University of Mary Washington, the 4th
U.S. Circuit Court of Appeals ruled in December that universities must investigate and take action on anonymous, online sexual harassment and threats—it’s the first appellate court in the country to do so.

“In a very strong rebuke to the University of Mary Washington, the court made clear that universities must be responsive to the realities on the ground and to the changing technologies. Universities cannot duck behind weak excuses that they lack control over cyber harassment or that they cannot act because they don’t know the identity of the harassers,” says attorney Debra Katz, who represented the FMF, Feminists United and the five named students.

A recent Pew study shows that two-thirds of young adults ages 18 to 29 have been subject to some type of online harassment. According to Neena Chaudhry of the National Women’s Law Center (NWLC), this behavior is disproportionately targeted at women, people of color, LGBTQ individuals and people with disabilities. “Anonymous online harassment is the new frontier for harassment that [disrupts] educational opportunities for students,” Katz adds. “It must be stopped.”

For months, the UMW students experienced relentless harassment— more than 700 messages, including threats of physical and sexual violence—to “euthanize,” “kill” and “[g]rape” them (short for gang rape). “We were being inundated by digital violence,” Musick says.

Some of the students had to seek medical care for stress and depression. “The anonymity of the threats and the harassment exacerbated our fear,” Musick says. “Because if you know the person who is targeting you, you cando things to mitigate that; you can seek remedies. We didn’t know if the 700 or more harassing or threatening posts were from one person or 700
people. We had no idea what to expect or anticipate.”

Katz concurs. “In many ways,” she told Ms., “online harassment is much more frightening than someone standing in the university quad with a bullhorn saying horrible things. Because then you know who it is.”

In addition, male students screamed at the feminist students while driving by, while others posted anonymous derogatory, sexist and threatening
comments on Yik Yak in response to an op-ed by McKinsey.

Instead of investigating the harassment, then-UMW president Richard Hurley downplayed the seriousness of the threats. In reference to one post that said, “Gonna tie these feminists to the radiator and [g]rape them in the mouth,” Hurley responded that the comments “appear alarming in isolation, but must be placed in context,” noting that they were references to popular culture.

“There is such a normalization of violence against women and hatred against women,” McKinsey told Ms. “It’s absolutely not taken seriously. It’s seen as a joke or as something we’re blowing out of proportion.” Musick condemned the university’s dismissal of the real-life consequences of threats occurring on social media. “If we received 700 handwritten notes taped to our door over five months, I think that the response would be different.”

The 4th Circuit Court of Appeals agreed. The court ruled that Title IX and the Equal Protection Clause of the 14th Amendment to the U.S. Constitution require schools to address cyber harassment, and that threats to kill or injure others are not protected by the First Amendment, noting that the university administrators would not have raised a free speech defense for students making anonymous bomb threats. According to the court, UMW should have taken actions to address the harassing behavior, including attempting to identify the students who posted harassing messages, and administrators should have more clearly communicated to the student body that the university would not tolerate sexually harassing behavior in person or online.

UC Berkeley Law School Dean Erwin Chemerinsky, who argued the case before the 4th Circuit, says that the decision “clearly and unequivocally says that colleges and universities must protect their students from sexual harassment, even when it’s anonymous over social media.” He is confident that “as schools learn of the decision, it will really change [their] behavior.”

Just in time, says Chaudhry of the NWLC, which filed an amicus brief in the case. “Especially now, when we have a Department of Education under Secretary Betsy DeVos, who is weakening Title IX protections, it is so gratifying that the courts are upholding the law and recognizing that Title IX was intended to be broad and cover any form of discrimination that interferes with students’ ability to learn.” The decision reminds us, says Feminist Majority Foundation president Eleanor Smeal, that “we have rights under the Constitution, and we have rights under Title IX.”

Attorney Katz warns: “Every university and every college across this country must take note because if they do not, they will have legal liability and we as a group will continue to sue every university that does not heed the call.” Adds survivor McKinsey: “Harassment in any forum, whether it’s face to face or online, has no place in higher education and no place in society.”

This piece appears in the Spring 2019 issue of Ms. Become a member today to read the rest of the issue! 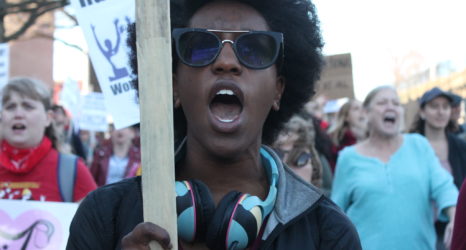 The Danger of the Trumped-Up Men’s Rights Movement