From Y2K to Today: a Timeline of Celebrity Feminism Over The Last Two Decades - Ms. Magazine
Skip to content

The movement that was once declared “dead” by Time in 1998 took on new life in the millennial era, thanks to social media. And while a fixture in feminist blogging, Feministing, is ending its run after 15 years at the close of 2019, never have feminist ideas seemed more mainstream, celebrated by celebrities to women in public office to athletes to fashion house designers.

Is this a case of commercialized feminism distorting a radical idea, or is there breeding ground from which a more radical strand might spring?

Given recent activism on the part of celebrity women—from the #MeToo movement to the Time’s Up Campaign—it’s easy to forget there was a time not that long ago when the link between fame and feminism was viewed with suspicion and even incredulity. (Think of bell hooks’ resistance to Beyoncé’s feminist claims, even as she’s willing to embrace Emma Watson‘s more academic approach to feminism, or of Bitch Media co-founder Andi Zeisler’s criticism of “marketplace feminism,” or writer Roxane Gay’s assertion that celebrity feminism could only be a “gateway” to a more “authentic” feminist movement.)

But celebrity feminism is proving to be a force for change—and an evolving, ever-growing political process. Here, we chart its evolution over this millennium. 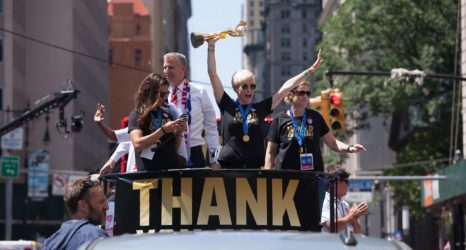