Title IX: A Milestone for Women in Sports, But Unfulfilled Promise for Black Women - Ms. Magazine
Skip to content

The month of June marked the 48th anniversary of the passage of Title IX, the foundational civil rights law that stipulates:

“No person in United States shall, on the basis of sex, be excluded from participation in, be denied the benefits of, or be subjected to discrimination under any education program or activity receiving Federal financial assistance.”

LaChina Robinson, who moderated the event, recognized the conversation surrounding women of color in sports uniquely amplifies the discrimination that women of color, who she identified as a “double minority,” face. In reality, Title IX doesn’t eliminate the racism and sexism that Black women fight in the athletic world. Black women athletes continually face disparate visibility, opportunity and exposure, compared to their white teammates.

King described Title IX as one of the most important pieces of legislation championing equality and said the 37 words of the Title IX legislation are some of the most fundamental in the history of women’s sports.

However, it does not protect all girls equally, not yet.

“Girls of color continue to be underserved and overlooked,” King remarked—yet society is universally better off when everyone is given both opportunity and a loud voice. And for that to be accomplished, we have a great deal more to do.

A staggering 42 percent of schools are either composed of 90 percent white students, or 90 percent students of color, #TheEquityProject and Women’s Sports Foundation point out. Robinson compared this extreme separation to “modern day segregation.” And since populations are not evenly distributed, neither are opportunities.

And states do not allocate funding in equitable ways, added Neena Chaudhry, general counsel and senior advisor for education at the National Women’s Law Center Time. This means time and time again, we see districts with a greater population of students of color receiving less funding.

Sarah Axelson, senior director of the Advocacy Women’s Sports Foundation, argued that action on the community level is key in identifying and dismantling the root of inequity in sports.

“We need to build a pipeline,” she said, by educating parents and making sure individuals are aware of the importance of sports. Parents are often less inclined to prioritize sports for their daughters, so “it’s about finding girls where they are” and improving visibility and education.

Even though Title IX provided and still provides massive reform for women in sports, the primary beneficiaries are white suburban women. Axelson spoke to the necessity of widespread action: “This is on all of us. It is a systemic issue.”

Among the panelists was WNBA Champion and two-time MVP Candace Parker. Parker spoke about the power sports has to draw a roadmap for greater societal institutions: “Exposure breaks down barriers.”

The Women’s National Basketball Association (WNBA) is made up of 80 percent Black players—yet only four coaches out of 12 are women, and zero of those four coaches are women of color.

Black women are the “majority of the minority” in the WNBA, Parker explained, yet their leadership is not reflective of that fact.

Representation is key in uplifting women of color in sports—and she called for action on this front, saying there “needs to be a conscious effort to put women on the forefront.”

Additionally, 56 percent of all Division 1 female student-athletes are white compared to 21 percent Black. And due to systemic injustice, white Division 1 athletes have far greater opportunities than their Black teammates.

It is evident that women of color face higher rates of sexual harassment and violence. Women in general, and Black women in particular, are blamed, punished, and shamed for filing claims based on racist and sexist discrimination. Chaudhry urges people to elect leaders at every level who will work to end discrimination, and to hold those leaders accountable.

Dawn Staley, head coach of women’s basketball at the University of South Carolina, explained the importance of encouraging more women to participate in sports: “Because of basketball and the opportunity to play, I’ve traveled, seen the world, met people from all walks of life. … If more girls were able to pick that basketball up, we could’ve done it together.”

She stated that even though women of color are not awarded the same opportunities as white women, they continue to utilize what resources are available and persevere.

“As people, we are resourceful. We find a way,” Staley said.

She continued by describing the disadvantage and hardships women of color face: “Girls of color playing in sports are the severe minority. Not only are you breaking glass ceilings and playing. You will be ridiculed.”

She ended by encouraging women of color to fight: “If given the opportunity, girls of color would excel.”

Jenna Ashendouek is an editorial intern at Ms. and a student at Tufts University pursuing a BA in International Relations with a minor in Women, Gender, Sexuality Studies. 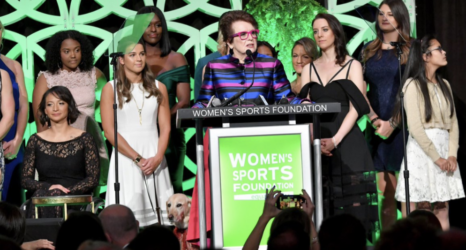 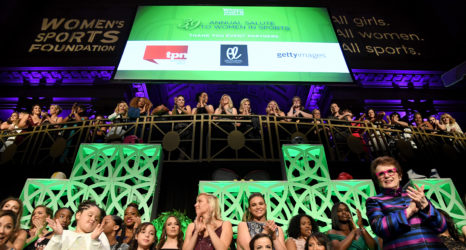 Celebrating Inspiring Women in Sports (and the Girls Looking Up to Them, Too)