As Trump Doubles Down, Courts Side with Immigrant Women Seeking Asylum - Ms. Magazine
Skip to content

Over the past two years, the Department of Justice eroded protections for survivors. But this month, the efforts of immigration advocates paid off in a series of victories.

Refugee survivors of domestic violence were among the first targets in the Trump administration’s sustained assault on our asylum system.

Over the past two years, restrictive Department of Justice decisions have severely eroded protections for survivors. And earlier this summer, the administration announced binding federal regulations—dubbed the “death to asylum” by advocates—that could codify these rulings and shut the door for good.

Communities and advocates have been fighting back every step of the way. This month, we saw our efforts pay off in a series of victories at the Ninth Circuit, which overturned three lower court decisions denying asylum to women seeking refuge from domestic violence in Central America and Mexico.

These victories are the culmination of two years of tireless litigation launched in response to the most significant blow to asylum dealt by Jeff Sessions during his tenure as attorney general. Back in 2018, Sessions personally intervened in the asylum case of a Salvadoran woman, using it as a vehicle to reverse decades of hard-won progress for refugee survivors.

In a decision known as Matter of A-B-, Sessions declared that “generally,” domestic violence survivors should no longer qualify for asylum protection. The ruling sent shockwaves through immigrant communities and led to a sharp downturn in asylum grant rates around the country.

The three women whose cases came before the Ninth Circuit this year are among the many survivors who have suffered the fallout of the Matter of A-B- ruling.

The Ninth Circuit turned first to the case of Sontos Maudilla Diaz-Reynoso, an indigenous Mayan woman who fled Guatemala after enduring four years of unrelenting abuse at the hands of her common law husband, who raped her, beat her, and frequently forced her to work in coffee fields without pay. Local authorities in Guatemala ignored Diaz-Reynoso’s repeated pleas for help.

She was met with similar indifference when she sought protection in the U.S.: Diaz-Reynoso’s immigration judge rejected her case after only a cursory review of her claims.

When she took her case to the Board of Immigration Appeals—an appellate body overseen by Trump’s Department of Justice—Diaz-Reynoso was already facing an uphill battle. Then Matter of A-B- came down.

The Board interpreted Sessions’ ruling in A-B- to impose a complete ban on domestic violence-related cases like Diaz-Reynoso’s, denying her protection without evaluating her case fairly. In its hasty assessment, the Board failed to consider social and economic factors that had made it impossible for Diaz-Reynoso to escape her abuser in Guatemala. The Board also completely ignored evidence of the Guatemalan authorities’ inaction, which had left Diaz-Reynoso with nowhere to turn.

Fortunately, the Ninth Circuit repudiated this approach: On August 7, the court reversed the Board’s ruling and declared unequivocally that the Trump administration cannot use Matter of A-B- as justification to single out domestic violence survivors like Diaz-Reynoso for discriminatory treatment.

At its heart, the Ninth Circuit’s precedent decision in Ms. Diaz-Reynoso’s case reiterates a fundamental tenet of asylum law: that judges must carefully review the facts and evidence presented by each asylum seeker and must not inappropriately prejudge cases.

Like Diaz-Reynoso, these women—one seeking asylum with her teenage daughter—had been denied protection by the Board, with the appellate judges relying on Matter of A-B- to decide their cases without giving them due consideration.

Citing to the Diaz-Reynoso ruling, the Ninth Circuit affirmed again that survivors must be provided a fair opportunity to have their asylum claims heard and sent the cases back to the Board to be reconsidered.

These decisions are the latest in a series of recent appellate court rulings roundly rejecting the Trump administration’s attempts to exclude survivors. Earlier this year the First and Sixth Circuits overturned asylum denials in two similar cases.

And just a few weeks ago, the D.C. Circuit Court struck down cruel policies that had allowed the administration to use Matter of A-B- to turn survivors away in initial border screenings.

For Jenni Menjivar, an asylum seeker and leader at Mujeres Unidas y Activas, these developments are reason for tentative optimism. After fleeing an abusive relationship in El Salvador and enduring a harrowing stint in a hielera at the U.S. border, Menjivar—like many asylum seekers—was forced to represent herself and her young daughter in immigration court, where they lost.

Now Menjivar has an attorney, who has helped her appeal the immigration judge’s denial of asylum.

“Hearing that the Ninth Circuit has overturned the decisions in cases similar to mine gives me hope for my own case,” Jenni said this week. “Now my daughter and I might have the opportunity to stay in this country that we now call home.”

Although the courts have not yet overruled Matter of A-B- in its entirety, this recent spate of victories has significantly limited the decision’s reach.

Seeing the writing on the wall, the administration is now seeking to codify A-B- in their sweeping “death to asylum” regulations. If adopted, these regulations could undo the progress we’ve made and leave courageous women like Jenni with no path to safety.

But once again, our communities are coming together to fight back. In July members of the public submitted over 86,000 comments expressing opposition to the regulations and demanding that our government keep the door open for refugee survivors and others who continue to turn to the United States for protection.

The administration’s timeline for finalizing their death to asylum regulations is unclear. But in the meantime, women like Menjivar may finally get their fair day in court.

About Brianna Krong and Blaine Bookey 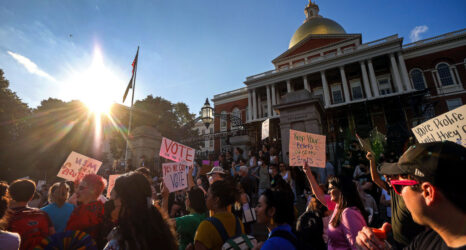 50 Different State Courts and Constitutions Will Now Decide Who, If Anyone, Can Get Abortions

In Absence of Roe, Healthcare Providers Have a Professional and Ethical Duty to Step Up
‘Good Luck to You, Leo Grande’: Pleasure as a Path to Wholeness
The Overturn of Abortion Rights Cannot Be Minimized