Ruth Bader Ginsburg's Legacy—as a Lawyer, on the Bench and in Dissent - Ms. Magazine
Skip to content

Justice Ruth Bader Ginsburg has had a tremendous impact on the law, both as a lawyer and as a judge, for women’s rights and the rights of all people.

As founder and director of the ACLU’s Women’s Rights Project, Ruth Bader Ginsburg made Pauli Murray’s visionary interpretation of the Fourteenth Amendment the law on the land. With creativity and brilliance—for example, she brought cases on behalf of men alleging sex discrimination to persuade an all-male Court—Ginsburg convinced the Supreme Court to interpret the Constitution to prohibit sex discriminatory laws.

In the 1970s, Ruth Bader Ginsburg won a series of cases that established that sex discriminatory laws violated the Constitution’s guarantee of equal protection of the laws.

In the 1971 case of Reed v. Reed, Ginsburg argued that an Idaho law preferring fathers over mothers to administer a child’s estate violated the Fourteenth Amendment Equal Protection Clause. For the first time in history, the Supreme Court struck down a law as arbitrary and not based on legitimate objectives.

Finally, in the 1976 case of Craig v. Boren, the Supreme Court ruled that an Oklahoma law prohibiting the sale of 3.2 percent beer to males under the age of 21 and females under the age 18 violates the 14th Amendment Equal Protection Clause. This case established that sex discriminatory laws are presumed to be unconstitutional and that, to allow such a law, the government must prove that the classification is substantially related to an important statutory objective. In the case, Ginsburg advised the plaintiff’s attorney, submitted an amicus brief, and was present at counsel table during oral argument before the Supreme Court.

Ginsburg continued to participate in cases strengthening this precedent, such as Duren v. Missouri (1979) relating to women serving on juries and Orr v. Orr (1980) involving alimony.

Ginsburg also challenged North Carolina’s eugenics program in the 1973 case of Cox v. Stanton. Under the program, the state forcibly sterilized over six thousand women and girls, most of them Black women, all of them poor, purportedly because they had mental disabilities. North Carolina officials told the teenage plaintiff Nial Ruth Cox and her mother that the operation was revisable and that the family would be cut off from welfare benefits if she didn’t consent to the operation. Ginsburg won the right to sue in 1975, but by then North Carolina had ended the program.

Ruth Bader Ginsburg became a D.C. Circuit Court Judge in 1980, serving there for 13 years before ascending to the Supreme Court in 1993. In this role, she authored many significant decisions, including in the areas of equality in education, disability rights and environmental pollution.

In United States v. Virginia (1996), Justice Ginsberg wrote for a 7-1 majority of the Court that the Virginia Military Institute’s male-only admissions policy violated the Equal Protection Clause of the Fourteenth Amendment. In that decision, she wrote that single-sex education “must not rely on overbroad generalization about the different talents, capacities, or preferences of males and females” and that “categorization by sex may not be used to create or perpetuate the legal, social, and economic inferiority of women.”

Justice Ginsburg rejected Virginia’s attempt to set up an alternative school for women based on generalization about “the way women are” and justified by alleged differences between men and women. Justice Ginsburg argued that estimates about what is appropriate for most women no longer justify denying opportunity to women whose talent and capacity place them outside the average description.

In Olmstead v. L.C. (1999), Justice Ginsburg issued a groundbreaking disability rights decision interpreting the 1990 Americans with Disabilities Act to require states to place persons with mental disabilities in community settings rather than in institutions, thereby eliminating unnecessary segregation and providing services to people with disabilities in the most integrated setting appropriate to their needs. This decision later became the cornerstone of an Obama-era nationwide program to enforce integration.

In Friends of the Earth v. Laidlaw Environmental Services (2000), Justice Ginsburg refused to dismiss the case as moot a case involving an egregious pollutor because the defendant complied with the law after the litigation had begun, arguing that civil penalties could deter future violations.

In addition to her majority opinions, Justice Ginsburg wrote an important concurring opinion in the 2016 abortion rights decision of Whole Women’s Health v. Hellerstedt, even more critical of the Texas law at issue than the majority opinion. Justice Ginsburg argued, “it is beyond rational belief that H. B. 2 could genuinely protect the health of women” and that the law “would simply make it more difficult for them to obtain abortions.”

Justice Ginsberg also authored many famous dissents. As the Court moved to the right over the years, RBG became famous for her dissents—including in cases involving the 2000 presidential election, equal pay, voting rights and reproductive rights.

In Bush v. Gore (2000), a majority of the Supreme court gave the election to Bush by ruling that the Florida Supreme Court’s mandate for a manual recount of votes was unconstitutional and that there was no alternative way to recount the votes. Justice Ginsburg wrote a ringing dissent. Instead of concluding her opinion with the customary “I respectfully dissent,” Justice Ginsburg wrote “I dissent”—and the two-word phrase that became her trademark.

Sometimes Justice Ginsburg’s dissents became the basis for legislation overturning flawed decisions of the majority of the Court. In 2007, Ginsburg dissented in Ledbetter v. Goodyear Tire & Rubber Co., a pay discrimination suit brought under Title VII of the Civil Rights Act and the Equal Pay Act. The majority ruled that Lily Ledbetter did not file her claim in a timely manner, within 180 days of the discriminatory decision, and eliminated a long-standing “continuing violation doctrine,” which held that each subsequent paycheck based on the discriminatory pay decision continues the statute of limitations.

RBG dissented, noting that “a worker knows immediately if she is denied a promotion or transfer…compensation disparities, in contrast, are often hidden from sight.”

Justice Ginsburg also dissented in Shelby v. Holder (2013), where the Supreme Court struck down Section 4 of the Voting Rights Act is unconstitutional, a key provision that required states with a history of racial discrimination to get Justice Department pre-clearance before carrying out new voting laws. RBG famously said:

“Throwing out preclearance when it has worked and is continuing to work to stop discriminatory changes is like throwing away your umbrella in a rainstorm because you are not getting wet.”

Justice Ginsburg wrote powerful dissents in cases where the majority eroded women’s reproductive rights. In 2007, she dissented in Gonzalez v. Carhart, which upheld a Congressional ban a particular abortion procedure, without any exceptions for the life or health of the pregnant person.

In her concurrence, Ginsburg argued for a Ginsburg for a constitutional right to abortion based on concepts of personal autonomy and equal citizenship rather than the Court’s privacy approach first established in Roe v. Wade. Ginsburg said,

“Legal challenges to undue restrictions on abortion procedures do not seek to vindicate some generalized notion of privacy; rather, they center on a woman’s autonomy to determine her life’s course, and thus to enjoy equal citizenship stature.”

The loss of RBG is devastating. We will miss her brilliant, principled voice on a Court. 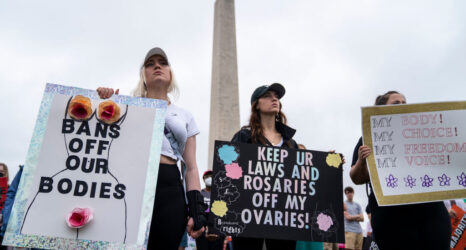