On Friday, the House passed the Pregnant Workers Fairness Act, a crucial piece of legislation designed to guarantee workplace protections for pregnant people. While the Pregnancy Discrimination Act of 1978 (PDA) provides some protections, pregnancy discrimination is still far too commonplace.

The Pregnant Workers Fairness Act (PWFA) would change that. Under the act, all public sector employers and private sector employers with more than 15 employees must make reasonable accommodations for pregnant workers, so that they can work safely throughout their pregnancy.

It draws inspiration from the Americans with Disabilities Act (ADA), guaranteeing that pregnant workers cannot be demoted, forced to take leave or otherwise retaliated against for requesting accommodations. It also balances employer’s interests by explaining that employers are not required to grant accommodations that impose an “undue hardship” on the business.

The passage of the PWFA in the House is an important step forward towards ensuring that all pregnant workers receive equal access and treatment in the workplace. And the bipartisan vote—315 to 101, with 99 Republicans joining the 216 Democrats—bodes well for the future of the bill. Now, the Senate must act quickly to pass this important legislation and protect pregnant workers.

The Senate must follow and pass this critical legislation to #ProtectPregnantWorkers. pic.twitter.com/01zi0piQke

In the wake of the House vote, many legislators emphasized the importance of the bill and called on the Senate to pass the legislation and send it to President Biden’s desk.

My bill, the Pregnant Workers Fairness Act, would deliver fairness and dignity to so many workers across America. By providing reasonable accommodations—a glass of water, a stool, an extended break—it’ll make a vast difference for pregnant workers.

Co-sponsor Rep. Lucy McBath (D-Ga.) added, “Like so many women in America, my story includes a struggle to get pregnant. Far too many expecting mothers are not provided necessary accommodations in the workplace to keep themselves healthy during pregnancy, and I am particularly proud that this bill helps protect pregnant women and their families from discrimination. No woman should ever have to choose between maintaining a healthy pregnancy and their paycheck.”

And Bobby Scott (D-Va.), chairman of the Committee on Education and Labor, explained:

“Current federal law does not clearly guarantee pregnant workers’ right to reasonable accommodations in the workplace—such as water, seating, bathroom breaks, and lifting restrictions. These basic protections are critical to protecting pregnant workers from the tragic consequences of unsafe working conditions, and they are particularly important today, as early evidence suggests that pregnancy leads to an elevated risk of severe illness from COVID-19. The Pregnant Workers Fairness Act is a bipartisan proposal that would finally establish clear, nationwide protections that guarantee pregnant workers the basic right to reasonable accommodations. This legislation has broad support across the political spectrum and across our communities—and is long overdue.”

Other co-sponsors weighed in as well, like Rep. Linda Teresa Sánchez (D-Calif.) and Rep. Lisa Blunt Rochester (D-Del.), who focused on the dangerous choice pregnant workers have had to face when trying to work without reasonable accommodations.

Across the country, pregnant workers are being fired, denied basic accommodations, or not being hired in the first place. That’s just wrong.

Today, I’m voting for the Pregnant Workers Fairness Act. Because no one should have to choose between job security & a healthy pregnancy. pic.twitter.com/TN08FRChk9

I’m proud to be a cosponsor of the Pregnant Workers Fairness Act and am so pleased it passed in the House. No one should have to choose between a healthy pregnancy and their income. It’s critical that we #ProtectPregnantWorkers and this bill brings us one step closer. https://t.co/tAsOADwvAB

It’s past time for a clear, nationwide protections for pregnant workers.

No one should have to choose between job security & a healthy pregnancy.#LongOverdue pic.twitter.com/RcMyo1IuA1

Congresswoman Carolyn Maloney (D-N.Y.), the first sitting New York City council member to give birth while in office, wrote, “I was proud today to vote for the Pregnant Workers Fairness Act and am urging the Senate to pass it swiftly. Pregnancy discrimination holds working parents back and threatens their financial stability, with women of color being disproportionately harmed by the current lack of workplace protections. It’s long past time we ensure that every worker is entitled to reasonable accommodations to support a healthy pregnancy.”

And Rep. Hakeem Jeffries (D-N.Y.) pointed out the progress Democratic lawmakers have made in passing legislation designed to support Americans.

Can’t make this stuff up.

“No One Should Have to Choose Between a Healthy Pregnancy and Their Job”: Feminists React

Feminists and reproductive justice advocates are also praising the passage of this bill, pointing out that it will prevent gendered and pregnancy-based discrimination, and ensure all pregnant workers have access to equal rights at work.

Dina Bakst, co-founder and co-president of A Better Balance, said in a statement:

“This represents a resounding victory for the pregnant workers who have been treated like second class citizens under the law for far too long, especially low-income workers and mothers of color. At A Better Balance, we have heard from thousands of expecting mothers over the years who have been denied accommodations and forced off the job, suffering devastating economic consequences as a result. For nearly a decade, we have been leading the charge to combat this horrific mistreatment, alongside so many brave women who have spoken out, to pass this urgently needed legislation. As we emerge from a global pandemic that has forced millions of women out of work, the Senate must listen to pregnant workers and act swiftly to pass the Pregnant Workers Fairness Act and send it to the President’s desk. It’s long overdue.”

Now it’s time for the Senate to take action.

Alexis McGill Johnson, president and CEO of Planned Parenthood Federation of America and the Planned Parenthood Action Fund, wrote on Twitter, “So glad to see the House pass this critical legislation with broad bipartisan support—there’s no excuse for continuing to ignore the needs of pregnant workers and deepening gender, racial, and economic disparities. The Senate must pass this legislation without delay!”

In a press release from the coalition of organizations reponsible for advocating for the PRFA, Angela Aina, the executive director of Black Mamas Matter Alliance, emphasized the importance of the PWFA for Black parents:

“Black Mamas Matter Alliance is proud to support policies that affect positive change for pregnant workers and employers. Some states have taken action to ensure workplace accommodations for pregnant and breastfeeding workers. Black pregnant workers will beenfit from policies that set and implement national standards to ensure pregnancy fairness in the workplace. The Pregnant Workers Fairness Act has the capability to ensure Black parenting people can prioritize the health of themselves and their children, without risk of losing their employment.

And Kristin Rowe-Finkbeiner, executive director and CEO of MomsRising, reiterated the urgency of this legislating during the COVID-19 pandemic:

“Bipartisan passage of the Pregnant Workers Fairness Act in the U.S. House of Representatives is an important step in making our workplaces more fair and putting policies in place that will enable women and moms to succeed in the workforce, following a devastating year when so many women, and especially moms of color, were pushed out. We need to build a care infrastructure, which includes ending the days when people are forced to choose between their paycheck and a healthy pregnancy. This must be the year the U.S. Senate passes the Pregnant Workers Fairness Act as well, so President Biden can sign it into law.”

“Today’s vote brings working people one step closer to no longer being forced to choose between a paycheck and a healthy pregnancy. The Pregnant Workers Fairness Act protects pregnant workers who simply want to do their jobs but are prevented when employers refuse to make even minor temporary changes to accommodate their medical needs. If the pandemic has taught us anything, it is that women are central to our economy—and as many pregnant workers on the frontlines keep our country going every day, we must provide them the basic accommodations they need to stay healthy. Now, it’s the Senate’s turn to swiftly vote for this commonsense bill.”

Using #ProtectPregnantWorkers, feminists are celebrating the bill as a step towards full equity for pregnant workers.

For far too long, pregnant workers have been horrifically mistreated, discriminated against, and pushed from the workforce. Now we urge the Senate to pass the PWFA so we can #protectpregnantworkers once and for all. pic.twitter.com/QY9A3bo3cy

One of my first bills at #nvleg was working with @NARALNV and @PPVotesNevada to pass the Nevada Pregnant Workers Fairness Act in 2017. I’m glad to see this legislation advancing at the federal level! https://t.co/EueWxh7PfW

The House listened to the voices of pregnant workers who have been forced to jeopardize their health on the job, or sacrifice their income. Now the Senate must act swiftly & pass the Pregnant Workers Fairness Act. #ProtectPregnantWorkers pic.twitter.com/5sK9XhQ3fF

Now, feminist organizations like NARAL and the National Women’s Law Center are calling for the Senate to quickly take action and pass the bill.

Pregnant workers have been mistreated and forced off the job for far too long. Now, it’s up to the Senate to stop this injustice and #ProtectPregnantWorkers.

If we’re going to #BuildBackBetter, then we need to ensure workplaces free from pregnancy discrimination so that pregnant people can stay healthy and earning their income when they need it most. The House just passed the Pregnant Workers Fairness Act—now onto the Senate.

No one should have to choose between a healthy pregnancy and their job.

We call on the Senate to immediately take up and pass this common-sense bill providing pregnant workers the protection they need and deserve.

🎉 GOOD NEWS: The Pregnant Workers Fairness Act just passed the House! This is an important win — now it’s time to #protectpregnantworkers in the Senate, and pass PWFA once and for all. pic.twitter.com/XKVq3DZwCG

The PWFA is an essential step on the path towards full equality for women, parents and all pregnant people. It prevents pregnant people from being discriminated or retaliated against for simply requiring temporary reasonable accommodations during pregnancy. And it demonstrates a necessary commitment to upholding the rights of pregnant people and children. The House has proven that they respect and value pregnant people and will work to ensure their safety. Now, the Senate must follow their lead and vote to send the Pregnant Workers Fairness Act to President Biden’s desk.

Katie Fleischer is a senior at Smith College, majoring in the study of women & gender, and a Ms. editorial assistant.

To Build Back Better with Women, Invest in Child Care 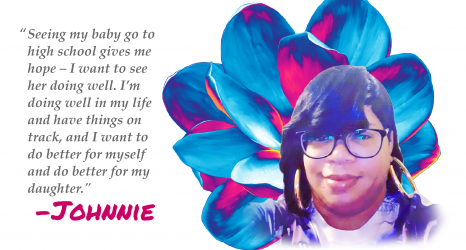 Front and Center: “I Had To Quit My Job To Help My Baby,” Says Johnnie, Essential Worker and Guaranteed Income Recipient