The autism and disability community has endured a long history of being excluded and ignored by Hollywood—even in the telling and making of their own stories.

While many praise Hollywood for its “progressive” depictions of Black and LGBTQ characters, one group still continues to face a lack of true and respectful representation from the mainstream media: disabled people, especially autistic people.

“It’s sad how [Hollywood is] so progressive, they’ve really moved forward when it comes to representation,” Catherine Burford, an autistic writer, told Ms. “But not with the disabled community. They’re still like in the past with how they portray it. They still like to rely on those who are not disabled [to portray disabled characters].”

This sentiment has been shared by many in the disabled community. In a 2016 interview with The Washington Post, Jay Ruderman, president of the Ruderman Family Foundation, called the lack of true disability representation “a civil rights issue that Hollywood is ignoring.”

“We’ve progressed with other minority groups,” Ruderman said. “With disability, the representation is still woefully inadequate, and we think that’s based on a stigma that’s prevalent in society and also in Hollywood.”

For many in the autism community, the way Hollywood chooses to present them is counterproductive and often defines them by their disability. “You don’t see them as a person; you see them as their disability,” said Tim Boykin, an autistic singer, actor and writer.

Similarly, Robin Roscigno, an autistic educator, educational researcher and founder of AuTeach, lamented how many disabled characters are in some way defined by their disability, without any autonomy.

The Art of ‘Cripping Up’

When making films and TV shows about disability, Hollywood often excludes disabled people from the production. Many times disabled characters—such as Dr. Sean Murphy in The Good Doctor and Augie in Wonder —are played by able-bodied, neurotypical actors. Many disabled people call this tactic “cripping up.”

“It just irritates me because it’s just like, if you watch [a] movie, knowing that this is a neurotypical person who is not disabled playing a disabled person, I don’t understand why it doesn’t make you, make a person uncomfortable. Because in any other stance, if you pretend to be a disabled person, for money, people will just like they’ll rip you apart. They’ll be like, ‘that’s so offensive’, ‘that’s so horrendous.’ But the second you put a camera in front of them, it’s okay.”

According to Young in a 2014 TedTalk, many people have only “experienced disabled people as objects of inspiration. … For lots of us, disabled people are not our teachers or our doctors or our manicurists. We’re not real people. We are there to inspire.”

According to Kristen Ginger, director of the National Center on Disability and Journalism (NCDJ), “It’s well-intentioned, but those stories also can be very exploitative and they are very limited in really getting to the heart of how people live and what they think and how they’re affected by what’s going on in our civic life.”

The Four Types of “Cripples”

“These stories center on disabled people accomplishing basic tasks or ‘overcoming’ their disability,” said Romanska. “In the inspirational narratives, disability is not a fact of life—a difference—but something one has to overcome to gain rightful sense of belonging in society.”

“The existence of someone should not be considered ‘inspirational,’ just because they’re different.” said Ariel Henley, a writer born with Crouzon syndrome. In an op-ed published by Teen Vogue, Henley expressed distain over the depiction of a character with facial deformities in the film Wonder:

“In Wonder, Auggie is used as a prop to teach those around him about acceptance and compassion. The official movie description deems him ‘the most unlikely of heroes.’ But what is he a hero for, exactly? For living with a disfigured face? For not getting angry when he’s subjected to cruel and intense bullying on a daily basis? For going through traumatic medical procedures? You may find someone inspiring for how they handle a certain situation, or the humor they use to cope with adversity, for example.

“The mere existence of individuals with facial disfigurements or differences is not inspirational. We are so much more than the props we’ve been turned into, designed to make non-disfigured individuals feel better about their lives. Our stories matter and our experiences matter, and to portray our lives and struggles as nothing more than a source of inspiration encouraging those without craniofacial disorders to feel better about themselves, is a great disservice to everyone in the cranio community.”

Romanska describes the “redemptive cripple” as an offshoot of the “inspirational cripple”—in which the disabled character dies, sometimes by suicide or murder. “Disabled characters are sacrificed to prove their worth or to help the protagonist reach his goal,” said Romanska.

Roscigno calls this trope “kind of a hybrid of a couple of different models: one where the person themselves are redeemed, or [the other] where they redeem others”:

“There’s two versions of [the redemptive cripple]. There’s one where people view disability as some sort of moral failing. Like, ‘you are disabled, you didn’t try enough.’ And so you know, people will ‘overcome their disability.’ And then there’s another version where the child or you know, person’s disability becomes a redemptive arc for their caretaker.”

The “magical cripple” trope is essentially the disability version of the popular (and racist) “magical Negro” cliche. Just as a “magical Negro” character exists only to serve the white protagonist—think Uncle Remus in Song of the South—with wisdom and lessons that help them develop and grow, a “magical cripple” character is used as “a plot device … to guide the lead character toward moral, intellectual or emotional enlightenment,” said Romanska.

“Magical cripples transcend the limitations of the human body and are almost divinelike,” she continued. “They make magical things happen for able-bodied characters. … The magical cripple doesn’t learn anything and doesn’t grow because he already is enlightened.”

According to Roscigno, the “magical cripple” character doesn’t have any agency and does not receive a full narrative portrayal from the screenwriters or even anyone watching it: “It becomes more about disabled stories existing only to serve non-disabled audiences.”

Lastly, the “evil cripple” archetype is one of the less-talked about disability archetypes. Rooted in Greek mythology “populated by half-man half-beasts who possess pathological and sadistic cravings,” the “evil cripple” according to Romanska, “represents a form of karmic punishment for the character’s wickedness.”

A modern example of this trope is presented in the horror film Us, in which Academy Award winning actress Lupita Nyong’o uses what she said was “inspired by” spasmodic dysphonia, a voice disorder that causes involuntary spasms to the vocal chords, to create a “creepy voice” for her character Adelaide’s evil double Red (also played by Nyong’o).

Many autistic people say this archetype is less seen in depictions of autistic characters. Others, like Roscigno, have a different interpretation of the trope.

“It’s like the whole, like, ‘trapped inside my mind’ narrative with autism. People kind of tend to perpetuate that autism is somehow like in closing or, you know, shielding like your real child that is somehow underneath all of that,” said Roscigno.

Because of the constant inaccuracy in these portrayals of disability, as well as a lack of media that includes accurate representation, the general public’s image of disability becomes distorted to the reality and nuances of what disability looks like.

“To other autistic people, I certainly look and act autistic,” autistic artist and audio describer Meg told Junkee.”To anyone without knowledge in the area, I may appear ‘just a little weird’. Their image of autism was informed by inaccurate media.”

“This may seem harsh, but as a disabled woman that’s what I see: disabled people used as puppets for onlookers to ogle. Of course, disabled people can inspire and are badass human beings, that’s not up for discussion. Nevertheless, I’ll always challenge the sentiment behind the word ‘inspirational’.”

While many filmmakers and actors can have, or at least claim, good intentions in the way they depict disability, many disabled people face the societal repercussions of such on-screen portrayals of who they are.

“Basically, we are just there for like, inspiration,” Boykin said. “Neurotypicals like to speak over us. They do it out of good faith when in fact they are overshadowing us. They believe it’s their ‘woke points’ that make it all better.”

The effects of how the misrepresentation of disabilities, particularly autism, go far beyond those who consume it. According to one study, “media representations of talent and special abilities can be said to have contributed to a harmful divergence between the general image of autism and the clinical reality of the autistic condition.”

Some may argue against any real-life consequences many depictions of disability can have, but many actual disabled people say those consequences are real and affect everyone. “It narrows people’s perceptions of what autism can look like,” says Lasley.

He references a joke he made in one of his stand-up acts:

“The joke is basically saying, you know, it’s called a spectrum for a reason. We don’t all act one way. You know, just because you saw one movie about someone with autism doesn’t mean everyone who’s autistic acts like that. We’re not all Rain Man. Just like everyone who’s a mall security guard isn’t a fat doofus who’s funny in small doses, but not really enough to carry a whole movie.”

Luckily, there are ways that Hollywood and society can improve, as many in the disability community have stated.

“With only two Oscar winners openly having a disability in the entire 93 years of the awards, it is even more important to give disabled artists the platform they deserve,” said Renke. “Not only is seeing authentic representation empowering and makes me feel like I belong, it also … ‘normalizes’ disability. It shares our world with others. We live in a different time and we live in a time where autistic actors are on the come-up.”

“To me, my big request and sort of note for, you know, people wanting to make movies about disabled people … give them more traits than just disabled. Make them, you know, three-dimensional people, as well as being disabled,” said Lasley.

Boykin also suggests filmmakers “talk to autistic people. Learn about autism. Hire autistic actors or writers. It also creates a good story. … Show stimming”—self-sensory regulating behaviors and mechanisms—”as not the end of the world. And actually, like show an autistic person as a person. Not just a plot device. We have a lot of talent, so please give us a chance.”

Sarah Rosenberg is an intern at Ms.. She is an autistic nonbinary lesbian. She prefers to go by she/they pronouns. She graduated from Los Angeles Pierce College in June 2020. She holds an associate of arts for transfer degree in journalism and two associates of arts degrees for arts and humanities, and social and behavioral science, respectively. She has previously worked at Pierce College's Bull Magazine and Roundup Newspaper. 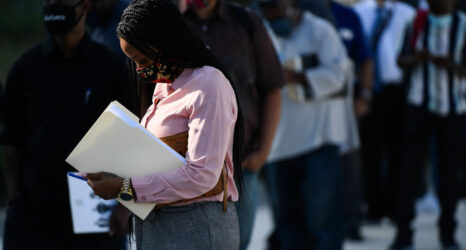 Our Democracy Has Problems. Women Have Solutions.