“We need to tell students the full history. If we don’t, history repeats itself.”

This May, Texas state Rep. Briscoe Cain (R) authored and introduced legislation with the stated purpose to “preserve the purity of the ballot box.” During floor discussion of the bill, state Rep. Rafael Anchía (D) asked Cain, “What was your motivation for using that term ‘purity at the ballot box’? Did you look at the history before using that word?”

Cain responded that he did not.

“Well, you may have missed it then,” said Anchía. “And this would have been very obvious, I think, to anybody who looked at that language. That provision was drafted specifically to disenfranchise Black people—Black voters in fact—following the Civil War. Did you know that?”

Anchía then explained to Cain the history of the phrase ‘purity at the ballot box.’ The phase was used in Texas to establish all-white primaries and during the Jim Crow era to prevent Black people from voting, and the language was used to establish penal disenfranchisement schemes as far back as 1845.

Cain claimed he didn’t know that history. And maybe he didn’t.

But now, Republican lawmakers in Texas are trying to ensure that all Texans don’t learn this history as well. A new bill, Senate Bill 3, just passed the Senate, removing requirements that public schools teach about the history of slavery and white male domination in America.

These efforts began in June when the Texas legislature adopted House Bill 3979, prohibiting public schools from teaching the New York Times’ 1619 Project—a series by Nikole Hannah-Jones about the ongoing impact of slavery and racism on American society. But the law had a further impact.

HB 3797, which applies to social studies courses, prohibits teachers from discussing issues that might make students “feel discomfort, guilt, anguish, or any other form of psychological distress on account of the individual’s race or sex.” The law also prohibits social studies teachers from requiring students “to discuss a particular current event or widely debated and currently controversial issue of public policy or social affairs”—such as the murder of George Floyd and the ensuing protests of police brutality.

However, during the legislative process, Democrats managed to amend HB 3979 to require teaching a more inclusive history.

“The original bill contained this list of documents that had to be included in the social studies curriculum, things like the writings of Alex de Tocqueville, the Federalist Papers, and certain portions of the Constitution. So we offered amendments to add to that list,” said state Representative Erin Zwiener (D).

Democrats offered amendments to require coverage of the history of white supremacy as well as the history of oppression against women, Chicanos, Native Americans, workers and immigrants. They amended the bill to require coverage of important historical figures who fought for social justice as well as related documents and speeches. Republicans tried to block these amendments, but clever procedural maneuvering allowed Democrats to keep the amendments in the bill, which is now law.

In response, Texas Republicans are back trying to eliminate these new requirements and expand HB 3979’s restrictions to the entire curriculum, not just social studies classes. In July, during the state’s special legislative session, Senate Republicans passed SB 3, removing the Democratic amendments to HB 3979.

If SB 3 becomes law, schools would no longer be required to teach about the history of white supremacy, the institution of slavery, the Fugitive Slave Acts of 1793 and 1850, the Indian Removal Act, the eugenics movement, the Ku Klux Klan and “the ways in which it is morally wrong.”

Students would no longer be required to know about the Emancipation Proclamation, Universal Declaration of Human Rights, the 13th, 14th and 15th Amendments to the U.S. Constitution, and Brown v. Board of Education.

The proposed law would eliminate the requirement that students read Martin Luther King’s “Letter from a Birmingham Jail” and his 1963 “I Have a Dream” speech.

This Republican bill would erase important history from the minds of Texans.

“We need to tell students the full history. If we don’t, history repeats itself,” said Zwiener, who has worked as an educator. “We don’t need to be scared of telling the full truth. We should be confident that we can tell that story and hold that complexity, instead of needing to deliver a sanitized narrative and pretend that our country and our state are faultless. It’s about knowing our full story, and knowing the progress that has been made so that we can protect it … Fragility really gets in the way of our ability to have full conversations.”

“We don’t need to be scared of telling the full truth. We should be confident that we can tell that story and hold that complexity, instead of needing to deliver a sanitized narrative and pretend that our country and our state are faultless.”

Zwiener describes SB 3 as “an effective book ban” that will block teachers from assigning books like Huck Finn, To Kill a Mockingbird, Raisin in the Sun or Handmaid’s Tale. She is concerned that the law would discourage English teachers from teaching writing that touches on race and sex, or racism and sexism.

“I was flipping through reading lists with some friends. And you know, it’s about a quarter of the boks that are potentially affected by this,” said Zwiener. “It’s really almost every book by people of color and most of the books by women published in the 20th century or later.”

Zwiener is also concerned about banning teachers from assigning material that might make students feel uncomfortable, which was part of HB 3979 and is expanded to all classes by SB 3.

“It’s never going to be comfortable to learn what your ancestors did. To use a specific example, what’s been done in the name of protecting white women,” said Zwiener, referring to lynching. “It should be uncomfortable to learn about people doing evil things. Moving through that discomfort is how we build a better society. Nobody is trying to go make every student in a class feel bad about themselves. We’re just trying to tell the truth of our history. And trying in English classes to allow the teaching of the full range of human experience so that we can have a society that is inclusive of everyone. That’s one of the main purposes of our public education system is to teach American values. We can’t teach American, small ‘d’ democratic values if we are intentionally excluding part of the truth.”

“It should be uncomfortable to learn about people doing evil things. Moving through that discomfort is how we build a better society. Nobody is trying to go make every student in a class feel bad about themselves. We’re just trying to tell the truth of our history.”

Zwiener criticized another provision in SB 3 prohibiting students from participating in any “internship, practicum, or similar activity involving social policy advocacy or public policy advocacy.” Zwiener explained how valuable her own community engagement experiences were to her when she was a student.

“I had the assignment in elementary school where I wrote my legislators and I’m pretty sure I wrote them about how they need to protect the environment, because I was a little animal nerd. I actually remember getting credit in school for speaking out about a no-kill proposal for a local animal shelter… I would love our seniors in high school to have the opportunity to go have an internship in the advocacy world. Participating in civics is a really important skill. I applaud our educators who incorporate that into the curriculum. Why are we wholesale banning it in this bill? I actually carried an amendment to put a restriction there to say, this can happen as long as no particular point of view is required. And it was voted down on party lines. Wow.”

“We’re seeing the last gasp of white supremacy fighting back … Some of these folks don’t understand that asking what we teach in history class to be centered around what makes white men uncomfortable is an act of white supremacy. Full stop.”

SB 3 has passed the Texas Senate, but further progress on the bill is unlikely because of the Democratic walkout last Monday, when over 50 Texas Democratic legislators left the state en masse to prevent a quorum in the House and freeze voter suppression bills from advancing through the chambers. But Zwiener says Texas Republicans will likely revive the bill in future sessions.

This bill is part of a widespread Republican campaign against “critical race theory.” Zwiener contested their use of that term and explained what’s really at stake.

“It’s important that we learn that slavery was the main driver of the Civil War,” Zwiener continued. “And I’m actually going to flashback to my own memories of my Texas public school education. I did learn that slavery was a major component of the Texas War of Independence. But I learned that the Civil War was entirely about states’ rights. And I sat in a classroom where I got to decide which side I was going to be on. And I and a significant other number of my classmates chose the Confederacy because of the states’ rights narrative. Yeah, I mean, that’s wrong, we should not be putting our children in those circumstances. We need to tell them the full history.”

Zwiener explained why Rep. Briscoe Cain did not know the history of the language of “purity at the ballot” in the Texas Constitution.

“Representative Cain is about the same age as I am. We went through the same Texas public school system where the truth of the civil rights movement and the civil war were obscured. I was brought up in Texas to believe that we’d fixed racism, which is obviously not where we are today. But I think that’s an answer that makes people feel a lot more comfortable.

“A fair number of the Republicans want us to stay in that place of ignorance. There’s this fallacy that if everyone is ignorant of racism and sexism, it will all just evaporate, which is just not how this works. Pretending they’re not there makes us more vulnerable to their sting. Legislators need our own history lesson.”

Editor’s note: Republican lawmakers in Texas passing extreme voter suppression legislation, banning critical race theory and outlawing abortion outright. … House Democrats fleeing the state en masse. … Governor Greg Abbott threatening to arrest legislators. … What the heck is happening in Texas?! If you haven’t been following along closely, don’t worry—we’ve got you covered the latest episode of “On the Issues With Michele Goodwin,” 15 Minutes of Feminism. (Okay, 17 minutes!) Listen below:

… Or head to the episode landing page for a full transcript, background reading and more: 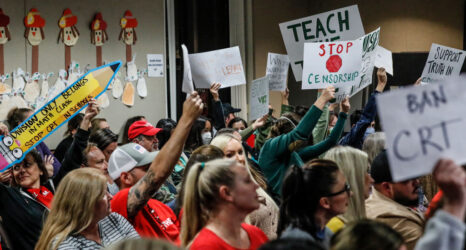