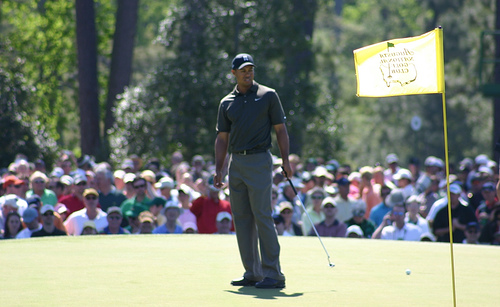 I don’t really care about Tiger Woods and his sex scandals. Okay, salacious celebrity gossip is fun, but I’m not here to comment on his behavior at all. I’m only here to address the question, “Who cares if a golf club has an all-male policy?”

Let’s add, “Who cares if such a club is all white?” Most of us are pretty clear that racial segregation is wrong. Gender segregation would be equally wrong, right?

Yes, and here’s why: Exclusive private clubs like Augusta National, which hosts the 2010 Masters Tournament and where Tiger will be making his “comeback” this weekend, are designed for people with advantages to share those advantages selectively with each other and their children. These clubs, located in every state, hand-pick who they will allow to join based on subjective social criteria. In fact, they claim that their social nature makes them exempt from any charges of discrimination.

But discrimination is exactly what’s going on at these exclusive private clubs: By hand-picking their membership, they create a homogeneous environment where the rich tend to get richer and the privileged more privileged. Their exclusivity sharpens lines between insiders and outsiders, emphasizing the distinctiveness and superiority of those on the inside. Symbolic boundaries like these feed and legitimate all class, race and gender inequalities.

Sociologists like myself talk about social capital, one’s network of connections, and cultural capital, one’s personal style. A man (and only a man) can get into Augusta if he has the right social capital and cultural capital (you have to know the right people and know how to behave.) If he does get in, the club will nurture his stock of both capitals: He’ll get to rub elbows with other important and powerful men, and the club’s social life can help develop his knowledge of golf, wine and so on. When members bring their sons along, they are preparing the next generation to take their lofty place in society.

We all know that social capital is helpful in careers. Every guide to job hunting advises readers to “work their connections.” Belonging to exclusive clubs like Augusta helps young people get a good first job and helps members of any age find better jobs and have more success.

There’s another important consequence of exclusive private clubs: When members bring their children along, it’s partly to serve up to them a pool of appropriate (read homogenous) romantic partners. Upper-class women have traditionally, through dances and other invitation-only activities, nurtured the white upper-class in this way.

Most important of all is that exclusive clubs like Augusta are breeding grounds for a toxic mentality. Sociologist Diana Kendall points out in her book Members Only: Elite Clubs and the Process of Exclusion:

Being apart from outsiders makes it possible for elites to feel superior to non-elites and to ignore the needs and concerns of those who are not within their own inner circle of social, economic and political elites.

The “elite think” that can grow in these environments is harmful to people in the U.S. and internationally. Having studied exclusive clubs in George W. Bush territory, Kendall illustrates “elite think” by quoting Bush as saying:

People have access to health care in America. After all, you just go to an emergency room.

Harmful mentality in a nutshell.

I am not arguing that women, and/or people of color, should be given the privilege of joining these clubs. Admitting a few token “others” would miss the point. The point is that what happens behind those elegant doors belies America’s goal of being an equal-opportunity meritocracy. What breeds at places like Augusta benefits a few and is harmful to many.

This isn’t a frivolous issue: Clubs like Augusta help to perpetuate inequalities of class, race, and gender. Sons learn harmful lessons from fathers in these environments. Don’t give them a “boys will be boys” pass–it’s little different than “whites will be whites.”