Is the Whitest White Girl the Best B-Girl? - Ms. Magazine
Skip to content 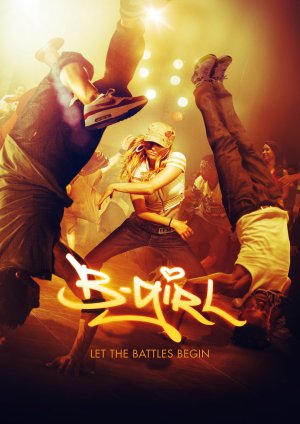 B-Girl, a new hip-hop film about break dancing, premiers on Showtime this Sunday. In it, protagonist Angel survives a vicious domestic violence attack and overcomes her physical and psychological obstacles to become the best b-girl on the block.

Filmmakers, Elizabeth (producer) and Emily Dell (writer and director) are admittedly not b-girls, but their experience as women in the movie industry parallel Angel’s quest to break down the barriers within predominantly male spaces.

I love the two triumphant narratives of female empowerment: Angel’s fictional one and the Dells’ real life one. But very few things raise my eyebrows more than another hip-hop movie centered around a blond white woman, with black and brown people as supporting cast.  Since people of color originated breaking and are rarely featured as the stars in dance movies, their decentralization feels disrespectful.

Jules Urich, the white actress who plays Angel, is a preeminent dancer, and the Dells describe her as simply the best. But could her presence also be an example of colorblind casting?  This problematic trend occurs when white actors receive lead roles that contradict a film’s cultural context. I interviewed the Dells to find out.

Ebony Utley/Ms.: Tell me about your casting call and the outreach that you did to find the best actress to play Angel.

Elizabeth Dell: When it came to the feature there really wasn’t a casting for our b-girl. After we met Lady Jules, she became part of the family of this movie and it was just incredibly natural and organic. She was always going to be a star. She’s just one of the biggest, best-known and most impressive b-girls in the world.

Ms.: I noticed that there weren’t any other featured women dancers in the film.

Emily Dell: I chose to isolate Angel a bit more. There are a lot of really amazing b-girls who are coming up in the ranks in a lot of different ways. The younger generation is thriving and that’s very exciting and we’re wholehearted supporters, but as far as this story was going I wanted to make sure it was a clear story.

Ms.: It turns out that Angel is biologically Latina via her mother’s mother, but she’s not quite culturally Latina. If her grandmother hadn’t been a character in the film, we would never know that Angel is Latina. Why did you make some of the choices that you made about ethnicity in the film?

Emily: I actually wanted to have her as a mixed-race individual because I felt like that reflects the modern face of hip hop.

Elizabeth: We were very careful in trying to choose a really wide range of faces in the movie and to reflect how hip hop is always being reorganized, interchanged and reconfigured.

Emily: She does. She grew up in Colorado as the whitest little white girl in her town.

Ms.: Can you imagine someone who just sees a white girl breaking in the promotional materials saying,  “This looks like another example of white people taking over hip hop again?”

Emily: We actually get that a lot. I am totally unthreatened by that comment. I almost want to giggle and say wow, okay. What you don’t realize is that the girl breaking … is the most accomplished, the most bad-ass b-girl in the world.

Ms.: As an “angel,” your main character is, essentially, the visibly apparent white woman savior of the darker spaces, particularly the men of color in her troupe. Is that problematic?

Emily: I can’t say I’ve ever thought about it that way. I took her name because it was Angela and shortened it to Angel. If I talked about it as a savior, I would think about it more as a self-savior. But again, as far as the guys in the troupe go, we didn’t make choices about them being darker or lighter or anything. We honestly hired the best guys in L.A.

Elizabeth: I never really thought of it as a white angel saving anyone. I thought of her being her own angel. As a b-girl, she flies. She is an angel on the floor.  She moves like someone with wings.

Above: Trailer from B-Girl. Movie poster courtesy of B-Girl.