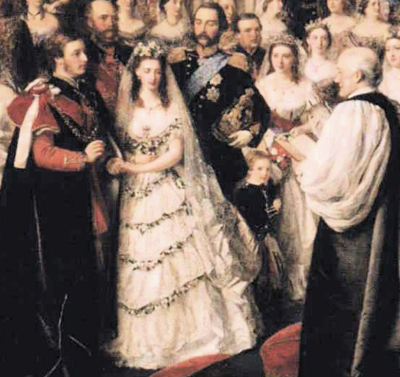 Proposition 8 may have been struck down for now, but the nationwide fight for gay marriage will undoubtedly continue for years. Though any competition for “Most Baseless Excuse To Oppose Same-Gender Marriage” is a photo-finish, “I’m opposed because I support ‘traditional marriage’ between a man and a woman” wins by a nose. The only possible explanation for any nostalgia for “traditional marriage” is that no living American is nearly old enough to remember a time when their state endorsed and enforced truly “traditional” marriage laws, to the extreme detriment of women.

Arguably the most influential definition of “traditional” marriage came from William Blackstone, a well-thumbed copy of whose “Commentaries on the Laws of England” could be found on the desk of every Colonial or Early American lawmaker, judge and attorney:

By marriage, the husband and wife are one person in law; that is, the very being or legal existence of the woman is suspended during the marriage, or at least incorporated and consolidated into that of the husband, under whose wing, protection and cover, she performs everything.

The two became one–that one being the husband–while the bride underwent “civil death” to become his legally invisible appendage. Virtually every asset of hers–personal possessions, every penny of wages earned, the very clothing on her back, and even her children–was placed under the absolute control of her husband, though inherited real estate was restricted in that husbands could use it for their own benefit, but not arbitrarily dispose of it without her free consent, as it was meant to provide for her during widowhood then be passed on to her children. Like a child, she could not sign a contract, make a will, buy or sell a business, or sue in court (except for divorce–where legal–or for failure of her husband to adequately support her.)

However much the institution may have changed since, the pattern of change never varies. Every reform is viewed as an “attack” on marriage, boding dire consequences for society in general and sounding the death knell of the institution itself.

This pattern first emerged when proto-feminist Ernestine Rose launched a campaign in 1836 to grant New York state wives a few modest property rights. When her proposal finally got a hearing before a legislative committee in 1844, it was rejected because such a change would lead to “infidelity in the marriage bed, a high rate of divorce, and increased female criminality.” But her persistent battle for equality resulted in the passage of New York’s landmark Married Women’s Property Act of 1848, a model other states would later follow.

From Ernestine Rose onwards, changes to marriage have preserved and strengthened it. Spousal abuse, nowhere socially approved–even outlawed by early Puritans–used to be far too often considered by the law a “private vice” not suitable for “vexatious prosecutions” or what several state courts recognized as a husband’s “right” as “head of the family” to use “moderate” (non-permanent injury) force to “chastise” a wife. Today it’s recognized as a crime, with zero-tolerance, gender-neutral enforcement in many–though not enough–communities.

Rape laws no longer universally exempt husbands, though it took until 1976 for the first state to repeal such an overtly misogynist remnant of male “ownership” of a wife, and not until 1993 did the last total exemption die. (Even today spousal rape is treated as a lesser or separate crime than other types in some states.) Homemakers are no longer legally considered child-like dependents, but full partners entitled to equally share and control the marital assets created by the partners’ mutual endeavors.

Laws banning interracial marriage, once found in 41 states–and still on the books of 16 in 1967–are now just historical embarrassments thanks to an “activist” 1967 Supreme Court that overturned them, also overruling the 72 percent of the public who still supported those laws at that time. (Not to mention the 48 percent plurality who still believed such unions should be a criminal offense.)

Divorces may be more numerous than we’d like, but few would prefer a return to “traditional” pre-Revolution times when “until death do us part” was a legal mandate almost everywhere except New England. Though more available after independence, divorce was still extremely hard to get in many states, even for those trapped in the most atrocious marriages. “Progressive” New York required proof of adultery as the sole ground for divorce from 1787 to 1967, and for many years after legalization in Virginia and Maryland, each divorce required a special act of the Legislature. By the mid-1850s, 19 of 31 states permitted divorce for “cruelty” but judges generally granted them only to wives they found to have been “submissive, chaste, and protective of the children” during the marriage, while South Carolina allowed no grounds at all until 1949. There seems to be little enthusiasm today for actually repealing 1970s “no fault” laws and returning to the days of mandating blame-fixing, spleen-venting, punitive, adversarial proceedings which were almost as intimidating as an outright divorce ban.

Every generation’s changes have been fought tooth and nail by “traditionalists,” only to have those reforms be incorporated into the next generation’s definition of “traditional” marriage. Now, ironically, the once-radical idea of “equal marriage” between husbands and wives is considered “traditional” because that’s what many assume was always the case. But it was a feminist idea about equality between women and men slowly becoming a mainstream “American” idea that forced this substantial redefinition of marriage.

Increasingly successful challenges to heterosexism and homophobia must and will redefine marriage as well. This most adaptable of institutions will continue to thrive. Its inflexible, unjust siblings–monarchy and slavery–long ago met their doom in the U.S. because they lacked any ability to change to meet evolving American principles of equal rights, opportunities and, most importantly, equal respect and dignity for all.

ABOVE: Detail from William Powell Frith’s The Marriage of the Prince of Wales, 10 March 1863. Image public domain.