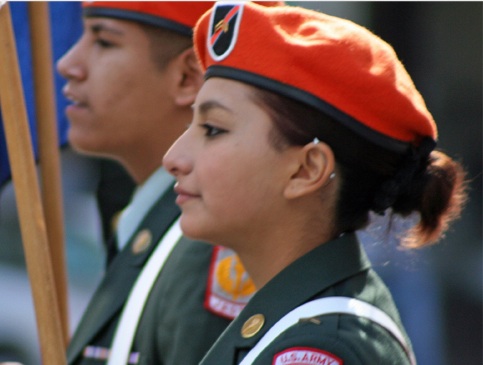 Today, Veteran’s Day, we Americans will pause for moments of silence, listen to bells tolling and guns firing and remember the deaths of thousands of our troops in Iraq and Afghanistan (let alone wars of the more distant past). It’s a day of meditation and sadness–but it must also be a day for feminism and activism.

For too many women veterans, homecoming represents a whole new battlefield–one strewn with warriors suffering from homelessness, mental disorders and a still-rankling sexism.

Sometimes the sexism is as simple as a lack of tampons in the bathrooms at the VA hospitals–a small yet definitive reminder that women remain on the fringes of the care the Veterans Affairs department provides. Other times it takes the form of a discriminating policy for diagnosing post-traumatic stress disorder (PTSD), a scarcity of VA homeless shelters that offer separate housing for women, and the  devastating rate of sexual assault within military ranks.

Women now constitute 11 percent of the total armed forces; more than 200,000 women service members have served in either Iraq or Afghanistan. And many of them have been coming home: Since President Obama took office, more than 100,000 troops have returned from Iraq, with 50,000 more scheduled to return before the end of 2011. Our attention to them must not stop when they leave battle.

For one thing, new research suggests that women troops develop PTSD and depression at a higher rate than their men counterparts. That research may be difficult for some in the military to swallow, considering that the Army’s Mental Health Advisory Team recently concluded, “Female soldiers are no more vulnerable than male soldiers in how combat can affect their mental health and well-being.” But women troops too-often face an enemy within their ranks: Up to one-third of all women in the military are raped or sexually assaulted by their fellow soldiers, a pervasive form of violence that increases PTSD. Even the VA admits that military sexual trauma leads to a 59 percent higher risk for mental health problems.

Yet, despite the increased and unique risks women veterans face, the VA as well as the country at large is not keeping pace with the challenge of providing adequate care. According to a 2009 report from the Iraq and Afghanistan Veterans of America, only 14 percent of VA hospitals offer “specialized, comprehensive women’s health clinics,” while 16 percent of VA hospitals have no specialized women’s health clinic on-site.

Moreover, it’s more difficult for women to substantiate claims of PTSD, especially since they are officially serving only in combat “support” roles. Colleen Corliss, spokesperson for Swords to Plowshares, which helps veterans transition back to their communities, told ABC News,

A male goes to fill out a claim to get treatment and he has 23 to 28 pages to fill out. For women there are additional steps, ridiculous red tape for someone who is having severe symptoms focusing.

Yet, Catherine Traywick notes, the distinction between combat and support roles has evaporated in this war. As Admiral Mike Mullen, chairman of the Joint Chiefs of Staff, said last week:

In a war where there is no longer a clear delineation between the front lines … and the sidelines … where the war can grab you anywhere, this will be the first generation of veterans where large segments of women returning will have been exposed to some form of combat.

If discrimination within the VA weren’t enough, the report notes that returning women vets earn, on average, $10,000 a year less in their civilian jobs than their men counterparts. Couple this wage discrepancy with the fact that less than 5 percent of VA homeless shelters offer gender-segregated housing, and the result is that women vets are twice as likely to end up homeless as male vets.

Homeless, traumatized by sexual abuse and suffering from PTSD? This is an appalling “Welcome Home!” for the women who have served our country. In May, President Obama took a first step in remedying this situation by signing a bill to bolster care for women vets, but more must be done. Today, as you observe veterans day, consider writing a letter to your congressional representatives or senators demanding that women veterans find peace–not continued warfare–when they reach America’s shores. 6,500 women vets will sleep on the streets tonight. Can 6,500 feminists take the time to write a letter–one for each of our brave sisters?