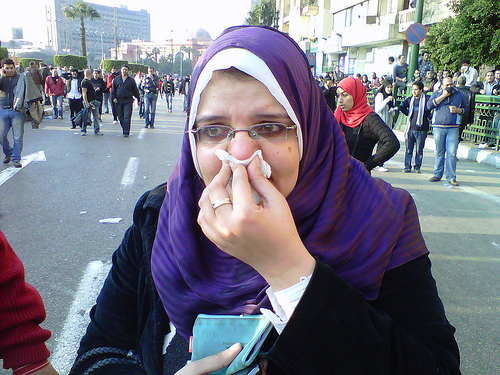 An unprecedented number of women participated in Tuesday’s “Day of Rage” in Egypt–much more so than in previous anti-government protests. Over at Slate’s Double X, Jenna Krajeski explains why.

The celebrated repeal of Don’t Ask, Don’t Tell didn’t address military policies barring transgender service, and many in the trans community are mobilizing to break down this barrier to equality. Over at Pam’s House Blend, transgender veterans talk about open military service.

From The Wall Street Journal: A growing body of research is finding that, contrary to the traditional view of economists that all money is interchangeable, the gender of the spender makes a big difference. Princeton Sociology Professor Viviana A. Zelizer explains the gender of money and what it means for the global economy.

Guardian columnist Madeleine Bunting argues that while world leaders (such as Hillary Clinton) have been vocal about the importance of global women’s empowerment, they need to demonstrate their commitment by properly funding the UN’s new agency for women.

An African American mother in Ohio is in jail for using her father’s address to have her children enrolled in a better (and predominately white) school district. Great job, America. (Via Clutch Magazine).

Colorlines had some great coverage this week:

Miss Representation, a new documentary on the portrayal of women and girls in the media, is getting some serious mainstream praise–including a Sundance Award nomination. Watch the trailer at Feministing.

Above: Woman at Tuesday’s protest Egypt’s “Day of Rage” in Cairo. Photo from Flickr user Muhammadغفّاري under CC2.0.

How Johnny Depp Turned Abuse Allegations Into a Comeback
Corporate Profiteering Is Driving Inflation
RSVP: Reproductive Rights on the 50th Anniversary of Roe