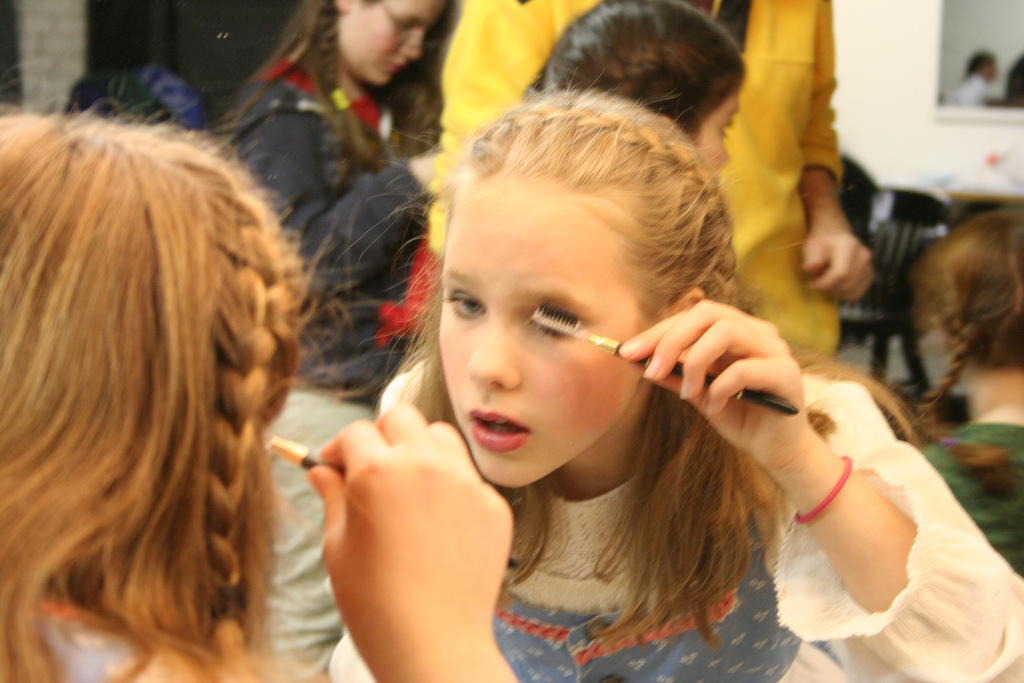 While women debate if 50 really is the new 30, with Walmart’s help 8 may be the new 18. On February 21, Walmart launches geoGirl, a line of cosmetic and beauty products specifically formulated for 8- to 12-year-olds.

The line, which boasts a total of 69 (let’s hope that’s coincidental) products, contains everything from eyeshadow, mascara and blush to exfoliator, anti-oxidant treatments and face soap. After all, what 8-year-old doesn’t need to slough off dead skin and elongate her eyelashes?

Don’t be surprised if this is the first time you’re hearing of geoGirl. The story broke last month but received minimal news coverage, probably because the corporate sexualization of young girls has become such standard practice that it’s no longer shocking and, therefore, not all that newsworthy.

Those who did protest geoGirl noted the clear psychological difference between the time-old tradition of playing dressup with mom’s make-up and very young girls owning, “real cosmetics with natural ingredients that will create return purchases and create a true beauty consumer.” Those were the words of Joel Carden, executive V.P. for Pacific World, the company behind geoGirl, who makes no bones about his company’s desire to make money and create consumers as young as possible. However gag-inducing, his statement is at least honest. Of their estimated $2 billion in buying power, tweens spend more than $24 million a year on cosmetics.

Citing any reason beyond the financial is like Sylvester trying to deny he ate Tweety while spitting out yellow feathers, but Walmart’s doing its best. According to company statements, geoGirl was launched in response to parents asking, “I really need to help and educate my child on how to take care of our skin.” One might think a pediatrician would be a better source for questions about a child’s skin care, but Walmart’s the apparent expert now and, as such, decided to lend a helping hand to parents looking for, “a healthier age-appropriate option for their tween girls who ask about wearing make-up.” (Words like no, unnecessary, inappropriate or damaging must never have crossed Walmart execs’ minds.)

Besides coming in recyclable packaging, geoGirl’s products are free of parabens, phthalates, sulfates, synthetic colors and fragrances. Considering most kids have no idea what parabens and phthalates even are, Walmart’s marketing strategy is clearly based on winning over their parents. This belies a sad reality: Kids have been so successfully marketed to over the past decade(s) that creating a need–the backbone of any advertising campaign–is no longer necessary. From Bratz to Britney Spears’ thong underwear to Miley Cyrus pole dancing, the desire for girls to be sexy and beautiful (at least by modern American standards) is already assumed.

Once upon a time, this “need” created conflict between tweens demanding to wear make-up and their finger-wagging parents. Not anymore.  Family-friendly Walmart has the perfect solution–make rebellion moot by encouraging parents to do the buying!

And should parents take the it’s-paraben-free! bait, at the end of the day it won’t be just corporations sexualizing girls at younger and younger ages. The parents will be doing it, too.