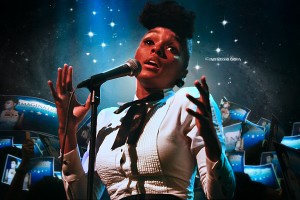 My awakening to Black feminist thought came in 1989 when Queen Latifah, with British rapper Monie Love, rapped about “Ladies First” and opened the music video for this powerful track with a pantheon of fierce Black feminist icons: Harriet Tubman, Angela Davis, Frances E. W. Harper. Coincidentally, in the realm of the academy, Patricia Hill Collins published Black Feminist Thought the same year. So imagine my disapproval when hearing Jay-Z define hip-hop as Black male expression while discussing his memoir Decoded with Oprah Winfrey.

There is no denying that hip-hop culture–which includes not just rap music but also DJing, breakdancing, graffiti, spoken word, urban fiction and street fashion–is defined primarily by a Black male sensibility. But its artists are diverse, dwell in different parts of the country and the world and, most importantly, include women who have shaped hip-hop history from its inception.

Women’s inclusion in contemporary mainstream hip-hop suggests that female emcees only provide eye candy and sexy gyrations, if we judge by the likes of Nicki Minaj or Lil’ Kim before her.  However, women’s involvement in the early days of hip-hop expanded beyond sexual objectification. During the ’70s, when this new musical expression first combined Jamaican deejaying remix skills with African American and Latinidad vernacular poetry at parties in the South Bronx, women were part of the scene and holding their own as DJs and emcees.  Groups like Sherri Sher’s Mercedes Ladies, the first all-female rap group, and rappers like Sha Rock of the Funky Four Plus One and US Girls, became pioneers. Even more significant was the work of Sylvia Robinson, co-founder of Sugar Hill Records, which launched in 1979 what is arguably the first commercial hit rap song, “Rapper’s Delight” by the Sugarhill Gang.

Outside of women’s roles as shapers and promoters of hip-hop was the development of hip-hop feminist consciousness. Academic feminists like Tricia Rose, Gwendolyn Pough, Kyra Gaunt, Imani Perry and Ebony Utley have developed a “hip-hop feminist studies” curriculum, and public intellectuals like Joan Morgan coined the phrase “hip-hop feminism.” We can also point to rapper Roxanne Shante, who spearheaded hip-hop feminism when she answered the rap group UTFO’s hit record “Roxanne, Roxanne” in 1984 with a “dis” record.  Providing an edgy, provocative counterpoint to the sexism prevalent in men’s rap songs, Shante’s record sparked what was then called the “Roxanne Wars,” which opened up a space for other women rappers to express their own desires and discontent–most notably Salt-n-Pepa, who began their career by dissing Doug E. Fresh and Slick Rick’s 1985 hit record “The Show” with their own “The Show Stoppa (Is Stupid Fresh).”

Female rappers following in their wake include artists as diverse as Queen Latifah, MC Lyte, Yo-Yo, Missy Elliott, Da Brat, Sistah Souljah, and Eve (whose Love is Blind Foundation–a name taken from her rap “Love is Blind“–raises awareness on domestic and sexual violence).  The most successful rapper at the time, Lauryn Hill, went on to win an Album of the Year Grammy award for her influential 1998 album The Miseducation of Lauryn Hill. Each of these women evolved from simply “talking back” to sexist scripts produced by men to articulating their own perspectives on sexual, racial and class politics. Curiously enough, such rappers have resisted the label feminist, even though more sexually provocative rappers, like Lil’ Kim, unabashedly claim sexual agency as a feminist act (through raunchy lyrics and videos) while also articulating desires for a younger generation of hip-hop feminists.

Beyond U.S. borders, female rap artists have addressed their realities as women of color on the fringes of society, including Monie Love and M.I.A. in the UK, ALIF (Attaque Libératoire de l’Infanterie Féministe) in Senegal, Arapeyat in Palestine, MC Trey of indigenous Australia, and Las Krudas in Cuba. Within U.S. urban cultural and transnational spheres, hip-hop has also influenced and been shaped by its Caribbean musical cousins–Jamaican dancehall reggae and Latin-based reggaeton–in which female emcees such as Lady Saw and La Bruja infuse gender and sexual politics in their lyrics. Additionally, women in hip-hop have shaped the culture as “b-girl” breakdancers, graffiti artists, deejays, hip-hop novelists, filmmakers and spoken-word poets.

But now that mainstream hip-hop has become corporate, such women have been mostly silenced (most infamously when Sarah Jones was fined in 2001 by the FCC for her “Your Revolution“ dis poem) or marginalized to make way for the video dancers, models and sex workers employed to fuel the hip-hop pornography economy. This is not to say that the women who participate in hip-hop through limited and sexualized roles–whether as video girls or sexually objectified emcees–are not still finding creative ways to assert gender and sexual politics or to push back against mainstream and corporate limitations. Even while Nicki Minaj plays to the dominant gaze, she renegotiates the space allotted her in popular hip-hop. And there’s still room for a Mama’s Hip Hop Kitchen, which puts community activism and local feminism first, or a Janelle Monae, who quietly lurks just below the radar with her androgynous appearance and throwback sounds that signify on women’s funky remix abilities.

The past history of women in hip-hop culture, and their continued work in the margins, needs to be remembered and acknowledged. So here’s to those women who keep on proving that hip-hop is not just Black men’s music, contrary to what Jay-Z would have us believe.