Imagine There's No Gender: It's Not Easy, But We Can Try - Ms. Magazine
Skip to content 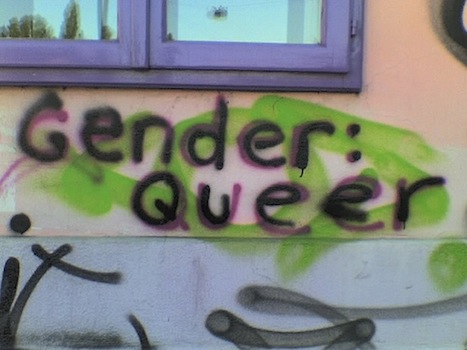 “Imagine a world without gender.”

That’s the directive in the email signature of Judith Lorber, author of Breaking the Bowls: Degendering and Feminist Change. It’s one I find deeply inspiring, but I can already hear the chorus of feminist objections. Let me address some of those from my perspective as a feminist sociologist.

Without gender, we’d all just be a uniform mass of people dressed in the same burlap sack or something. (I’ve heard this from students.)

Quite the opposite! Our gender structure forces each of us into a woman-or-man binary, each of which comes with an extensive list of Dos and Don’ts. Gender is already making us too uniform. If the Dos and Don’ts disappeared, we would enjoy a dazzling kaleidoscope of diversity. People would play with their appearance, or not, according to personal interest rather than in keeping with existing norms that instruct us from our head down to our toenails. Genderqueer, intersex and trans people are stigmatized at present, but give us a glimpse of the kaleidoscopic possibilities in our future. Imagine the liberation of ridding families and workplaces of their gendered Dos and Don’ts.

But I like gender! Who am I if not a woman, and who is my child if not my son, the boy?

It’s true: Gender is very important to our identities, and it orients us in interacting with others. Theorists acknowledge that one byproduct of eliminating gender would be “gender vertigo,” an unsteady and vulnerable feeling. My belief is that this isn’t insurmountable: We would have to adjust and recover, but it would be worth it in the end. With the oppressive structure of gender gone, we would all be more free.

But gender is what makes sex hot. (I got this response on Twitter to the mention of degendering.)

Well, yes: the way things are now, gender makes sex hot. That can include both the traditional heterosexual script and the many options for bending and playing with gender. But although people make use of gender, it doesn’t follow that they need to. I have no doubt that there are plenty of other ways to generate heat in the bedroom.

Beware: If we decide to officially ignore gender, we might just allow injustices to continue unchecked.

This is a legitimate concern, which echoes criticism of “colorblindness.” For instance, if we stopped collecting racial data in the U.S. Census, we would no longer know whether children of color have higher risks than white kids of poverty or exposure to pollution. Sadly, they do, and post-racial colorblindness is absolutely no way to solve the problem; by definition it is a way to ignore the problem. For both race and gender, research and intervention must continue as long as “there’s a there there.” In the imagined future when the researchers have no more findings to report, then they would finally be out of business.

People won’t want to work together on this across lines of class, race or sexuality.

Yes, history shows us that sometimes movements for a single social justice are weakened because of internal divisions along another axis. To be more blunt, the women’s movement has been plagued at times by classism, racism, transphobia and homophobia. Ideally, everyone opposed to injustices would band together in the spirit of bell hooks to fight oppression of all kinds. If that day comes, I will dance with joy in the streets. In the meantime, if we cannot orchestrate synchronized action, we can at least expect actions that are parallel and not at cross-purposes. So: Work to end gender should support other social justice work where possible, and at the least do it no harm.

Speaking of social justice work: why spend time on this pie-in-the-sky degendering, while women are being raped, beaten and murdered the world over?

Indeed, it’s mainly the secure and educated who have the luxury of these discussions. I’m not trying to claim that degendering is the most urgent of all social justice actions. This theorizing is at some distance from the “front lines,” but absolutely not unconnected. It can put all sorts of social justice work into a larger context and expand our ideas about what is ultimately possible.

I may not have entirely quelled your objections to a world without gender, but I hope I’ve at least piqued your interest. The next question people usually have is: Could it ever really happen?

Ending gender is, indeed, no simple task. It would require a multitude of actions in many different kinds of places. It’s helpful to think in terms of three levels of society: individuals, institutions and interactions. (See Risman 1998 & 2004.)

The second wave of American feminism made great inroads here. At the institutional level, we celebrate the victories of laws for equity like Title IX, and laws against gender-based harassment and discrimination at work. Encoding equal treatment into law is an important prerequisite to doing away with gender. At the individual level, many Gen-X-ers like me were raised to the tune of Marlo Thomas’s Free To Be You And Me and encouraged to ignore outdated stereotypes of boys’ and girls’ activities.

Still, you don’t need to watch Toddlers and Tiaras to know that children are still being raised in very gender-specific ways. As Gloria Steinem said, “We’ve begun to raise daughters more like sons… but few have the courage to raise our sons more like our daughters.” I agree, and I would set the goalpost even further: that we evolve to the point where her statement is as meaningless as the prospect of “raising the blue-eyed more like the brown-eyed.”

The inroads at the individual and institutional levels have only yielded modest, inconsistent success. So, more recently, scholars have acknowledged the importance of an intermediate level, that of interactions. We know now that to be effective, we must intervene at all three levels of society. We cannot choose one “primary” one as the driver of the other two; unfortunately, life isn’t that simple. (One of my professors quips: “Sociology isn’t brain surgery. It’s way more complex than that.”)

The whole prospect of the end of gender, after all, is about fairness. We know that “separate but equal” has a history of failure, so let’s do away with all the separateness. In the end, we would gain back so much energy that’s now wasted on power struggles and on following, or sometimes bucking, the myriad prescriptions of gender. Instead, personal freedom would expand for everyone. It’s worth imagining.

The Good Men Project and Role/Reboot have collaborated on a special series about the End of Gender. Dozens of bloggers are taking on Hanna Rosin’s ongoing (and recently reignited) “End of Men” argument and what meaning gender has in contemporary society. This collaboration includes bloggers from Good Men Project, Role/Reboot, The Huffington Post, Salon, HyperVocal, Ms. Magazine, YourTango, Psychology Today, Princess Free Zone,The Next Great Generation, and Man-Making.

Five Ways to Have a Feminist Valentine’s Day

Sex Sells—But Why? and How? Author Maria San Filippo on Sexual Provocation in Film and TV
Financial Education Won’t Fix Poverty. We Need Structural Change.
Women in Biden’s Cabinet Need to Be Seen and Heard