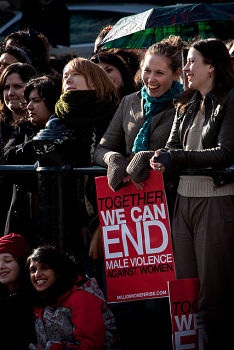 For the eleventh #HERvotes blog carnival, we’re joining together to urge the reauthorization of the Violence Against Women Act (VAWA).

Domestic violence results in over two million injuries every year. Three women die every day in the United States as the result of domestic violence. But there was a time when things were even worse: The rate of intimate partner violence has declined by 67 percent since the passage of VAWA in 1993. VAWA provides services to victims of violence and has improved the criminal justice response to violence against women.

This week, at last, the Violence Against Women Reauthorization Act will be voted on by the whole Senate. Currently, 61 Senators (53 Democrats and 8 Republicans) are co-sponsoring the reauthorization. HERvotes is urging all Senators to vote yes. Eliminating violence against women is not–and must not–be a partisan issue.

HERvotes urges Congress to reauthorize this landmark legislation and extend VAWA’s lifesaving programs and services for another five years.

Join us by sharing the posts below on Facebook, Twitter (using the hashtag #HERvotes) and other social media. We’ll keep updating this page with more posts, so check back often!

Why is the U.S. Senate is Playing Politics with Violence Against Women?– Gloria Lau, YWCA USA

Violence Is a Cycle: We Must Reauthorize VAWA -John Roach, Break the Cycle

Hey Congress, How About Giving Half the Population Some Love? -Janet Hill, Coalition of Labor Union Women

“It’s a Good Time To Be a Black Woman? Well, Not So Good When It Comes To Violence”– Angela Sutton, Black Women’s Health Imperative

Click here to thank the act’s sponsors and to urge all non-sponsors to support it.  (Hadassah)

#HERvotes, a multi-organization campaign launched in August 2011, advocates women using our voices and votes to stop the attacks on the major advances of the women’s movement, many of which are at risk in the next election.