In North Carolina, You're Married or You're Screwed - Ms. Magazine
Skip to content 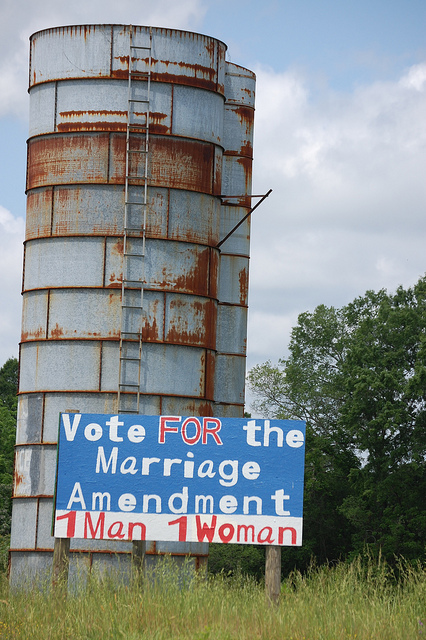 A marriage is now between one man, one woman and God Almighty in North Carolina.

Following a vehement campaign fraught with religious zeal and bipartisan politics, North Carolina residents voted Tuesday in favor of Amendment One—which will change the state’s constitution to outlaw not just same-sex marriage, but all domestic unions.

An unusually high number of registered voters turned up at voting booths across North Carolina to cast their ballots. Although early reports speculated about voter fraud in several counties, Amendment One passed by more than a 20 percent margin (about 61 to 39 percent), erasing any doubt as to the sentiments of North Carolina voters.

North Carolina is hardly the first state to add a constitutional amendment banning same-sex marriage–in fact, it’s the 30th in the nation and was the only Southern holdout.

But the outcry over Amendment One extended beyond the gay marriage debate, because the amendment bans civil unions and domestic partnerships for all couples—gay or straight.

Religious rhetoric largely drove the Vote For Marriage campaign, which frequently claimed in television ads that heterosexual marriage has been the “foundation of our society … since the dawn of mankind.” The Vote For Marriage website also stressed that same-sex marriage would “redefine marriage for everyone.” Backers said Amendment One would make the state less vulnerable to “activist judges” who could overturn previous anti-gay-marriage statutes in a single ruling.

Amendment One can only be overturned with a three-fifths vote in the state legislature and voter approval.

Critics of the amendment not only advocated for marriage equality, but also raised concerns over the amendment’s overreaching wording. Domestic partnerships are utilized by both gay and straight couples, who now fear they and their children will lose health benefits because of the amendment.

Although members of the Vote For Marriage campaign said they were not anti-gay but “pro-marriage,” there has been an increasingly turbulent anti-gay attitude this year in state legislatures across the South and Midwest. The Tennessee state legislature recently introduced a “Don’t Say Gay Bill,” which would erase all language referring to homosexuality from their elementary and middle school sexual education programs. The bill has died in the House.

Earlier in the year, a Tennessee representative also introduced the transphobic “Bathroom Bill,” which would fine those who do not use the public bathroom that matches their birth-assigned sex. This bill has also failed to pass.

In April, Missouri proposed a similar anti-gay education bill, which would prevent sexual orientation and the “homosexual agenda” from being discussed in schools and extracurricular activities. The bill is still being debated by state politicians.

There are only eight states in which gay marriage is legal in the U.S. (including Washington and Maryland, where newly passed laws have yet to go into effect). Even smaller is the number of states that recognize civil unions. Vermont—which has since legalized gay marriage—was the first state to legalize same-sex civil unions; Delaware, Hawaii, Illinois, New Jersey and Rhode Island soon followed.

A majority of the country’s state legislatures, however, still deny gay couples the right to a legal partnership.