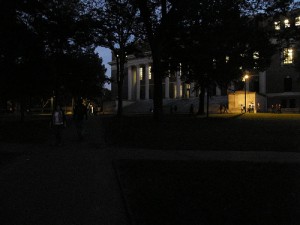 After-rape is to be consumed by emptiness, isolation, fear, shame and anger.

After-rape at college is to be confronted by my rapist every day—on the quad, in the library, at breakfast. It is to be ceaselessly reminded of the moments in which power and control were stripped from me, in which I had no option but to let go and resign myself to the fact that this was really happening.

I was raped my sophomore year of college by a male student at my school. In the weeks after the assault, he followed me around campus, physically blocked me from going up the steps into my dorm and threatened my friends. One Friday at 3 a.m. he tried to break into my room while I sat terrified inside.

The rape and harassment changed everything for me. I couldn’t eat. I couldn’t sleep. I stopped studying. School was no longer on my radar screen. I was just trying to make it from one day to the next. I considered dropping out.

I found out about Title IX by chance, through a lawyer friend. She told me,

Title IX is not just about sports. It says your college can’t make you leave school because you were raped and feel unsafe. They’re supposed to make sure the campus is not a sexually hostile environment.

It seemed so sensible once she’d said it, but I’d never heard anything about my supposed right to a safe educational environment ever before.

Turns out, Title IX grants survivors of sexual assault a number of rights by requiring schools to:

But too many colleges aren’t fulfilling their Title IX obligations. I have survivor friends who have been pressured into staying silent in all sorts of ways, from being gently dissuaded from going through a “really draining process” to being flat out told to shut up and go home.

And even when victims do speak up and file formal complaints, the response is often bleak. The Center for Public Integrity found that most students deemed responsible for sexual assault on college campuses face little or no consequences. At my college, only one student has ever been permanently expelled for rape—and that was only after he’d been sentenced to time in prison. In recent years, most students found responsible for sexual assault were suspended for two or four semesters. (A student found responsible for stealing a laptop was suspended for five.)

It’s been 40 years since Title IX became law. It is high time schools begin to take their legal obligations seriously and work to ensure that every student has a safe educational environment free from violence and harassment.

No one should have to be afraid to sleep in her own college dorm room.

Reprinted with permission from the National Women’s Law Center.

Dana Bolger is a feminist, student activist, and intern at the National Women’s Law Center. She attends college in Massachusetts. You can follow her on twitter @danabolger.