Once again this summer, I had the privilege of moderating sessions during the Spotlight Health Aspen Institute Ideas Festival. There were some surprises in a session titled “Breakthroughs and Challenges in Women’s Health” with importance for all women, and I want to share some of that information with you. 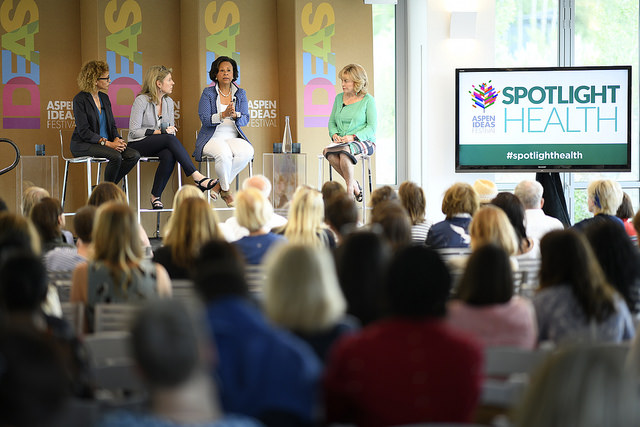 With two esteemed physicians—Dr. Deborah Rhodes of the Mayo Clinic and Dr. Paula Johnson, who was chief of women’s health at Brigham and Women’s Hospital at Harvard University and is now the president of Wellesley College—and science journalist Linda Villarosa, we began our conversation with the important reminder that improving health care depends in large part on research.

Dr. Paula Johnson talked about the disparity between the resources for research on men’s diseases and those specific to women in her 2014 TEDWomen talk—and if you haven’t seen it, I highly encourage you to watch it.

Dr. Johnson explained that every cell in the human body has a sex, which means that men and women are different right down to the cellular level! As a result, there are often significant differences in the ways in which men and women respond to disease or treatment. It’s very important in research trials to differentiate between female and male subjects so we can tease out the differences.

Although we have made progress since the 1990s with more women included in late-phase trials, we’re still not there in phases one and two. This is important, she says, because how do we get to phase three? Phases one and three. In these early stages of research, female cells and female animals still aren’t being used. Why? She says one commonly cited reason is that female animals have an estrous cycle. Well, guess what, she says, so do we. What are we missing by not including female cells earlier in the research process?

One of the barriers to progress that perhaps we don’t think about as much is the problem with well-entrenched power paradigms, profit motives and institutional priorities. What happens when a doctor sees a need and solves it but the status quo is preferred over progress? 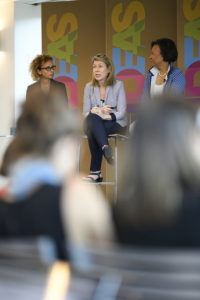 Dr. Deborah Rhodes—whose TED talk from TEDWomen 2010 is a must—spoke about the challenges to her attempts to introduce a new diagnostic protocol for women with dense breasts. Dr. Rhodes (who in spirit of full disclosure is my personal physician at the Mayo Clinic) has observed in her practice that about 50 percent of women were potentially missing a cancer diagnosis because traditional mammograms fail in detecting breast cancer in women with dense breasts. Mammograms depend on visually seeing cancer cells and in dense breasts this is more difficult because of the surrounding dense tissue.

As Dr. Rhodes says, in looking at entrenched paradigms in medicine, there is perhaps nothing more entrenched than the mammogram. She worked with physicists to come up with a new way to look for tumors using a tracer that has been safely used in cardiovascular medicine for decades that distinguishes tumor cells regardless of density. Her technique is FDA approved but you’ve probably never heard of it. It speaks to, as she says, “the extraordinary difficulties of upsetting something that is so precious to us as a mammogram.”

Earlier detection using her new test in women with dense breasts whose cancer may be hidden in a mammogram could spare women from toxic treatment—less advanced cancer means less chemotherapy—and, in more advanced cases, saving lives. Despite that, her research has been very, very difficult to fund. She says it’s a daily uphill battle to overturn the status quo. Doctors have invested years and years in learning how to read these difficult mammograms, and billions of dollars are invested in the current technology, resulting in a resistance to new technology and new ways of testing. 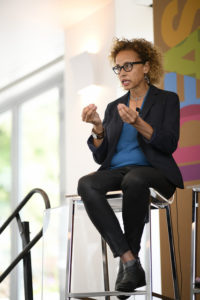 The same tragic disparity between what we need to know for better health outcomes and what is fully understood as life and death factors was the subject of Linda Villarosa’s recent cover story in the New York Times Magazine: “Why America’s Black Mothers and Babies Are in a Life-Or-Death Crisis.” In her incredible article, she noted that Black women were three-to-four times as likely to die in childbirth than white women and Black babies die at a rate that is twice that of white babies

Linda was one of the first journalists to put the maternal and infant mortality rates together and to investigate why Black women and babies are so at risk, explaining, “a common theme here is that the data exists, but it has been ignored or beaten back.”

And further, she connected a condition identified earlier by Dr. Arline Geronimus called “weathering” that is a significant factor in the health outcomes for women of color. “The effect of racism—living with the near daily episodes of micro-aggressions and discriminations,” she observed, “have an adverse impact on health that needs to be better understood and incorporated into diagnosis and treatment for women of color.”

Shocking, yes, and deeply disturbing—but the good news is that the more we know about our own health and what impacts it adversely, the more proactive we can be as health consumers. As one of the panelists noted to this highly engaged audience at Aspen Institute: “Nothing less than our lives depends on being informed and demanding that our health care institutions and physicians are, too.”