The World Economic Forum estimates that it will take over 200 years to close the gender pay gap. No one should have the patience to wait that long. How can we accelerate change? The answer may lay in data and models with a good dose of transparency.

First, let’s clarify what we mean by the pay gap. There are two different pay gaps, with different meanings and root causes.

The absolute pay gap is the difference in average pay between men and women. This is estimated to be about 19 percent in the U.S.—and if broken down by ethnicity, the gap is much larger for women of color.

In recent years, some individual states (California, Massachusetts and New York, to name a few) have introduced new legislation to improve the legislative framework surrounding equal pay and thus accelerate the closing of the pay gap. For example, California reversed the burden of proof in equal pay cases, and Massachusetts made it illegal for employers to ask about an applicant’s prior pay. However, the impact of these regulatory changes is unclear.

What’s Worked to Close the Gender Pay Gap in Europe?

On the other side of the Atlantic, however, some European countries have taken a different route. The UK requires companies to publicly disclose their absolute pay gap. Similar law was enacted in Denmark in 2006—where a recent study found that public reporting has reduced the gender pay gap by 7 percent in just the first two years since the legislation was introduced.

Anecdotal evidence from the UK signals that the requirement to report the absolute pay gap has driven organizations to take a hard look at their structure, the advancement of women within the organization and equal pay practices.

France has taken a different approach by imposing penalties on companies that do not achieve a certain minimum score on an equal pay index.

Finally, Iceland was the first country to require all organizations with more than 25 employees to adopt an equal pay standard and become equal pay verified. While the Icelandic legislation does not make the pay gap itself illegal, it does require companies to conduct an equal pay analysis annually.

What these efforts on the other side of the Atlantic have in common is that they all require organizations to measure their pay gaps. As the worn-out saying goes: you can’t manage what you don’t measure. If organizations are not measuring and analyzing their pay structures using their internal data, they are probably not making large strides towards ensuring equal pay.

And this lack of progress does not arise from a lack of good intentions. For instance, one HR visionary in equal pay, equal access and diversity measured the pay gap within her organization and found that top performing female employees were not being paid on par with top performing male employees. At another company, a COO who was responsible for HR and compensation functionality measured an 8 percent unexplained gender pay gap. With support from top management, everyone agreed to be very mindful of the gap in all decision making over a one-year period.

But when they measured the gap again, it remained at 8 percent. Both of these companies enlisted the help of data scientists and were only able to make progress after analyzing the pay structure, understanding where biases lie and taking corrective action allowed them to make large strides towards closing the gap.

All of these examples show that increased transparency helps nations and organizations make strides towards fair pay.

At the individual employee level, making it illegal to forbid salary discussions can help underpaid employees discover that fact.

At a higher level, we observe that public disclosure of the pay gap in the UK is promoting internal dialogue about the steps taken to improve fairness within the organization. In Iceland, companies are required to disclose the results of their pay gap analysis to their employees and to create a 12-month action plan. This creates internal pressure to do better, year after year.

How Do We Accelerate Change?

Change starts with enabling organizations to openly measure, discuss and take corrective action. It’s also essential to understand that addressing demographic pay gaps within any organization is not a one-time fix—it’s a journey.

The journey starts with gathering the data and understanding the pay structure. Then companies move on to identifying areas for improvement and eliminating unexplained demographic pay gaps through corrective action—in other words, ensuring equal pay for equal work.

Then a deeper dive into the data allows decision-makers to understand what drives the absolute pay gap within the organization and what barriers different employees face, from lack of flexibility to inequity in promotion. Then those barriers can be removed one by one.

Dr. Margret V. Bjarnadottir, Assistant Professor of Management Science and Statistics in the Online MBA program at the University of Maryland. She is the author of academic publications of data-driven approaches to closing the pay gap and the co-founder of PayAnalytics.

The Wage Gap is Leaving Native Women Behind 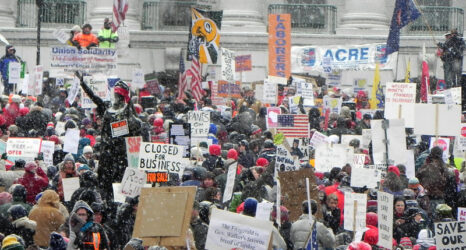 The Taliban Further Tightens Its Grip on Afghan Women and Girls: “These Young Women Have Fought for Themselves”
Student Activists Are Breaking the Silence on Period Poverty
In Indigenous Thriller “Night Raiders,” Danis Goulet Blends History, Sci-Fi, Legend and Reality