June 2, 1920: Deeds, not words, were demanded of the Republican Party today by Alice Paul and the National Woman’s Party when Delaware refused to become the 36th and final State needed to ratify the Susan B. Anthony (women’s suffrage) Amendment to the U.S. Constitution.

Though the Republican National Committee unanimously passed a resolution yesterday reaffirming its support for the Anthony Amendment, and strongly urged Republican legislators in all unratified States to vote for it, members of the Republican-controlled Delaware Assembly voted 24-10 against bringing up the proposal for a vote. The Assembly then adjourned, dooming any chance of passage there this year.

Because passage of the suffrage amendment was blocked for so long by Southern Democrats in Congress, many State legislatures had already adjourned by the time it was finally passed by Congress and sent to the States for ratification on June 4 of last year. These legislatures cannot meet again until their next regular sessions – after the November elections—unless their governors call them back into “special sessions.” So the few Statehouses still doing business are critical to achieving victory before the November 2 Presidential election.

Today’s rejection by Delaware has resulted in Alice Paul asking thousands of suffrage supporters nationwide to join her in a protest against the party that’s now holding up the enfranchisement of millions of women in States which presently bar them from the polls.

Though the Republican Party provided the vast majority of the votes needed for the Anthony Amendment’s passage by tow-thirds of both Houses of Congress (200 out of 304 “Yes” votes in the House and 36 of 56 affirmative votes in the Senate) and is the party which controls 26 of the 35 legislatures that have ratified so far, it will nevertheless be Republicans who will be the targets of protest for now. As explained in Alice Paul’s appeal:

“The Republican Legislature of Delaware refuses to ratify the suffrage amendment. The Republican Governors of Connecticut and Vermont, where the legislatures are counted on to ratify, refuse to allow their legislatures to meet. We are confronted by a serious emergency. It looks as though Republican opposition would prevent millions of women from voting this November. Will you join us on June 8 at the Republican National Convention in Chicago in a demonstration of protest against Republican action in holding up ratification in the one State needed ? The demonstration will probably take the form of a line of women in front of the convention hall with banners of protest against the opposition of the Republicans.”

President Wilson, a Democrat who was at one time the principal object of the National Woman’s Party’s protests due to his refusal to support the Anthony Amendment, or to be actively involved in the struggle to get it passed by Congress after he endorsed it, has become a vigorous advocate of suffrage. He finally endorsed the Anthony Amendment the day before a vote in the House in January, 1918. It passed the next day by exactly the two-thirds majority needed. Then on September 30, 1918, he went to the Senate in person to urge a favorable vote on suffrage the next day. Though unsuccessful in changing any votes, it was still a stunning gesture.

As just one recent example of his efforts, President Wilson sent the following telegram to three leading anti-suffrage Democrats in the Delaware Assembly:

“May I not as a Democrat express my deep interest in the suffrage amendment and my judgment that it would be of great service to the party if every Democrat in the Delaware Legislature should vote for it ?”

But despite the President’s plea, as well as that of the Central Labor Union of Wilmington, no votes were changed. Since there are still five months left until the Presidential election, there is some hope that the Anthony Amendment may yet become the 19th Amendment by that time, but it’s uncertain where the 36th ratification might come from. Meanwhile, the battlefront will temporarily shift to Chicago.

“Section 2: Congress shall have power to enforce this article by appropriate legislation.” 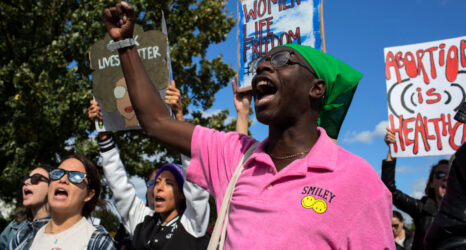 Abortion Rights and the ‘Quick Child’: The Misuse of History in Wisconsin’s Abortion Ban