Prior to the Hamilton case, in Southern states, it was not uncommon for Black Americans to suffer the indignities of being called N***** by law enforcement, jurors, attorneys or even judges in court, during court proceedings or jury deliberations.

Hamilton’s case resonates in the wake of Rep. Ted Yoho (R-Fla.) accosting and hurling a misogynistic slur at Representative Alexandria Ocasio-Cortez (D-N.Y.).  This week, he called her “disgusting,” “a “f***ing bitch” and at first denied it, but then refused to apologize for it.  He was overheard by a reporter.

Misogyny in politics is nothing new.  A couple years ago, another Florida politician—Sen. Frank Artiles—called a Black state legislator, Audrey Gibson, a “bitch” and referred to her as “girl.”

In the case of Ocasio-Cortez, last year, President Trump urged her to “go back” to where she came from—although she is American.  The special venom and bigotry behind such slurs lobbed at women of color are unmistakable as history teaches us.

For me, that’s why Ms. Mary Hamilton’s story comes to mind.

The ruling for Hamilton was another strike against strident white supremacy, which infected the venerated halls of America’s courts as well as its cities and towns.

Black women had long been demeaned with the denigrating moniker “girl”—particularly in the South, as a means of reminding them of “their place,” erasing their identities, and rendering them fungible and invisible.  “Girl” encapsulated the nation’s lie that adult, even elderly Black women were infantile, lacked capacity and did not deserve respect even as adults—no matter their age, status or stature.

Such humiliations were marks not only of social microaggressions, but also Southern white supremacy.  The campaign to render Black people “inferior” occupied nearly every aspect of American life.

The names “Mammy” and “niggra” emerge from this too: No need to acknowledge the name of the woman who nurses the children in white families, cleans their homes and cooks their meals.

Maurice Manring’s “Slave in a Box: The Strange Career of Aunt Jemima” addresses this symbolism found in popular culture and across books and advertisements.

In Mary Hamilton’s case, she was a young civil rights activist who traveled south in the struggle to end racial discrimination.  Although ten years after Brown v. Board of Education, the south fervently held to racism in housing, schooling, employment and voting.

This brutal social order is captured across myriad black and white photographs and videos here, here, here, and here, of fire hoses and dogs on children, women and men.  Children as young as seven and eight hauled off in patrol wagons for peaceful demonstrations pleading equality in schooling.

As a Freedom Rider, Mary Hamilton was arrested, jailed with men, subjected to nonconsensual vaginal exams, beaten and verbally abused—yet she continued her work across Tennessee, Mississippi and Alabama, registering Black people to vote.

In court, when prosecutors and a judge refused to properly address her, she answered ,”I won’t respond until you call me Miss Hamilton.”  She was held in contempt of court and sent back to jail.

As one reporter noted, this was not “just about an honorific.”  Rather, “it was about respect and racial equality” in a country that honored Confederate traitors more than it embraced Black citizens.

The NAACP Legal Defense and Education Fund, which took on the litigation, argued the long history of demeaning Black women by refusing to acknowledge their full names and accord them the formal honorifics used with white women in court, was a form of racial discrimination, reflecting a longstanding racial caste system, and as such violated Ms. Hamilton’s constitutional rights. They won.

That was 1964, but clearly this fight for respect within our legal institutions and workplaces is not over for women generally, and particularly for women of color.

This week, in a rambling response, Rep. Yoho offered a meandering speech about his passions, his wife, his daughters and the pain of growing up poor.  As he explained to the public “I cannot apologize for my passion.”

She deserved better. Honestly, the girls and women of our nation deserve better. We all deserve better—because such misogyny harms men and boys too, creating bullies in them who lack the capacity to be introspective and the courage to be accountable.

But sadly, this type of abusive, misogynistic behavior is not new, as Rep. Ocasio-Cortez explained to colleagues in a House floor speech.  And, this is the problem.  As she pointed out:

Mr. Yoho was not alone. He was walking shoulder to shoulder with Representative Roger Williams, and that’s when we start to see that this issue is not about one incident. It is cultural. It is a culture of lack of impunity, of accepting of violence and violent language against women, and an entire structure of power that supports that.

She’s right.  One recent study revealed that nearly 75 percent of workplace bullies are men, and most of their behavior targets women.  Not surprisingly, often its female victims who either leave such toxic jobs, disrupting their lives, or because of economic hardships suffer through office abuse, which is compounded by the silence of their colleagues and bosses. This becomes a different type of economic violence.

But the silver lining here, as in the case of Ms. Mary Hamilton, both women spoke out, naming and confronting abuse and misogyny within our legal institutions.  And, by shining a light on this, they inspire other women and girls to reject male misuse and abuse of power.  For that we can all be grateful. 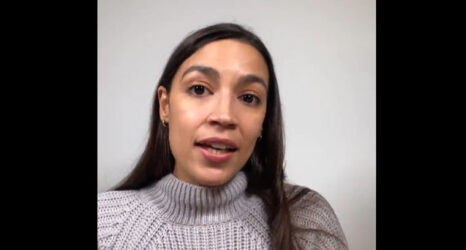 Rep. Alexandria Ocasio-Cortez’s Instagram Live Could Have an Impact on Assault Survivors

Think Build Back Better Is Expensive? Wait Till You Hear the U.S. Defense Budget.
Paid Leave to Save Your Life
Rest in Power: Kamla Bhasin, Feminist Icon of India