February 17, 1913: It’s day six of the suffrage hike from Newark, New Jersey to Washington, D.C., and the intrepid pilgrims have now passed the 100-mile mark while covering 14 miles from Philadelphia to Chester, Pennsylvania.

That’s a shorter than average distance for a day’s hike, but the condition of their feet now makes each mile seem much longer than at the start. Several local, temporary recruits came along for the day as well, one of whom has actually voted. While a resident of Wyoming (where women won the vote in 1869), she cast a ballot for William McKinley, elected President in 1896 and 1900.

Though heavy snow was falling as the hikers left Philadelphia’s Hotel Walton this morning, a crowd of several hundred still turned out to cheer them as they formed into a single file and began marching to the beat of a fife and drum corps at the head of the line.

Today’s first stop was at the University of Pennsylvania, whose students were so eager to meet the pilgrims that they came out to greet them as they approached, then performed a “snake dance” as they led their visitors to the campus. At least a thousand students were waiting there at a “Votes for Women” rally at the law school, as were 200 police officers. The city did not wish to be unprepared today, as was the case yesterday, when only 6 officers were assigned to deal with 2,000 unruly citizens when the hikers arrived in Philadelphia. The college rally was totally peaceful and supportive.

Snow was still falling heavily as the troops left the college. In addition to slowing their pace a bit, the storm gave plenty of ammunition to a group of small boys who ambushed the hikers with snowballs in Leiperville. The suffrage army kept advancing even under fire, however, and was soon assisted by a squad of mounted cadets from the Pennsylvania Military College, who quickly routed the attackers. The hikers think the little boys had been encouraged to launch their volley of snowballs by older citizens of the town, who seemed to greatly enjoy the battle from the sidelines.

The pilgrims’ arrival in Chester was announced by the bells of St. Paul’s Church, then the Chief of Police escorted them to a tea held in their honor at the Y.M.C.A. Speeches of welcome were given by the mayor’s wife, and the President of the Men’s League for Equal Suffrage of the University of Pennsylvania. Despite having to march another 14 miles to Wilmington, Delaware, tomorrow, the hikers still chose to spend the evening giving speeches at a well-attended suffrage rally in the public square, rather than resting or sleeping, so their enthusiasm remains undiminished! 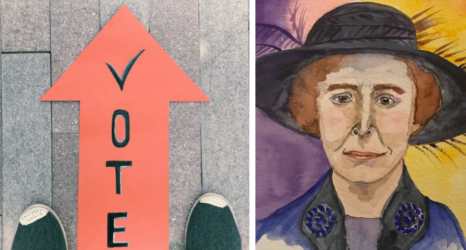 Women Need Their Jobs Back for This Next Phase of the Economic Recovery
Pushed to be Betty Draper, I Was Always More Like Don
Keeping Score: VP Harris Becomes First Woman to Hold Presidential Power; Rep. Gosar Censured for Violence; 2021 Is Deadliest Year for Trans People