On the Power of Choice and Imagination: The Ms. Q&A with 'Women Talking' Producer Dede Gardner - Ms. Magazine
Skip to content

Already showing in select theaters and releasing nationwide on Jan. 27, Women Talking (written and directed by Sarah Polley, based on a novel by Miriam Toews) is both beautiful and harrowing: an ideologically captivating drama about how a group of women with very little agency navigate making a choice that will have profound effects on their lives, their children’s lives and their community. This extraordinary film features an equally extraordinary ensemble cast, including Rooney Mara, Claire Foy, Jessie Buckley and Judith Ivey, with Ben Whishaw and Frances McDormand.

The film takes place in 2010 in an isolated religious community, where it’s been discovered that men and boys have been drugging and raping the women and girls while they sleep (an act that is referenced throughout the film, but never shown).

Women Talking concentrates on the small group chosen to make a crucial decision for all the women and girls in the colony: stay and fight back, or leave. What follows is multifaceted debate about trauma, power, faith and choice that vacillates between compassion and fear and between resignation and rage. The women talk, they disagree, they fall apart, and they come together in ways impossible to describe in a few paragraphs.

Based loosely on a true story, Women Talking nevertheless positions itself as an “act of female imagination,” as it tells us in an opening title card. The characters and their conversations seem to exist in a world outside of time, bracketed by the voiceover narration of one of the girls present at the meeting (Autje, played by Kate Hallett)—a radical and formative dreamscape of community action, philosophical debate and consensus building.

For all its quiet contemplation, Women Talking is a provocative and gripping film that will challenge viewers to ask difficult but necessary questions about how to move forward from the unspeakable and how to choose when there is no easy path.

Ms. had the opportunity to speak with producer Dede Gardner about her work on the film and its reflection of the power of community, of choice, and of imagination. A two-time Oscar-winning producer (for Best Picture winners 12 Years a Slave [2013] and Moonlight [2016]), Gardner is also the president of Plan B Entertainment and has been a producer on an impressive array of projects (including Tree of Life [2011], Selma [2014], If Beale Street Could Talk [2018], and She Said [2022]).

Aviva Dove-Viebahn: A lot of your work has been producing films that feature underrepresented or marginalized groups and also social justice issues. How do you see Women Talking fitting into your body at work?

Dede Gardner: Well, I make a joke that if you make two movies called ‘Women Talking‘ and ‘She Said‘ in the same moment, it’s a field day for my therapist!

I think it fits. When I look for material, and when I decide that I want to make something, it’s really only ever story first. I come at it from the inside out. Have I fallen in love with a narrative? Do I feel like it hasn’t been told before? Do I feel like I’ll be sad if I don’t try and make it and put it out into the world?

I think I’m interested in the idea of complicity. And if there were one thing that I think is to greater and lesser degrees inside all the films [I’ve produced], it would be that.

Dove-Viebahn: You made the joke about your therapist, but this is also about a cultural moment, right—that we have this film and She Said coming out at the same time?

How do you think about the parallels—even though Women Talking is set in a very isolated community? It may not be part of the wider world, but there are visible parallels to things that are happening culturally right now.

Gardner: Yes, obviously this is all in the conversation and the culture. But, someone I know saw the film and said, “Well, I don’t understand? Why don’t they just leave?” I think that’s such a fundamental mistake—so lending understanding to why, and for what reasons, and how hard all these decisions are, felt really important to me.

I also think despite the specificity of this story—this setting, this community, the conditions of the movie—the movie’s narrative has huge applicability. It occurred to me the other day [that] I think about “am I going to do nothing, am I going stay and fight, or am I going leave” every moment of my life, to big things and small.

I’ve been so struck by how wide the aperture of the conversation can be. I think the conversation they have in that hayloft and that you see hearts and minds changing over time as you listen to other people—that feels miraculous right now. It’s a conversation outside of an echo chamber, and we’ve all been so funneled into our own echo chambers that doing that and doing that cinematically—it felt like we had to try and, if we could pull it off, it would feel really radical.

Someone I know saw the film and said, ‘Well, I don’t understand? Why don’t they just leave?’ I think that’s such a fundamental mistake—so lending understanding to why, and for what reasons, and how hard all these decisions are, felt really important to me.

Dove-Viebahn: I was struck by how the film emphasizes their collective decision-making. They have to make these decisions together. It would seem like the easier path to have individual women and families do what they felt was best, but instead they elect to have everyone come together. I wonder if you can speak to why that’s an important part of the story: that this is a collective process.

Dove-Viebahn: The film starts with that admonition to viewers that “this is a work of female imagination.” So, what is it about imagination specifically rather than just collective decision-making or social justice? There are a lot of other ways we could frame this decision that they have to make.

Gardner: I think imagination is a superpower. Because there are no guardrails. I think people underestimate the power of it.

I also think it’s really hard to hold onto it. That colony is all they know. They cannot read and they cannot write, and they are deprived in education. So imagination is genuinely their greatest muscle. That just thrills me. What would happen if people started to be provoked into thinking on ground that feels totally unfamiliar, making requests that they’ve been told never to make? What would that feel like? That feels like an endlessly open field, which dramatically is really thrilling.

That colony is all they know. They cannot read and they cannot write, and they are deprived in education. So imagination is genuinely their greatest muscle. That just thrills me.

Dove-Viebahn: They’ve also been subjected to something that is unimaginable.

Gardner: It’s totally unimaginable. But as Miriam [Toews] says in the beginning of her book, when the women who inspired the novel were waking up bruised and bloodied and assaulted and voicing [what happened to them], they were accused of it being their ‘imagination’ That is so insidious—that someone would use that word and use that ability and use that possibility as an explanation for these assaults.

So at the end of the prologue, Miriam says [her] novel is an act of wild female imagination, almost as a reclamation of imagination, as an ability for the women. I think the movie is, hopefully, the next iteration of that gesture.

Dove-Viebahn: Imagination is crucial, as you were saying; they have to imagine all the possibilities going forward.

I also wanted to ask about how the film depicts trauma. I appreciate as a viewer that we don’t actually ever see any of the assaults, but we also have the women and girls responding very differently to their experiences, which is quite striking. How do you see the different ways the women grapple with the aftermath of what happened to them? Why is that important to the film?

Gardner: Because it’s true to life. I think it is so vile that everyone who’s experienced assault should react the same way. It makes no sense. Why would that be true? We’re all different, and every assault is different, and it happens in different lives. It just felt so critical to show not only that everyone has a different response and reaction, but also that you are judged for that response. I think when Mariche [Jessie Buckley] says to Mejal [Michelle McLeod], “We were all attacked, why are you doing it this way?” That judgment feels very real to me. I think it does exist.

If we could put expression to the idea that we’ve been conditioned by the patriarchy and by our systems of law to just expect everyone to react the same way, if we could start to break that in the form of this film, that would be an extraordinary thing and maybe even additive to the ongoing discussion in our culture. What are we going to do about the fact that there’s so much sexual violence?

We never wanted to show the assaults. We knew that from the very beginning. I think we’ve all seen far too many assaults and rapes on film. We had no interest in it. We were never going to do it. But what felt really important was to show that those moments after trauma are completely disembodied and porous and confused. Everyone’s heart-mind is different, right? Your sorting system is going to be your own, and no two sorting systems are going be the same, and you have to protect for the individual experience each and every time. What if we did something so radical, as to assume they were all different? Of course, they’re different.

We never wanted to show the assaults. … But what felt really important was to show that those moments after trauma are completely disembodied and porous and confused. … You have to protect for the individual experience each and every time.

Dove-Viebahn: And I think it goes back to that idea of imagination, right? What are the imagined possibilities?

Gardner: Yeah. I think Mariche starts the movie never in her wildest imagination thinking she would ever leave, or could leave, or could forgive, or didn’t have to forgive. She never entertained the idea [of] what she says towards the end of the movie: “I think forgiveness is often mistaken for permission.” That was an idea that she did not have at the beginning of the movie. So, the possibility that she could have it by the end, that, to me, that’s genuinely thrilling. 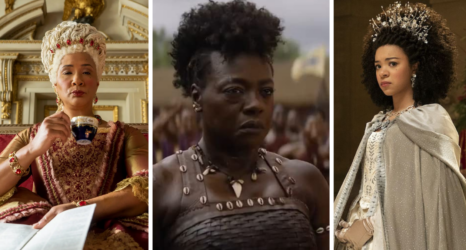 She Wins: Here’s to Powerful Black Women Leaders on Screens