Now is the time to prioritize people, not profits.

Vanessa Drews, founder of Cheesecake Funk in Minnetonka, Minn. (so named by Prince), is feeling the effects of inflation: “The cost of everything has gone up about 30 percent, you know? Cheesecake is pretty much dairy, so a case of butter that used to be $95 is now $160. Don’t even get me started on cream cheese!”

Meanwhile, Kraft Heinz, producers of Philadelphia Cream Cheese, reported record earnings last year, according to Groundwork Collaborative research—one of many companies to use inflation as an excuse to boost profit.

The Federal Reserve has responded to inflation with rapid interest rate increases, meant to tamper down prices, at each of its past seven meetings. They are expected to do the same at their Jan. 31 Open Market Committee gathering. However, these hikes can also increase the risk of recession and unemployment. According to Larry Summers, former director of Pres. Obama’s National Economic Council, unemployment must reach 6 percent before inflation will be in check.

There are other ways to understand inflationary pressures and the economy. “When folks talk about inflation, they’re very quick to the draw, to go straight to the Fed as a solution and to demand as the diagnosis of the problem,” said Rakeen Mabud, chief economist and managing director of policy and research of Groundwork Collaborative.

In this case, however, excess demand isn’t the cause. Instead, Mabud’s blame falls on supply-chain disruptions, corporate profiteering, and the war in Ukraine.

Household names including Colgate-Palmolive and Johnson & Johnson have confirmed that price increases have been higher than cost increases. J&J used windfall to reward investors; meanwhile its price increases on prescription drugs haven’t been re-invested in research for new treatments. Consumer companies have also stated their intention to retain prices, even as supply chain issues help to address costs.

To check this practice, the Economic Policy Institute proposed a temporary excess profits tax, which could balance the pricing power of massive, consolidated corporations. They argue that the pandemic has distorted pricing practices, which are not useful economic signals but just a temporary mismatch between supply and demand.

The Roosevelt Institute suggests broader policy changes to temper corporate power. One focus has been tax policy and antitrust regulations that can reign in corporate consolidation. These include a re-evaluation of economic assumptions that have allowed corporations to grow, unchecked. As a result, mergers and acquisitions have been routinely approved, leading to outsized corporate power—and related price boosts.

The Fed’s aggressive rate hikes have barely touched inflation to date, but they could drive a downturn. Those who are most hurt by inflation, along with rising interest rates, will be the workers still struggling to recover from COVID shutdowns and job losses.

Women leave the workforce to care for a child or another family member in far greater numbers than men and are more likely to feel a negative impact on career advancement.

As CEO of WomenVenture, LeeAnn Rasachak sees the impact on her clients: women business owners. The challenges they already face—especially people of color and new Americans—include access to credit and knowledge about how to legally register their businesses. “And that’s before a recession,” she said.

She also worries about the impact of a potential recession on the donors and public partners who fund their work.

Caregiving is a key area of potential government investment that could help women. Their needs are often put last, after childcare and elder care, said Rasachak.

Women leave the workforce to care for a child or another family member in far greater numbers than men and are more likely to feel a negative impact on career advancement. COVID-19 exacerbated these trends. This so-called “caring crisis” often falls disproportionately on lower income women, who cannot afford childcare outside of the home. This can have a clear effect on lifetime earnings.

WomenVenture is part of a Minnesota collaborative seeking to address childcare shortages, including with a request for funding from the Minnesota state legislature.

Federal level investments could have an even greater impact in caregiving, as well as healthcare, according to Groundwork.

Economic coverage tends to ignore such alternative approaches to economic theory and policy, returning to the same sources again and again. Wealthy white men like Summers, Elon Musk, Jeff Bezos and Jamie Dimon predict a recession, and their words are repeated across global news sites.

The belief that the Federal Reserve should prioritize defeating inflation above all else is related to this orthodoxy. In the past, this has preserved investor assets at the expense of full employment.

The economy is already fragile after a global pandemic; now is the time to prioritize people.

Diane L. Cormany is an assistant professor of media and journalism at the University of Minnesota. 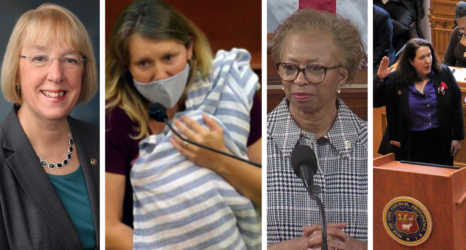