Depp accomplished the very thing women throughout the ages have been baselessly accused of: leveraging victimhood to gain status.

By 2018, Johnny Depp was bordering on irrelevancy.

He was still famous, but that fame was mostly residual from his heyday as a ’90s teen idol and the early-aughts blockbuster Pirates of the Caribbean. By the mid-2010s, Depp’s IMDb page saw far more flops than hits, to the point that Variety deemed him a “fallen movie star.” Between multimillion-dollar lawsuits, reported misbehavior on set, substance abuse and an acrimonious divorce, it was hard to avoid the truth, as summed up in The Guardian: “It has been a long time now since Depp was cool.”

By Depp’s account, any fall from grace he experienced could be attributed to his ex-wife Amber Heard’s 2018 op-ed in The Washington Post referring to herself as a “public figure representing domestic abuse,” opaquely referencing her allegation that Depp had abused her during their marriage (though never mentioning him by name). Such was the basis of Depp’s lawsuit accusing Heard of defamation, which conveniently avoided previous testimony that he had already been edged out of his role in Pirates before the op-ed was even published.

A jury in Virginia, against overwhelming evidence to the contrary, sided with Depp. He gained a tremendous fandom as the trial unfolded; post-verdict, his star rose, as he became the first man ever to star in Rihanna’s Savage X Fenty runway show and signed a new multimillion-dollar deal with Dior Homme, which quietly stood by a prior contract before the verdict was announced.

No longer a has-been, Depp could be back on his way to a box-office draw. The irony of that outcome is that Depp accomplished the very thing women have been baselessly accused of attempting since time immemorial: leveraging victimhood to gain status.

Since the #MeToo Movement took off in the fall of 2017, there have been (roughly) two tracks for men accused of various degrees of abuse or toxicity against women.

Depp refused to follow either playbook. Instead, he took control of the narrative, transforming the allegations against him to reshape his reputation not as victimizer but as victim, resuscitating his career along the way.

By the time he sued his ex-wife, Depp was not particularly relevant to the public writ large. In one 2016 poll, 35 percent of moviegoers reported buying tickets to a Depp-led movie because Depp was in it, down from 51 percent six years prior. Depp had been steadily falling out of the cultural zeitgeist, and via the spectacle of a televised trial—which his team pushed for—he used the alleged abuse of his ex-wife to gain entry back into it. Certainly, when he allegedly raped Heard with a glass bottle or texted his friend that he wanted to have sex with Heard’s “burnt corpse,” he was not factoring in how those actions could nurture his Hollywood comeback. But after Heard’s allegations became public, a defamation trial presented an opportunity not only for Depp to clear his name, but also to commodify it again. Humiliating his ex-wife morphed into a tool to achieve new heights of success.

Unlike other accused famous men, Depp’s redemption was not simply allowed for with the passage of time or the promotion of new content (think: Chris Brown); it was boosted by the accusations made against him. The hashtag #justiceforjohnnydepp achieved a whopping 6 billion views on TikTok during the trial, compared with a measly 21 million for #justiceforamberheard—a practically unheard-of level of free publicity. Depp became a cause célèbre, against every belief that an accusation can ruin a man’s career.

A defamation trial presented an opportunity not only for Depp to clear his name, but also to commodify it again. Humiliating his ex-wife morphed into a tool to achieve new heights of success.

Perhaps all that fanfare formed because those who were skeptical of #MeToo, who feared the pendulum had swung too far, were hungry for a socially acceptable example of #MeToo’s overcorrections, which Depp’s favorable verdict provided for them. Or maybe the fanfare came from an even more depraved place: a desire to see someone fight and destroy their accuser and set the scales back to their original posture. Men—and women—wanted a punching bag, and Heard became a safe one to hit.

The backlash to #MeToo greatly overestimates how much it has changed the social landscape. No woman who has been vindicated as a victim of abuse in court has ever seen a resurgence in popularity akin to that of Depp. Depp cast himself as a victim and emerged a victor — and he would be neither of those things if he hadn’t been accused of being an abuser in the first place.

Men—and women—wanted a punching bag, and Heard became a safe one to hit.

In December, Heard announced that she would no longer be moving forward with her appeal of the jury verdict because, she “cannot afford to risk an impossible bill—one that is not just financial, but also psychological, physical and emotional.”

Others have noted the legal path Depp has paved for his fellow abusers—suing their alleged victims into silence—a playbook Depp’s close friend, rock musician Marilyn Manson, is set to follow. But Depp has also paved a new path for accused men in search of cultural capital. He did not just deny the credible allegations against him; he weaponized them. He was not just quietly protected by the industry; he was welcomed back with open arms.

Depp’s comeback brings to light a distressing truth: that five and a half years after #MeToo brought a dose of optimism to accusers, somehow being accused can be a boon, and not a hindrance, to abusers.

Danielle Bernstein is a lawyer and writer. 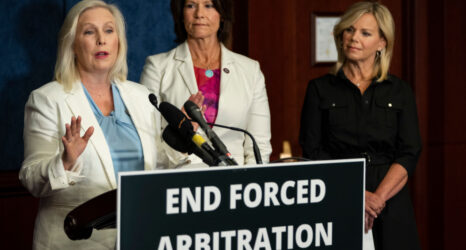