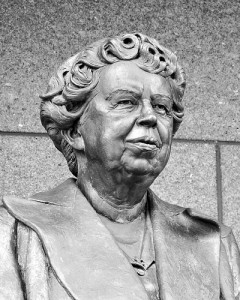 March 13, 1961: Former First Lady Eleanor Roosevelt called on President John F. Kennedy at the White House earlier today and gave him a three-page list of women he should consider for top jobs in his new Administration. Thus far only nine of his 240 appointments have been to women, and none have been chosen for Cabinet-rank or high policy-level posts.

Roosevelt and Kennedy held an extended discussion, lasting half an hour. When asked if Kennedy had failed to appoint enough women, she diplomatically answered : “Some people feel that way.”

One of those who has expressed that view is Emma Guffey Miller, Democratic National Committee member since 1932, who last month wrote to the President saying:

It is a grievous disappointment to the women leaders and ardent workers that so few women have been named to worthwhile positions.

Roosevelt then speculated that the reason might simply be that the President didn’t have a list of the many qualified women who could serve, and that sometimes men need to be reminded that there are so many able women. At a news conference, she revealed that President Franklin D. Roosevelt had such a list of women, and that it was supplied by an official of the National Education Association.

Eleanor Roosevelt is one of President Kennedy’s nine women appointees since he took office a little over seven weeks ago, on January 20. She has been reappointed a member of the U.S. delegation to the United Nations. Two other women have been appointed to U.N. posts as well: Marietta Tree to its Human Rights Commission and Gladys Avery Tillett to the Status of Women Commission.

FOLLOW-UP : During his 34 months in office, President Kennedy never appointed a woman to his Cabinet, but did appoint 10 women to positions that required Senate confirmation–less in number but proportionally more than the 14 women President Dwight D. Eisenhower appointed during his 8 years in office or the 15 appointed by President Harry S. Truman in just under 8 years.

On Dec. 14, 1961, Kennedy established the President’s Commission on the Status of Women and appointed Eleanor Roosevelt to head it. This was a major advance for women’s rights and one of the principal events that would spark the “second wave” of feminism later in the decade.

Also, on July 24, 1962, Kennedy ordered an end to gender bias in Federal job hiring, overturning an opinion by Attorney General Homer S. Cummings in 1934 that gave agency heads the right to limit the filling of any Federal job to one sex or the other. On June 10, 1963, Kennedy signed an Equal Pay Bill covering 27.5 million workers, ending what he called the “unconscionable” practice of paying female employees less than male employees for the same job.

In April of 1963, Esther Peterson put the  president’s record in perspective, noting that he had appointed 81 women to “top-substantial” jobs and that, at this rate, he would appoint more than 240 over an eight-year term–many more than President Eisenhower’s 175 during his eight years. Unfortunately, we’ll never know whether her prediction would have been fulfilled.

Photo of sculpture of Eleanor Roosevelt from FDR Memorial in Washington, D.C., by Flickr user Tony the Misfit, under license from Creative Commons 2.0