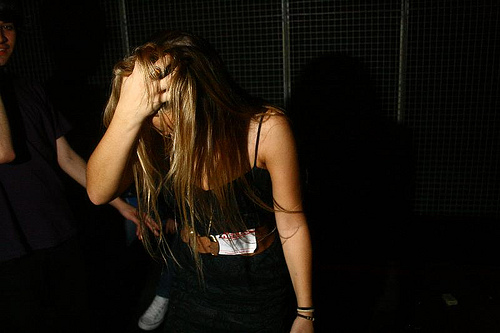 I realized I was a feminist the first time I gave myself permission to be angry with men. My first boyfriend in high school spent a lot of time undermining me in ways that felt like love. He’d tell me I was pretty but not sexy, and then have sex with me. He’d tell me I was smart, but then laugh with his brothers at how I was “ditzy.” He’d look deep into my eyes and tell me the world was ours, and how much he loved me, then tell me I was being crazy when I’d call him more than he liked, or when I’d ask for anything at all. He gave me what he wanted to give me when he wanted to give it to me, and I got to tell myself over and over again that it was what being in love was like.

That guy broke my heart when he broke up with me, and I felt like I lost my whole world. He made me feel like my world wasn’t any bigger than him and that any attempts to make it so were a result of me being “crazy.” After that I gravitated towards any guy who made me feel validated for a few minutes. I wanted to be friends with guys only—I told myself that women were catty and shallow, and that I just got along better with guys. Looking back on that time, I was desperately unhappy and also desperate to be someone who mattered. And the only people I knew who mattered were men.

I could keep that face on until I couldn’t. And that’s when the shortfalls of these guys became painfully apparent. When I missed my first boyfriend so much, I cried during sex with a one night stand and the guy asked if I was OK—and when I said yes, he kept going while I kept crying. When a guy cheated on his girlfriend with me and—nevermind that I was drunk and he was four years older and it was my first week of college—she stayed in a relationship with him but made sure everyone we knew heard about what an evil, dirty, boyfriend-stealing slut I was. When I was too drunk to drive home and asked a male acquaintance to drive me, and we had sex that I don’t fully remember—but he told everyone. And this stuff happened again and again, until it culminated in a night when at a fraternity party, someone grabbed a microphone and asked if anyone wanted their turn at “super sloppy seventeenths” with me.

I dropped out of school then. I felt so worthless I wanted to die. Everyone had figured it out: I was weak, worthless, stupid, and worst of all, a total whore. And after I hit rock-bottom I started to wonder why. Why was it that sex meant that something had been taken away from me and given to some guy? Why was it that guys could shamelessly talk about their sex lives, but I was supposed to be ashamed of mine? Where exactly did this slut label that was breaking my heart come from?

And then the first guy came back. After another painfully draining relationship with him, I got the opportunity to tell him to go fuck himself, to get his things out of the house and leave me to my life. I finally started living for myself. And I realized that straight white men are given power, but the rest of us have to find ours. That made me so angry and so determined at the same time, and something inside me fundamentally changed: I stopped accepting things for what they are and started asking questions about why they are that way. This changed my career trajectory in an insanely positive way. It changed how I relate to men, which led to a fantastic, egalitarian relationship with a man I plan to marry (I’m the one who proposed). And perhaps most importantly, it led to some deeply rewarding friendships with other women. whom I stopped viewing as the enemy in my quest for male validation and started to see as fellow survivors of the patriarchy.

I found feminism like some people find religion. It changed my life and it made me whole.

Genevieve Dempre never quite recovered from her teen years, so she spends most of her time writing about how sexism affects early dating experiences and peer relationships. She also enjoys wine, horseback riding, her Sweet Valley High collection, and wine. She maintains the tumblr blogs “When I Knew” and “Sexist Culture”. You can also find her over at Fark.com, sometimes working, but usually arguing about sexism in pop culture.