For years, child survivors of sexual abuse have been blocked from suing their perpetrators for damages by laws requiring these lawsuits be filed within a short period of time. In New York, survivors had to file by their 21st birthdays.

But in January—after years of fierce opposition from the Catholic Church, insurance companies and the former Republican-led state Senate—the New York State Assembly passed the Child Victims Act, extending the time survivors have to file civil suits against perpetrators until they turn 55 years old. The law opens up a one-year “lookback window,” allowing survivors to file civil actions against perpetrators no matter how long ago the abuse occurred.

After the law went into effect on Wednesday, the floodgates opened to lawsuits against priests, boy scout leaders, camp counselors, teachers, coaches, doctors—and the institutions that tolerate their abusive behavior. Some sued family members.

By noon, survivors had filed 385 lawsuits against perpetrators and their facilitators. The vast majority of the suits were against Catholic priests, Catholic dioceses and parishes where the abuse occurred. It’s likely that thousands of suits will be filed in the coming months and years.

Epstein survivor Jennifer Araoz filed one of the first suits under the new law against the Epstein estate, his longtime associate Ghislaine Maxwell and three unnamed household staff members. Araoz alleged that Epstein began sexually abusing her in 2001 when she was 14 years old, and that he raped her when she was 15.

In addition to easing harsh restrictions regarding civil cases, the Child Victims Act also extends the time period for criminal child sex abuse cases. Before the new law, there was no statute of limitations for the most serious sexual crimes against children, but mid- and lower-level felonies could only be charged until the victim was 23. The new law expands the time the state may prosecute until the victims is 28.

For survivors, there are several benefits to filing a civil suit over criminal prosecution. In a criminal case, the government holds the most power. The goal is to hold the defendant accountable to the state, the burden of proof is high—“beyond a reasonable doubt”—and the defendant is presumed to be innocent.

In a civil lawsuit, the survivor initiates and controls the case, and the goal is to hold the defendant accountable to the survivor. The burden of proof is lower, and there’s no presumption of innocence.

But most important, the outcomes are different. In a criminal case, the focus is punishing the defendant: namely, jail or probation. In a civil case, the focus is compensation of the survivor for the harm she has suffered: money for medical and therapy expenses, psychological damage, damage to relationships and lost wages. Courts sometimes also order punitive damages—money awarded to the survivor to punish the perpetrator. Civil suits have been an effective tactic used by child sex trafficking survivors, as documented in Kate Nace Day’s film A Civil Remedy.

But short statutes of limitations have always been a problem for survivors wanting to bring civil lawsuits—especially for people sexually abused as children. Child sexual abuse is a particularly traumatic experience, and it can take years to find the courage and strength to confront an abuser. This is why survivors and their advocates have been pushing for extended statute of limitations for years—in spite of stiff resistance from defense attorneys, perpetrators and the institutions that support them, like the Catholic Church.

One such New York survivor, Kat Sullivan, made headlines last year with three billboards criticizing the New York legislators for failing to pass the Child Victims Act. In the 1990s, Sullivan was sexually abused and raped by a teacher when she was a student at the Emma Willard School in Troy, New York. Inspired by the movie Three Billboards Outside Ebbing, Missouri, and using her settlement money from Emma Willard School, Sullivan rented the billboards: one in Albany, near the Emma Willard School; one in Fairfield, Connecticut, near a school where the perpetrator later taught; and the final one in Springfield, Massachusetts, close to the town in which he lives today. The billboards read “My rapist is protected by New York State Law. I am Not. NEITHER ARE YOU. NEITHER ARE YOUR CHILDREN.”

Sullivan also hired a pilot to fly over the State Capitol with a plane trailing a sign supporting the Child Victims Act.

Last November, Democrats finally won control of the Senate and the Assembly quickly passed the bill, which Governor Cuomo promptly signed—although the state is now threatening to fine Sullivan for not registering as a lobbyist.

Many other states have passed or are considering passing laws like New York’s. The Pennsylvania grand jury report on Catholic abuse last year inspired many states to extend their statute of limitations. The Rape and Incest National Network maintains a state-by-state guide on statutes of limitations for sex crimes.

“For years I felt crushed by the power imbalance between Epstein, with his enablers, and me,” Araoz wrote, describing how a civil suit can empower a victim.

“The Child Victims Act finally offers a counterweight. I hope more states pass similar laws so that more survivors who endured abuse, assault and rape as a child can know what wresting back their power feels like.” 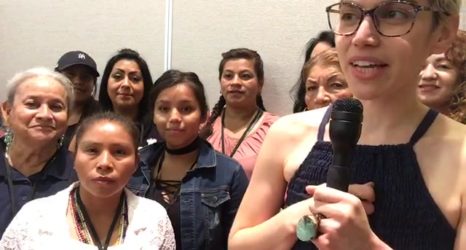