Justice is in Reach When Indigenous Women Speak Our Truth - Ms. Magazine
Skip to content

When my daughter, Rhia Danae Almeida, was seven years old, she was sexually assaulted and murdered.

This horror happened as she went to visit her friend a few blocks away. Her friend was not home, but his older brother was. That day, in June 2009, Rhia’s life ended—and mine changed forever. I was silenced by grief for almost nine years. It wasn’t until over a year ago that I decided I would no longer be a victim with no voice, and that my daughter’s death would not be forgotten. Rhia’s assailant was caught, convicted and, four years later, sentenced to life without parole, but I felt an urgency to speak on behalf of other victims who suffer similar fates.

My story is unique compared to many cases of murdered and missing indigenous women and girls (MMIWG), because the crime occurred off the reservation. Because there were additional investigative, counseling and other resources available, we were able to see a conviction and gain some closure. Many families, however, suffer for years in silence, left without answers. For women killed or abused on a reservation, especially by non-tribal members, under-resourced departments and the historic lack of investigative authority for tribal police complicates jurisdictional matters and undermines inter-agency coordination to investigate cases. Even basic data regarding the number of cases has been difficult to confirm.

Despite significant public records deficiencies, the Urban Indian Health Institute’s (UIHI) recent study identified 506 unique cases of MMIWG across 71 cities nationwide. The report’s authors believe this is a conservative estimate, given that fully two-thirds of public records pertained to cases occurring between 2010-2018.

To put data inconsistencies into perspective, 5,712 reports of missing American Indian and Alaskan Native women and girls were made to the National Crime Information Center in 2016. Of those, only 116 were logged in the Department of Justice’s missing persons database. Through monitoring news reports and speaking directly with families and advocacy organizations, the UIHI identified 153 cases of MMIWG that don’t exist in any law enforcement records.

Thankfully, there is a growing movement of indigenous leaders—led by native women from the First Nations in Ottawa to the first-ever Native American Presidential Forum—building networks of solidarity across tribal communities and using our shared unified power to expand awareness and pass reforms.

In 2013, the reauthorization of the Violence Against Women Act (VAWA) in Congress also expanded authority for tribal police to investigate and prosecute some cases of domestic violence perpetrated by non-tribal members, a remedy that responds to the fully 97 percent of native women who reported violence at the hands of a non-tribal member. Rather than renew protections against violence and strengthen tribal government’s ability to protect its people, however, VAWA was held hostage and expired during the last government shutdown. While the House passed reauthorization in April, the Senate has yet to act.

The journey to seek justice in these cases—to find those missing and hold offenders accountable—will require tribal, local, state and federal agencies to work together. In my community, we are organizing to interrupt cycles of trauma and working for reforms. We proved to ourselves with the creation of Arizona’s task force that when we speak our truth, justice is in reach.  Many victims, however, still feel the same as I did when I felt my words were not worthy of being heard.

This is why I speak my truth. Our voices deserve to be heard. It’s time we start to heal from our pain.

Elayne Gregg is Tohono O'odham, Akimel O'odham and Inupiaq, a survivor of her daughter Rhia Danae Almeida and a member of Indivisible Tohono. 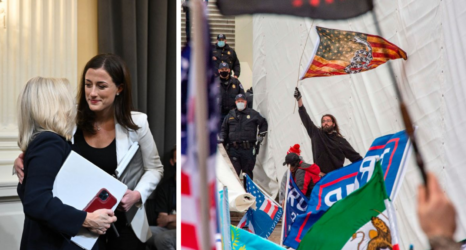