As a Woman Researcher, I Experienced the Harassment and Silencing of the Women Soldiers I Interviewed - Ms. Magazine
Skip to content

How can the U.N. Security Council stand by its call to increase the numbers of women peacekeepers they are deploying, when they can’t keep them safe?

Last month, the #MilitaryMeToo movement erupted in Ireland with the broadcasting of the “Women of Honour” radio documentary. The nation listened as story after story was told by a group of women who experienced sexual assault, harassment and bullying in the Irish Defence Forces. I cried as I listened to these courageous women recount their trauma and it reminded me of some of my own experiences whilst researching my Ph.D thesis.

From 2006-2008, I conducted a series of interviews with 30 Irish peacekeepers. Some of these took place in different barracks in Ireland, and others took place in Kosovo where I was observing the NATO-led Kosovo Force peacekeeping mission. I was curious to know what the barriers were to women’s deployment on missions.

This was in response to United Nations Security Council Resolution 1325, which along with nine other resolutions, has become known as the Women, Peace and Security (WPS agenda). It calls for U.N. member states to ensure women’s equal participation in all aspects of peace and security.

This matters because women are disproportionately affected by conflict. Gender roles and discriminatory norms make women more vulnerable to conflict-related sexual violence, which leaves women traumatized and erodes the fabric of communities. Gender inequities in accessing resources create opportunities for militias, human traffickers and peacekeepers to exploit women during and after conflict.

I wanted to understand how the Irish Defence Forces was responding to the WPS agenda. I was particularly interested to know if women peacekeepers were being tasked with communicating directly with civilian women whilst on patrols and at checkpoints and borders, specifically with the intention of gathering information about their security needs and then feeding it up through the chain of command.

However, early on in my study, I discovered that few women officers, at that time, came into direct contact with civilian women as part of their formal peacekeeping roles. Most were in administrative or logistical jobs within the camp, behind barbed wire fencing. I wanted to understand why.

I learned that circulating among the male soldiers were two dominant discourses.  The first was the idea that women soldiers needed to be protected by men. The men I spoke with talked about how men from other militaries wouldn’t treat women with respect as they wouldn’t consider them equals, that local men would be insulted if a woman communicated with them, and that women might be sexually assaulted by men from other militaries, militias or cultures.

The second dominant discourse was that women’s sexualized bodies disrupt missions. I was told that men would chase after women, creating jealousy and resentment amongst men, and that these women would be the cause of men’s infidelity labeling them as “home wreckers.” The message was that the presence of women could break down the overall discipline of a mission.

Circulating among the male soldiers were two dominant discourses. The first was the idea that women soldiers needed to be protected by men. The second was that women’s sexualized bodies disrupt missions.

These are some of the cultural, not formal, attitudes that can create barriers to women’s deployment to missions. Ideas like these within militaries position women as “other” or “different” and can influence decisions about the roles, jobs and missions women are able to access.

However, when I spoke directly with the women officers about the problems they experienced on a peacekeeping mission, another story emerged.

While the focus of my study was not specifically on sexual assault and harassment, incidents were recounted to me by some of the women I interviewed. Besides the many daily micro-aggressions the women shared with me, such as sexist jokes and ‘slagging,’ women also reported being physically and sexually assaulted as well as being sexually harassed and bullied by their male peers or higher-ranking officers. None of the women formally reported these incidents for fear of reprisals, such as being ostracized or their promotion opportunities being hindered.

As it turns out, I experienced some of this culture firsthand as a woman researcher.

During my research trip to Kosovo, a soldier followed me to the bathroom where he exposed himself to me. On another occasion, a senior male officer attempted to play ‘footsie’ with me under the table while I presented my research findings to him. Though two standalone and very different incidents, they reveal the depth of sexist attitudes within the military culture. Both men acted without fear of repercussions.

A soldier followed me to the bathroom where he exposed himself to me. A senior male officer attempted to play ‘footsie’ with me under the table while I presented my research findings. Both men acted without fear of repercussions.

Like the women officers I interviewed, I chose not to say anything at the time for fear that it would negatively impact my data gathering. I now realize that was a mistake.

I then faced another dilemma with the data I had gathered.

For permission to conduct my research, I had to sign a document that gave the Irish Defence Forces control over the qualitative data from my interviews. If they didn’t like my content, they could remove it. From the outset, this created a deeply unequal power relationship between me and the Irish military.

At the suggestion of a colleague, I sent a draft version of my study to a senior male officer—described to me as a rational intellect—for review. He was allegedly enraged by the contents of my chapter on sexual harassment and bullying. His reaction suggested the Irish Defence Forces might not approve my data. More importantly, because a relatively small number of women had participated in my study, there was a risk that their identities would become known.

Because of my concerns about the safety of the women participants, I deleted the detailed chapter in my thesis and instead wrote a statement outlining that incidents of abuse had been reported to me and that the Irish Defence Forces was responsible for creating a safe, just environment within which women can report abuse and harassment without fear of reprisals.

Their response was silence, a highly effective tactic used to maintain power and control and, in this case, maintain a culture of misogyny.

When I later presented my research at a high-level public event, a woman officer dramatically dismissed my research findings in front of several senior male officers who were present. I was devastated—not least because this same officer told me in private that she agreed with every word in my thesis. It was an important reminder that women within misogynistic institutions often absorb those value systems and actively support them.

Now, the silence has been broken.

I recently gave an interview to the journalist who made the “Women of Honour” documentary recounting my experiences and those of the women who spoke to me. The interview was broadcast on national radio and resulted in more politicians calling for the creation of an independent inquiry into the allegations of sexual assault and harassment of the women in the Irish Defence Forces. Since then, more women have come forward with their stories, and the Minister for Defence has agreed to set up a wholly independent inquiry. At last, women soldiers are having their voices heard.

My hope is that this will lead to change within the Irish Defence Forces, as well as positively impact women’s safety within and without militaries worldwide.

Sexual assault and harassment in the military is not new and is not unique to Ireland. In the U.S. military, nearly one in four women report being sexually assaulted. In the Canadian Defence Forces, there have been 700 cases of sexual assault reported since 2016. These incidents leave women deeply traumatized, sometimes suicidal, engaged in protracted legal battles for justice, and forced to leave militaries—which places them in precarious unemployment situations.

If we are to increase the number of women peacekeepers to 15 percent by 2028, countries must first tackle misogyny within their own cultures.

Currently, women make up only 5.4 percent of all U.N. military peacekeepers. Due to efforts made by the WPS agenda that number has crept up from the abysmally low 1 percent in 2000. If we are to increase the number of women peacekeepers to 15 percent by 2028, as has been called for by the U.N. Security Council, troop-contributing countries must first tackle misogyny within their own cultures. This will not only protect the women soldiers in their own ranks, but also the women and girls they are trying to help in conflict zones.

Ireland can take the lead in advocating on behalf of women peacekeepers and tackling misogynistic military cultures. As a current member of the U.N. Security Council (2021-2022), and with the WPS agenda as one of its flagship projects, the Irish government is uniquely poised to make an impact on this issue. Senior diplomats, such as U.N. Representative Geraldine Byrne Nason, have an opportunity to demonstrate Ireland’s leadership role by admitting to the problems within the culture of the Irish Defence Forces, and sharing best practices on how they are responding to those issues.

The brave women soldiers who have come forward to publicly share their stories, and to call for change, deserve nothing less.

Dr. Shirley Graham is the Director of the Gender Equality Initiative in International Affairs (GEIA) which convenes the GW/Elliott School’s curriculum, research and engagement in the policy and practice of promoting and achieving gender equality globally. She is also a member of the U.S. Civil Society Working Group on Women, Peace & Security (CSWG) a coalition of experts serving to inform and educate U.S. Congress, the Administration and civil society on Women, Peace & Security (WPS) thematic areas. She is currently conducting research into the role of the U.S. Military Gender Advisors. 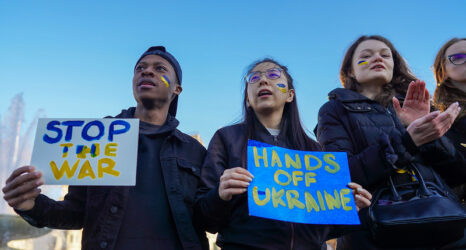