The Women, Peace and Security (WPS) Index from Georgetown University provides a simple ranking and comprehensive picture of women’s inclusion, access to justice and security in 170 countries.

How do we measure women’s wellbeing?

The WPS Index tracks 11 indicators—ranging from women’s employment to intimate partner violence to sexist attitudes—from publicly available data sources, like the World Bank, U.N. Women and Gallup. All of these metrics can be traced to goals and indicators that countries have agreed to in context of the sustainable development goals. Countries are scored between 0 and 1, where higher is better.

Where does your country rank?

Norway is the top performer on the third edition of the WPS Index, scoring .922. All five Nordic countries rank among the top seven; this high standing is associated with progressive public policies. However, no country has a perfect score.

As Mona Juul, Norwegian ambassador to the U.N., said at the WPS Index launch event:

“While the Nordic countries feature at the top of the #WPSindex, we are not perfect. In every society, there are those who experience unequal treatment and exclusion. It is imperative that we recognize this, it helps us to look for ways to address gaps.”

At the other end of the spectrum, 10 of the bottom 12 countries are fragile states. The range of performance here is much wider than at the top, with bottom-ranked Afghanistan performing 51 percent worse on the index than Somalia, which is ranked 12th from the bottom. In these low-scoring countries, women on average have not completed more than primary school (with the exception of Palestine), at least 16 percent of women have suffered violence at the hands of  their intimate partner in the past year, and no more than one woman in three has access to her own bank account.

The range of scores on the 2021 WPS Index is vast, with Norway at the top scoring more than three times better than Afghanistan at the bottom.  This range is much wider than in our first edition of the WPS Index in 2017, where the score of the top performer was about two times better than that of the worst performer. The widening gap reflects global trends in wealth and income inequality, which the COVID pandemic threatens to further amplify.

“More people are food insecure, pushed into extreme poverty, and the number of displaced people continues to rise. In many cases, women and girls have been the hardest hit [by the pandemic].”

There is some good news…

Since the inaugural WPS Index was published in 2017, women’s overall status has risen, with the average index score up by about 9 percent. Indeed, 90 countries improved their score by at least 5 percent.

However, the global rate of progress for women has slowed by more than half. The global average rose about seven percent between 2017 and 2019 but by only about three percent between 2019 and 2021.  And this slowdown occurred even without full accounting of the impacts of the pandemic—for example we know that rates of intimate partner violence have worsened, but comprehensive new data on this is lacking.

The Democratic Republic of the Congo is among the top score improvers since 2017, rising 13 percent, while the Central African Republic’s score rose 22 percent, moving the country out of the bottom dozen. Improvement in the Democratic Republic of the Congo came mostly in the inclusion dimension, as the share of women with financial accounts almost tripled, to 24 percent, and women also had increased cell phone use and parliamentary representation. In the Central African Republic, improvements were attained in the security dimension, as organized violence fell significantly and perceptions of community safety rose six percentage points. However, there is still a long way to go in regard to women’s rights in Sub-Saharan African countries, but these improvements are still noteworthy.

One indicator which improved around the world is women’s cell phone use, which rose in 115 countries, bumping the world average up from 78 to 85 percent between 2016 and 2020.

Sub-Saharan Africa saw the largest regional jump, from 64 to 81 percent; in Ethiopia, women’s cell phone use more than doubled, from 43 to 98 percent.  Since 2017, women’s representation in parliament has also increased globally, from 20 to 26 percent—most markedly in Central and Eastern Europe and Central Asia and in Latin America and the Caribbean, with a rise in the latter region from 24 to 33 percent.

While the global improvements are welcome, the worsening index scores for several countries underscore persistent challenges. Since 2017, Afghanistan’s score has deteriorated 28 percent, driven mostly by worsening rates of organized violence and perceptions of community safety. The recent rise of the Taliban has exacerbated the deterioration and undermined women’s status. Scores also worsened in absolute terms for Haiti, Namibia and Yemen, with especially marked declines in community safety (except Yemen) and rising rates of organized violence (except Namibia).

The Georgetown Institute for Women, Peace and Security (GIWPS) website offers access to the data used to construct the Index. For each country, you can see the national index score and ranking, compare with the scores of others, and explore performance on component indicators.

GIWPS’shttps://msmagazine.com/2021/12/05/tracking-the-backlash-feminist-investigative-journalism-reproductive-rights-tatev-hovhannisyan/ aim is to inform and inspire, and to provide a tool to help to hold governments to account for their global commitments to gender equality and leaving no one behind.

About Georgetown Institute for Women, Peace and Security 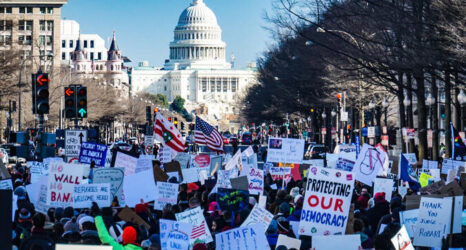 Is Violence the Last Gasp of the Patriarchy?
In “My So-Called Selfish Life,” Therese Shechter Tackles What It Means To Be Child-Free
On Roe Day, Women in Congress Speak Out on Abortion Rights: “We Are Witnessing an All-Out Assault on Reproductive Freedom”