Polaris, the North Star, is so named because it always points toward true north. Underground Railroad conductor Harriet Tubman used the North Star to liberate herself—then went South over and over again, using it to liberate both family and strangers.

Toward the end of his astonishing debut novel of Black queer life during slavery, The Prophets,  Robert Jones, Jr.’s “Prophets” declare: “The cosmos is on your side.” At this moment in the text, the reader is called to imagine that our enslaved ancestors were in fact watched over; we are called to remember the stories many of us were raised on, about enslaved folk who followed the Drinking Gourd—the stellar constellation more popularly known as the Big Dipper—to freedom. The Drinking Gourd is notable because of its easy-to-identify shape, which simplifies finding Polaris, the North Star, so named because it always points toward true north.

Polaris was thus a natural compass, especially for enslaved people who were self-liberating, including Underground Railroad conductor Harriet Tubman. The story appears repeatedly throughout popular representations of Tubman: She used the North Star to liberate herself. Then, like a superhero, she went South over and over again, using the North Star to liberate both family and strangers.

I cannot imagine a more noble use of astronomical knowledge than to liberate people from the violent horror of chattel slavery. Yet, finding Harriet Tubman, astronomer, in the archives is not a straightforward endeavor. There is currently one known instance of this story being recorded during Tubman’s lifetime. In Sarah Hopkins Bradford’s 1869 Scenes in the Life of Harriet Tubman, the story is told like this:

“And she started on her journey, ‘not knowing whither she went,’ except that she was going to follow the north star, till it led her to liberty.”

Bradford’s rendering is the source for subsequent biographies of Tubman.

There are substantive reasons to question the overall reliability of Bradford’s book, though different interpreters may disagree about why it is unreliable. The more mundane reason to be skeptical is that Bradford did not truly complete the book (her publisher did), and Tubman was unable to read the claims that were being made about her. We know from Nell Irvin Painter’s scholarship on Sojourner Truth that white interlocutors took liberties with their subjects, often in service of white sensibilities about what these women and their stories “should” sound like. By the time Bradford wrote Tubman’s story, the idea of following the North Star, Polaris, to freedom had entered the popular abolitionist imagination to such an extent that formerly enslaved Frederick Douglass founded an abolitionist newspaper in 1847 called The North Star.

Another argument against Bradford’s rendering of Tubman’s history is rooted in an unwillingness to believe that enslaved folk had the kind of knowledge necessary for scientific thought. To these people, the idea that Tubman could have used astronomy is to project wish fulfillment on a woman who was insufficiently educated. As if enslaved people—who never had any formal education—were not midwives, farmers, builders and chefs who had expertise in aspects of human biology, agriculture, engineering and chemistry.

To survive as an enslaved person also required the equivalent of a Ph.D. in “master psychology,” a skill Tubman possessed when discerning whom to trust and whom not to. Managing and negotiating white people’s emotions in order to make conditions more survivable was part of the labor of slavery.

Considering the claims about Black cosmological knowledge in context, The North Star is but one example of how Polaris entered into Black liberation narratives. In 1928, the Texas Folklore Society published “Foller De Drinkin’ Gou’d,” an African American folk song transcribed by Harris Braley Parks during his travels through the south in the 1910s. As part of the publication, Parks shared the story of Peg Leg Joe, who purportedly traveled from plantation to plantation with the covert purpose of using the song to teach enslaved people how to self-liberate. Notably, the song and story are both collected by a white amateur folklorist, and it is therefore easy to believe that they are merely Black American mythology, an expression of longing for freedom.

As if enslaved people—who never had any formal education—were not midwives, farmers, builders and chefs who had expertise in aspects of human biology, agriculture, engineering and chemistry.

The printed archive is typically white supremacist. By this I mean that what has been saved for posterity skews toward that which is meaningful to what white men, especially those who are propertied, have determined is worth preserving. Our ancestors’ histories are mostly saved as physical descriptors on financial ledgers—what Katherine McKittrick has referred to as “mathematics black life”—leaving Black historians to carefully read between the lines and through silences.

Even so, there were those who insisted on telling their stories in a way that could be exactly saved and reproduced in perpetuity: Olaudah Equiano, Frederick Douglass and Harriet Jacobs are among some of the better-known autobiographers. Among those who wrote their stories is Henry Bibb, who was born into slavery in 1815. When he was about 22 years old, he “walked with bold courage, trusting in the arm of Omnipotence; guided by the unchangeable North Star by night, and inspired by an elevated thought that I was fleeing from a land of slavery and oppression, bidding farewell to handcuffs, whips, thumb-screws and chains.”

The archive may suggest to us that Black oral histories about—and attachment to—a cosmic freedom guide star are more wishful thinking than reality. But Bibb provides first-person evidence that at least one person used Polaris in exactly the manner that has been passed down through generations of Black Americans remembering their multigenerational sojourns through American white supremacy.

Tubman, an extraordinarily skilled soldier for freedom who often had to work at night, would have of course sought out and taken advantage of a resource such as Polaris. Tubman herself reported that during her at least 13 journeys below the Mason-Dixon line to rescue freedom seekers, “I never ran my train off the track and I never lost a passenger.” Only with extensive technical skills, including an intimate familiarity with the land, and an incredible level of persistence could Tubman have had this kind of success rate.

I believe that Harriet Tubman, as a conductor on the Underground Railroad and general expert on the social technology of liberation, understood and used this cosmos that includes Black people and freedom. This knowledge makes her one of the greatest astronomers in American history. For this reason, last year I argued with colleagues, including fellow Black astronomer and physicist Brian Nord, that the next generation NASA space observatory—named for a Kennedy-era leader who is implicated in the Lavender Scare—should be renamed the “Harriet Tubman Space Telescope.”

We were unable to convince NASA, though large swathes of the community have felt compelled to refer to the new observatory, which launched on Christmas 2021, only by its acronym JWST. I am not giving up. There is a great cosmos beyond the horrors of slavery and its wake. We have always been a part of it, and it has always been a part of us. I firmly believe we will one day launch a Harriet Tubman Space Telescope, sending out a memorial to the best of humanity to meet our most glorious cosmos. 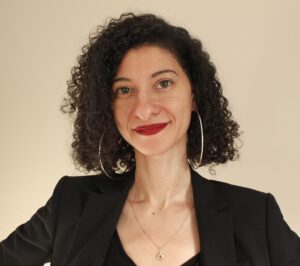 Dr. Chanda Prescod-Weinstein is a theoretical physicist and feminist theorist at the University of New Hampshire and author of The Disordered Cosmos: A Journey into Dark Matter, Spacetime, and Dreams Deferred.