"I'm Speaking": Meet the Feminists Stitching the Country Back Together - Ms. Magazine
Skip to content

In broad clear lines for a rainbow of colors, this woven work of yarn carries a message: We are stronger if we come together.

A hundred years and one day after American women won the right to vote with the ratification the 19th Amendment, Kamala Harris formally won the vice presidential nomination at the 2020 Democratic National Convention.  She would be the first woman and the first of Black and South Asian descent, elected to serve as the vice president of the United States.

In a year when museums and other organizations are honoring women, there was a special and unique way to celebrate Harris in an art form that connects all women: Not in bronze statues, but with her portrait created in vibrant yarn.

Kaye was inspired to use the colors for the mural by the jacket worn by Kamala Harris to the San Fransisco Pride parade in 2019.  The vivid reds and black, shades of green and blue and purple, with orange and yellow—these are what Kaye said were “the colors and her smile that day …. what I used as the inspiration for the sketch.”

“From there the pattern was created,” explained Kaye. “Every participant was encouraged to use yarn from their stash at home. They kindly shared with me photos of yarn colors that matched the color patellate of sketch and I assigned pieces from there.”

The work was brought to life by over 150 crocheters who each crocheted one 24 inch-by-24-inch square in size. Dedicated on International Women’s Day, March 8, the squares stitched together to create one piece, 20 feet by 40 feet.

Crochet art connects through loops to create a strong fabric. The choice of yarn for an outdoor work was specifically acrylic, which absorbs little water and does not fade quickly in the sunshine. In broad clear lines for a rainbow of colors, this woven work of yarn carries a message: We are stronger if we come together.

Crocheters from as far as California and Louisiana came to participate in the installation.  Gutsy Media/Wake Up & Vote, a social impact content studio, having produced 500+ short digital films for the 2020 election, had  partnered with Kaye and filmmaker, Jonna McKone, to document the process. Collecting video diaries from participants across the country, they  joined the crochet team over two days of filming in D.C. as the group stitched the panels together and installed the mural.  The short digital film have been shared online by various national women’s organizations as a celebration of Women’s History Month.

The crocheters have another connection to Harris, who has spoken about her experience crocheting afghans. Most recently she was seen visiting Danielle Romanetti’s very popular yarn store, fibre space in Old Town Alexandria, and leaving with a purchase of yarn.

Kaye has also partnered up with one of the participants, yarn-dyer Sheila Negron Harrison, to create a pattern in a smaller version that people can make from home. The kit captures the beautiful colors of the mural into hand-dyed 100 percent wool yarn, and includes a special crochet hook with a written pattern.

The mural of Kamala Harris is the 7th installation by Love Across the USA.  Some of the other murals celebrating historic women are of Sojourner Truth, Minerva Hamilton Hoyt, Nina Simone, Marion Anderson, Susan B. Anthony and Harriet Tubman.

The mural is currently located outside of the restaurant, Officina, on Maine Avenue at the Wharf in the southwest quadrant of Washington D.C., where it will remain through Memorial Day before being moved to a permanent location.

From events preceding the Civil War to post-civil rights, this wharf has strong connections to both local and national history—in fact, when there, history is literally under one’s feet.

A plaque on Pearl Street notes that here on April 15, 1848,  in one of the most brutal episodes in American history. After a storm at sea, the  abolitionist schooner The Pearl, with 77 Black escapees seeking freedom, was returned to Washington harbor.

Most recently, there was placed a plaque for Thurgood Marshall, a southwest resident who was the first African American appointed to the Supreme Court. Harris has spoken of her admiration for Marshall and was sworn into office with her hand on his Bible.

Now for all to look up and see, the portrait of America’s first woman vice president with her message—clear, simple and sublime—to all: “I’M SPEAKING.”

Take Action on a Harris Priority: The Equal Rights Amendment

“One of the most important actions the Biden and Harris administration can take—one that will affect all areas of women’s and girls’ lives—is ensuring that the Equal Rights Amendment becomes part of the U.S. Constitution,” wrote Ms.’s Carrie Baker.

And Vice President Harris agrees: “Passing the ERA, let’s start there,” she told an audience in Iowa during a campaign event in 2019, when asked what she would do for women in the first 100 days if elected president.

To take action now in support of the ERA, head over to erayes2021.org where you can directly contact your U.S. legislators, share your ERA story, and find an ERA Toolkit with ready-to-post social media images and other advocacy resources. 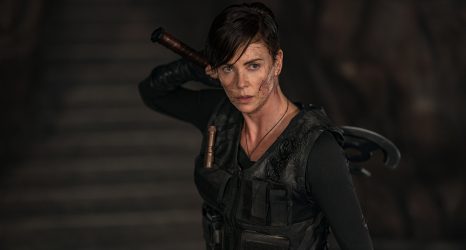 The Old Guard: Revisiting an Exceptional Feminist Action Film on its One-Year Anniversary

The Taliban Further Tightens Its Grip on Afghan Women and Girls: “These Young Women Have Fought for Themselves”
U.S. Health and Human Services to Protect Texas Abortion Patients and Providers: “We Have Your Back,” Says Secretary Xavier Becerra
Student Activists Are Breaking the Silence on Period Poverty