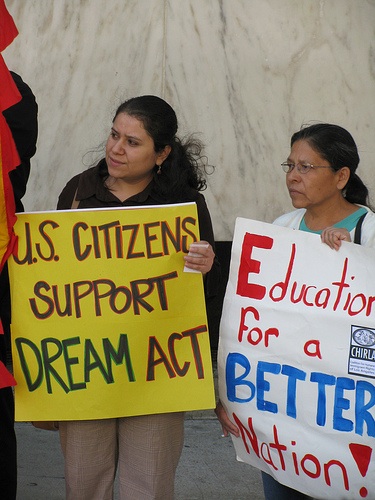 With hope fading that Congress will tackle comprehensive immigration reform before adjourning in October, most immigrant advocates have turned their attention to passing The Development, Relief and Education for Alien Minor’s (DREAM) Act. The DREAM Act would let undocumented young people (who meet certain criteria) enter the military, attend public colleges and apply for federal college funding, dramatically helping their job prospects.

Last week, the National Network to End Violence Against Immigrant Women gave fuel to the DREAM Act with a report on how the act would particularly aid immigrant women and girls:

Undocumented immigrant women in America are often relegated to hourly or low-pay work in the informal sector, such as housekeepers, nannies, farm or sweatshop workers, where their academic potential is squandered. Furthermore, these jobs make no promises of fair wages, health care, retirement and, in many cases, their health and safety. History has shown that improving educational opportunities for girls improves the quality of life of the entire family, especially for the children. Conversely, limiting the prospects for immigrant girls increases the likelihood that they will drop out of school, experience unintended pregnancy as teenagers, or struggle to financially support their children.

According to the report, passage of the DREAM Act would help 57,000 immigrant women, ages 18-34, who have their high school diploma or GED and 436,000 girls under the age of 18 who are still in school but are undocumented.

Passage of the DREAM Act doesn’t just provide the obvious economic benefits for graduates who want to work and are legally prohibited from doing so, but also provides a psychological boost to students in high school and younger who wrestle with the daily dilemma of finding value in doing homework and sitting behind a desk that they know will not benefit them job-wise in the future.

As a result, many of these children drop out of school, adding to the 22 percent dropout rate among Latino students. As it is now, it’s been observed that Latinas are likelier to stay in school, do well and go on to college if they’re given the proper encouragement and support. In fact, more Latinas graduate from college than Latinos.

The DREAM Act would let these young foreign-born, but U.S.-raised, women finally become full participating members of society, rather than easy prey for unscrupulous employers to exploit. It would also help the women from becoming victims of physical or sexual abusers who blackmail the women with their undocumented status by threatening to report them to authorities if they resist their attackers.

A DREAM Act law could restart so many lives that have been put on hold for too long–lives like Alma’s.

It was 1997, and 20-year-old Alma felt compelled to respond to a newspaper column I had written about the dismal state of Latinos and education. She wanted to tell me that she had loved being in school and had been an athlete and student leader in high school. She received good grades and offers of stellar recommendations from her teachers when the time came to apply to different colleges. She wanted to be a sports agent.

“At that moment, my world stopped,” said Alma in her deep Texas twang, when I met with her in a Dallas coffee shop a few days after receiving the e-mail. She told me that it wasn’t long before she lost interest in school and started making excuses to her teachers as to why she changed her mind about applying to colleges. She also became acutely aware of the police and knew that if they discovered her illegal status she would be deported back to a country she didn’t even remember.

“You know what’s really ironic,” said Alma with a dry laugh. “I don’t even speak Spanish. That was the one class I could never get an “A” in.”

Alma resigned herself to doing odd jobs for family members and dreaming of the day when she would be calling the shots for major athletes.

Hopefully, that day isn’t too far off.

Want to help pass the DREAM Act? Sign this “Dream Act Now” petition from America’s Voice, which will be hand-delivered to Congress by immigrant youth on September 20.