Harriet Tubman’s Disability and Why it Matters - Ms. Magazine
Skip to content

Harriet Tubman’s disability has pushed me to interrogate how power and vulnerability can not only co-exist but work together in liberatory ways.

I am a historian and professor of slavery and medicine. I focus primarily on Black women’s experiences as enslaved people and medical patients. Despite nearly two decades reading old books and articles about Black women’s experiences, there are always passages from the 19th century that force me to release my held breath. The following passage about Harriet Tubman’s freedom dreams, in Sarah H. Bradford’s biography about her life, made me pause:

” … before her escape from slavery, she used to dream of flying over fields and towns, and rivers and mountains, looking down upon them ‘like a bird,’ and reaching at last a great fence or sometimes a river, over which she would try to fly, ‘but it ‘peared like I wouldn’t hab de strength, and jes as I was sinkin’ down, dere would be ladies all drest in white ober dere, and dey would put out dere arms and pull me ‘cross.”

This quote reveals a version of Tubman that complicates her identity and worldview as an American icon. Focusing on a recurring dream of freedom while she was enslaved, Tubman spoke of her fatigue, vulnerability and how her liberation was held in the hands of other women. In her dream, when her strength wanes, a band of “ladies” stretched out their arms to protect Tubman from her fall. These women cradled her as she rested, while simultaneously laboring to ensure her freedom. In her dream state, she envisioned women as saviors, as the rescuers of her enslaved body.

Perhaps this recurring vision motivated Tubman to imagine herself as not only a savior of weary laborers but also to serve as a flesh and blood symbol of communal democracy. Although her white memoirist vacillates between the use of her voice and that of Tubman’s—using what was imagined as “Black vernacular” in a rather patronizing tone—her ventriloquism of Tubman nonetheless allows readers to see Tubman as she saw herself: fragile and in need of gentle care.

Most 19th-century writers focused on Tubman’s bravery and strength. Her supporters praised her for her successful solo journeys into the slave-holding South to free dozens of enslaved people. Yet, as an enslaved woman who lived in a patriarchal and anti-Black America, Harriet Tubman’s freedom dream and fugitive activism demonstrated something else. She offered up a version of freedom where a disabled Black woman sat at the center of it, where Black women were liberators, and where liberation was communal and democratic.

Despite this compelling excerpt, most biographies of Tubman do not examine her as a disabled woman. The silence around Tubman’s disability originates from the limiting language 19th-century physicians used to describe her symptoms. They used terms that did not explain the extent of her disability. Yet, Tubman was a woman who spoke freely about the symptoms and pains she experienced due to her injury: painful headaches, disruptive and frightening “fits” and what was then described as “narcolepsy” when she appeared unconscious. She also experienced out-of-body sensations (perhaps reflected in her “fly like a bird” vision) and vivid otherworldly dreams that were hyper-religious and rife with Christian imagery.

Imagine if we were taught that Harriet Tubman was not only a conductor on the Underground Railroad but was a badass, disabled freedom-fighting fugitive, Civil War military veteran, healer and philanthropist.

We owe her the respect to add the adjective “disabled” to Tubman’s list of descriptions when we discuss her identities. More importantly, understanding Harriet Tubman as a “disabled” figure can also help us to see the powerful intersections between disability and strength. Imagine if we were taught that Harriet Tubman was not only a conductor on the Underground Railroad but was a badass, disabled freedom-fighting fugitive, Civil War military veteran, healer, philanthropist and one of the architects of the enduring Black Women’s Club Movement that birthed civic and fraternal organizations for Black women all over the United States.

So, how did Harriet Tubman become disabled? Like many areas of Tubman’s life, there are varying accounts. The story described at the Harriet Tubman Underground Railroad State Park Visitor Center focuses on the accidental nature of her injury. During her adolescent years, Araminta “Minty” Ross, Tubman’s birth name, was ordered to run an errand at a local general store. While there, she observed a Black male teen who had run away from his owner. His white overseer, fast on his heels, entered the general store. The teen and the overseer exchanged words and the white man demanded the diminutive Minty capture the fugitive. Minty ignored the man’s request and did not involve herself in the fracas. In a fit of rage, the overseer threw a two-pound weight at the fugitive.

Unfortunately, the weight struck Minty’s head instead. She nearly died. In limbo between life and death, Minty was sent to her mother Harriet’s home to either live or die. Harriet nursed Minty back to life for months. The injury was transformative because Araminta’s life and body would be forever changed by the overseer’s violence. She suffered lifelong physical pain. In a patently racist and sexist world where she was also enslaved, Araminta had to contend with a disability for which she had to learn and negotiate during her formative years.

Araminta, who later renamed herself Harriet Tubman, was a brilliant thinker and observer. She escaped slavery while in her 20s and remained outside of the institution’s grip throughout the remainder of her life. It was her keen observation of the stars, wildlife and the environment that aided her escapes.

More critically, Harriet Tubman made a nation, which was created for the elevation of white people, men, the elite, the formally educated and the able-bodied, to accommodate her disability. While enslaved, she was able to convince her owner that he could also profit from the earnings she made if he agreed to let her lease herself for paid work. While engaged in fugitive and abolitionist work, Tubman commanded respect from noted abolitionists like William Still, a Black conductor and “station master” of the Underground Railroad, and Frederick Douglass.

Most admirably, Tubman led over 70 enslaved people to freedom from Eastern Shore Maryland to free states and to Canada while suffering from the debilitating symptoms of her brain injury. Further, she was recruited as a scout and spy for Union forces during the Civil War by the country’s most prominent military and political leaders. One wonders how a disabled Black woman gained so much respect across racial lines amongst such seemingly disparate groups. I marvel at how this could have happened. As a scholar of the slave past, I understand how common and pernicious anti-Blackness and misogyny were during this era, but Tubman’s life and reputation seems exceptional in this regard. Or was it?

In the 19th century, there are numerous records and stories that mention people with diverse disabilities who were not institutionalized and shunted away from society. The disabilities these sources describe ranged from infertility (certainly a mark of disability for an enslaved woman), to amputations, visual and aural impairments, mental illnesses, workplace injuries that permanently disabled laborers (remember, young Harriet was injured while working for her owner), and learning challenges. What is most interesting to me is how those around her learned to accommodate Harriet’s differences, her disabilities.

Harriet Tubman created truly sustainable communities where democracy was not only centered, but Black women with disabilities could execute power collectively.

What must it have felt like to be on the run from a plantation, following a petite woman who could not read and was prone to seizures? Why did the enslaved stay the course? What knowledge(s) did they possess about disabled people that Americans in the 20th century did not acknowledge fully until 1990 when the Americans with Disabilities Act was legislated? It seemed the most dispossessed United States residents, those who comprised the 19th century’s rabble, practiced a democracy that should have modeled for the country how to live out its political ideals.

As a result, Harriet Tubman created truly sustainable communities where democracy was not only centered, but Black women with disabilities could execute power collectively. In 1896, while in her 70s, Tubman bought 25 acres of land that would eventually become a home for the Aged. The home crystallized how important the provision of radical care for the most vulnerable, the elderly, was for her.

Because Tubman had spent the majority of her life in service to others, she never became wealthy and suffered financial challenges throughout her life. More amazingly, she accomplished her democratizing work while experiencing debilitating physical pain. During a trip to Boston in 1898, Harriet willingly underwent brain surgery without anesthesia, to reduce the painful headaches that had become worse for her over the years.

In our retellings of American history and our beloved leaders, we must reckon with how a more holistic and honest rendering of our past can transform the ways we think of those who came before us. What lessons might we learn and more importantly, how do we position ourselves to honor the diversity of those who have been marginalized for far too long?

As a historian of slavery and disability, Tubman’s disability has helped to nuance my understandings of disabled people’s societal roles historically. She has pushed me to interrogate how power and vulnerability can not only co-exist but work together in liberatory ways. 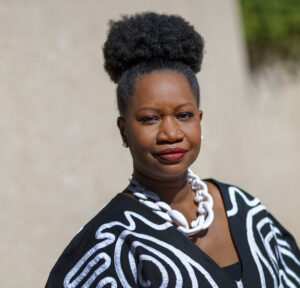 Deirdre Cooper Owens is a professor, public speaker and author. She is also a reproductive rights advocate who has worked exclusively with medical schools to change their curriculum to reflect more inclusive and accurate histories of medicine. Cooper Owens is currently writing a popular biography of Harriet Tubman that examines her through the lens of disability.