The Urgency for Reproductive Freedom: From Slavery to the New Jane Crow - Ms. Magazine
Skip to content

On May 18, the House Judiciary Committee held a hearing “Revoking Your Rights: The Ongoing Crisis in Abortion Care Access.” Among those testifying was Dr. Michele Bratcher Goodwin, chancellor’s professor of law at the University of California, Irvine, and executive producer of Ms. Studios. A portion of her testimony submitted to Congress is published below.

Soon the Supreme Court will issue a ruling in Dobbs v. Jackson Women’s Health Organization, a case that involves a Mississippi abortion ban at 15 weeks of pregnancy. If the Supreme Court allows Mississippi’s ban to go into effect, it will be endorsing Mississippi’s solicitation to overturn Roe v. Wade and Planned Parenthood v. Casey—the two cases underpinning the constitutional right to abortion in the U.S.

If the Supreme Court dismantles Roe v. Wade and its legacy of jurisprudence, it will bring significant harm to all women and all people capable of pregnancy in anti-abortion states, while imposing a death sentence for Black and Brown women.

In this term, the Supreme Court demonstrated its willingness to selectively read and ignore its own jurisprudence when it allowed a draconian Texas abortion ban, Senate Bill 8, to go into effect. S.B. 8 is a ban on abortion after six weeks of pregnancy, before which many women, girls and pregnant-capable people even realize they are pregnant. As with its shameful predecessors, the Fugitive Slave Acts, the bounty provision incentivizes private individuals to spy upon, surveil and interfere with others who are asserting fundamental human and constitutional rights such as bodily autonomy, privacy and freedom.

When states coerce and force women, girls and people with the capacity for pregnancy to remain pregnant against their will, they create human chattel and incubators of them.

Similar to Texas’s S.B. 8 law, Mississippi’s ban provides no exceptions for cases of rape or incest. Stripping away these exceptions and forcing abortion providers to close their doors exposes the illogic and cruel political nature of these bans, which showcase the dismantling of democratic norms and principles. Two dozen states will likely respond with bans, some that “trigger” if Roe is overturned, that will gut reproductive freedoms in those states entirely or by significant degree.

When states coerce and force women, girls and people with the capacity for pregnancy to remain pregnant against their will, they create human chattel and incubators of them. By doing so, state lawmakers force their bodies into the service of state interests.

There is a cruel irony to this, buttressed on one end by the abolition of human slavery in the U.S., and on the other end, the repeal of draft laws that forced young men to surrender their bodies to the state in order to protect our nation. Today, Texas, Mississippi and other states with “trigger” bans make clear that the essences of chattel bondage and the draft have returned—but only for women, girls and pregnant-capable people.

It was no secret the grave sexual harms and predations that Black girls and women experienced during chattel slavery, including forced reproduction under the most shameful and brutal circumstances. The writings of Harriet Jacobs, Frederick Douglass, W.E.B DuBois, and even receipts archived by President Thomas Jefferson, reveal the barbarism found in exploiting Black girls and women’s reproduction for the interests of others rather than their own.

Since 1865, the Congress of the United States has considered the question of Black women’s freedom from coercion and condemned bodily exploitation. Lawmakers were neither naïve to the sexual exploitation and forced pregnancies of Black women, nor intended that only Black men would become freed from the bowels of slavery. In short, the originalist meaning of the 13th Amendment applied equally to Black women as Black men.

Not satisfied by the 13th Amendment alone making the strong case for Black people’s liberty and freedom, including that of Black women and not limited to that of Black men, Congress followed in 1868 with the ratification of the 14th Amendment. Neither the 14th Amendment nor any other article or amendment in the US. Constitution makes reference to fetuses, embryos or “unborn children.”

Notably, the 14th Amendment further secures the liberty interests of Black women who had been subjected to cruelties inflicted on them physically, reproductively and psychologically.

Clearly, the 13th and 14th Amendments were not intended only for Black men—in text, practice or enforcement. Legal history demonstrates Congress did not intend that Black women would remain in the confines of human slavery. But time and again, the judiciary has overlooked this text and its application to all women and especially Black women on matters of reproductive health, rights and justice.

Impact of Abortion Bans and Restrictions

A dramatic proliferation in anti-abortion legislation in the United States has coincided with this nation becoming the deadliest in the ‘developed world’ to be pregnant and attempt to give birth.

Simply put, in these states, women and girls cannot trust lawmakers with their lives—and state and national health data explain why. During the past decade—with the chilling rise of extremism in American state legislatures and buttressed by the former president’s alarming promise to only nominate anti-abortion judges—a dramatic proliferation in anti-abortion legislation in the United States has coincided with this nation becoming the deadliest in the “developed world” to be pregnant and attempt to give birth. This crisis in America affects all women, girls and people of reproductive age and capacity. Yet, this crisis does not affect all women equally: Black women are 3.5 times more likely to die due to maternal mortality than their white counterparts.

Thus, despite claims to the contrary, banning abortion will not help Black women. In fact, the opposite will occur.  Many will die. It is no coincidence that the states with the highest maternal mortality rates also lead the nation in anti-abortion legislation.

As a first step toward preserving women’s health and protecting their constitutional interests, Congress can enact the Women’s Health Protection Act, which would codify protections for abortion access in federal law and guarantee that even in a state such as Mississippi, a woman who needed an abortion could have one.

As a second step, Congress can enact a Reproductive Justice ‘New Deal.’ This would protect women, girls and members of LGBTQ communities from potential future laws that would seek to ban abortion and punish pregnant people who seek to terminate a pregnancy. It would also proactively address poverty, which tethers the most vulnerable Americans to poor housing, education and health.

Finally, history reveals the cruelties of racism, sexism and white supremacy in forced labor and reproduction. It is an undeniable history recorded by this very Congress. And, should the Supreme Court dismantle Roe v. Wade, its decision will be the modern day corollary and appendage to Plessy v. Ferguson—anchoring separate but equal legal discourse in matters of reproductive health, rights and justice. 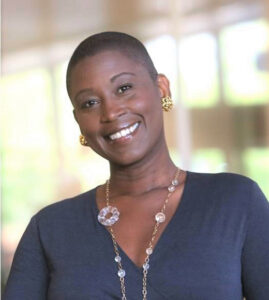 Michele Goodwin (she/her) holds the chancellor’s professorship at the University of California, Irvine. Goodwin is the host and executive producer of podcast “On the Issues with Michele Goodwin.” She is also the founder and director of the Center for Biotechnology and Global Health Policy and its Reproductive Justice Initiative.