Millions of Women Would Benefit From a Minimum Wage Hike—Far More than Men - Ms. Magazine
Skip to content

The parade of Equal Pay Days kicked off recently. The dates mark wage gaps for all women, Black women, Latina women—each one more disheartening than the last. But then what? After we stand by the side of the road and watch, we go back to our lives, unsure why this is still going on, and what to do about it.

It’s not a simple problem to tackle, that’s for sure—but it’s also not impossible. Let’s start with the reality, and then look at the history and then some actions that would offer transformative change.

First, the wage gaps by gender, race and ethnicity happen at all levels, but the weight at the bottom is pulling us all down. The fact is that the low-wage workforce is wildly disproportionately made up of workers from historically marginalized populations: women and people of color.

When Oxfam recently analyzed data on who earns low wages in the U.S., we were prepared to find that the low-wage workforce was skewed by race and gender. What we didn’t expect are the staggering gaps.

Nearly a third of the workforce (32 percent) is earning less than $15 an hour: roughly 52 million workers struggling to get by on less than $30,000 a year, even now, in the face of surging inflation and skyrocketing gas prices.

Simply put, federal law has enshrined a double standard. It has created a low-wage workforce that law ignores and employers exploit.

So, how did this happen? It can’t be an accident. And it’s not. It’s the result of a long, tangled history in our country, one built on structural racism and sexism, along with a legacy of slavery and a broken immigration system.

It has turned into a kind of occupational segregation so ingrained that it’s become dangerously invisible. Consider gender: Women are often employed in jobs involve tasks historically considered “women’s work”: serving, cooking, cleaning and caring for people. And race/ethnicity: Hispanic/Latinx workers make up a huge part of the agricultural workforce; women of color make up most of the workers in domestic labor.

And these jobs? Often fall outside the protections offered in the Fair Labor Standards Act (FLSA). Employers can still pay tipped workers (two-thirds female) $2.13 an hour (stuck since 1991). Farm workers and domestic workers do not enjoy protections like overtime and rights to organize which are provided to most workers under the FLSA.

This is not a coincidence—it’s a direct result of discrimination against these populations. When the FLSA was first passed in 1938, it specifically exempted farm workers and domestic workers because of pressure from Southern legislators who insisted on excluding Black workers.

Not that the work, and the workers, are not essential to our economy and society. These workers harvest, cook and serve our food, and care for our children and parents. Their work has value, they have dignity.

But here we are: Simply put, federal law has enshrined a double standard. It has created a low-wage workforce that law ignores and employers exploit.

And in 2022, it has become nothing less than a civil rights emergency. Why are we comfortable, as a nation, in watching certain communities slide into despair and poverty-even as they’re working hard—while corporations and shareholders enjoy record profits, and executives bring home record compensation?

It has to stop. Congress should do all in its power to mandate that employers pay wages that don’t leave workers in precarity or even poverty.

At the end of the day, in light of this heavy history, where do we go?

Well, one solution is straightforward, and simple: Raise the federal minimum wage, and establish one universal wage. That’s on the table in Congress, in the form of the Raise the Wage Act—but you won’t be able to find it. While it passed the House, once it entered the Senate it got lost under a blanket of corporate influence and political cowardice.

States have acted; many large corporations have acted, some announcing a $24 hourly starting wage for certain workers. So why is the Senate blocking a piece of legislation that would have a transformative impact on wages and well-being of people in this country?

Raising the wage to $15 and establishing a universal minimum wage would go a long way toward chipping away at the gender and race wage gaps in this country. After years of watching the parade, maybe we can finally do more than watch: Let’s shift the dates, reward the workers, and value the work properly. 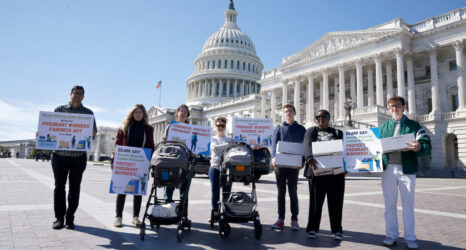