Justice and the Meaning of the Tubman $20 - Ms. Magazine
Skip to content

From persistent pay gaps and housing insecurity to shamefully high mortality rates, Black women shoulder many of the same challenges Harriet Tubman endured in her lifetime.

Editor’s note: Throughout Black History and Women’s History Months, the Harriet Tubman Bicentennial Project pays tribute to this feminist icon with a special commemorative issue through Ms. online and in print. The Tubman 200 site features an interactive calculator, where you add up Tubman’s estimated hours of work to discover just how much she is owed for her enslaved labor. Other features include a history timeline and a poetry tribute, in which you are invited to submit an original haiku celebrating Tubman’s bicentennial birthday. Explore the interactive groundbreaking site here.

If Black women were free, it would mean that everyone else would have to be free since our freedom would necessitate the destruction of all the systems of oppression.

It is no coincidence that the Combahee River Collective—the Boston-based Black feminist lesbian group who released a powerful statement in 1977 articulating their vision of liberation—chose Harriet Tubman as their inspiration. Through the power of naming, they have memorialized the moment she courageously led a Civil War-era raid along the banks of South Carolina’s Combahee River on June 2, 1863.

It is only fitting that Tubman should receive national recognition for her life of service and sacrifice. The decision to replace the image of President Andrew Jackson with Tubman’s on future U.S. currency is a powerful, symbolic gesture.

Although Tubman’s face will eventually grace the $20 bill, the irony is that her life story brings into bold relief the economic struggles Black women face in American society and the creative ways they have managed to use limited material resources to help—and indeed liberate—others. Harriet Tubman’s lived experiences reflect the broader challenges that Black women endured in American society: often celebrated, but hardly ever protected.

Financial insecurity shaped every aspect of Tubman’s life. Born into slavery in Maryland on the Eastern Shore, Tubman relied on her own ingenuity to save money. Under the exploitative conditions of slavery, Tubman negotiated with her owner, Edward Brodess, to earn her own income by hiring out her labor to other white families and businesses in the region.

Despite economic hardship, Tubman understood the necessity of freedom, which led her to hire an attorney to investigate the legality of her enslavement. The attorney discovered that Tubman’s mother and her children should have been emancipated based on a previous slaveholder’s will. Yet, Brodess had not honored those terms (Larson, 74; Clinton, 29).

Tubman ultimately took matters into her own hands. In 1849, after Brodess’s death, rumors began to spread that his widow intended to resolve mounting debt through the sale of enslaved people on the plantation. Tubman knew that she needed to make her move.

With the help of several abolitionists, Tubman fled to Philadelphia. There she put aside as much money as she could. When she became aware that her niece Kessiah was scheduled to be sold at auction, Tubman made the first of many attempts to free members of her family. She successfully completed her first rescue in December 1850—liberating Kessiah and her two children from a life of enslavement.

For the next decade, Tubman dedicated her life to liberating enslaved people. Raising the money for these missions was painstaking. The process could take months, but she remained committed to the task. As a formerly enslaved Black woman, Tubman had an intimate understanding of slavery’s horrors—and the power of liberation. Like other Black abolitionists, Tubman did not consider if Black people should be liberated, but only how and when. Tubman later acknowledged this reality when she was recorded as saying: “There are two things I’ve got a right to, and these are, Death or Liberty—one or the other I mean to have.”

“No one will take me back alive,” she continued. “I shall fight for my liberty, and when the time has come for me to go, the Lord will let them kill me.”

Tubman endangered her own life for others to be free. She traveled throughout the Eastern Shore region and even crossed geographical borders in the quest for liberation. Through her many trips during the nineteenth century, Tubman developed connections to communities of freed people in Canada, where she would help settle at least five siblings and a niece. In December 1851, Tubman brought 11 formerly enslaved people to St. Catharines, Ontario, and stayed with the group as they struggled through the winter months (Larson, 96; Clinton, 104-105).

There are two things I’ve got a right to, and these are, Death or Liberty—one or the other I mean to have. No one will take me back alive. I shall fight for my liberty, and when the time has come for me to go, the Lord will let them kill me.

By the start of the Civil War in 1861, Tubman had already established a name for herself as a fierce abolitionist devoted to the cause of Black liberation. Tubman’s work as a nurse and spy for the Union Army—and the 1863 Combahee River Raid—bolstered her national prominence. Her story traveled across the nation as evidence of the courage Black people displayed—in spite of the many odds against them. Yet few truly understood what she sacrificed to liberate herself and others.

Her experiences offer a glimpse into what Black people endured in a nation that begrudgingly accepted their military service. After the Civil War, Tubman struggled to have her valorous work recognized by the federal government. In 1865, she attempted to collect the money owed to her for her military service and encountered resistance and dismissal (Larson, 252; Clinton, 193).

Similar to other Black women of the period, Tubman faced difficulty securing a pension for herself and even struggled to receive the pension of her veteran husband, Nelson Davis, following his passing in 1888. It would take more than five years before the Bureau of Pensions provided Tubman with pension payments of $8 per month. And it would take more than thirty years after the Civil War for Tubman to finally receive a pension for her own service (Larson, 278-279). Tubman’s fierce advocacy on her behalf, combined with the nationwide efforts of Black women such as reparations activist Callie House, cast a spotlight on the economic challenges that formerly enslaved Black people faced following Emancipation.

Despite the end of legal slavery in the United States in 1865, Black people remained in a precarious position as they worked to build a new life with few material resources and in the face of much violent resistance. A white supremacist and sexist society relegated Black women to the bottom of the socioeconomic ladder. Tubman, dubbed “the Moses of her people,” was no exception. She gave so much to the nation, yet the nation offered so little in return. In the years following the Civil War, Tubman struggled to maintain her monthly payments for the property she purchased in Auburn, New York. She also assumed financial responsibility for her parents, extended family, and several members of the community.

While her associates praised her contributions and recounted her many sacrifices and bravery, Tubman struggled to make ends meet. Though she made every effort to overcome it, the economic precarity that shaped Tubman’s life under slavery remained fixed in place in the decades that followed. The headline of a New York Age article from June 8, 1911—“Harriet Tubman Ill and Penniless”—illustrated the difficult circumstances of Tubman’s final years. The article appealed to the public for financial assistance to help meet the mounting bills associated with her care. The fact that Harriet Tubman would, at the end of her life, face such dire circumstances serves as a bitter reminder that celebratory acclaim is no substitute for meeting tangible needs.

The lessons from Harriet Tubman’s life remain relevant today. In the United States, Black women are paid 63 percent of the wages white men receive. And when compared to women of other racial groups, Black women face a “wider-than-average pay gap”—one that is significantly higher than others. From persistent economic and housing insecurity to the highest infant mortality rates in the nation, Black women shoulder many of the same challenges Tubman endured in her lifetime.

While symbolically meaningful, Tubman’s face on a $20 bill brings us no closer to the vision of liberation the Combahee River Collective articulated—a vision that Tubman herself embraced. This historical development will hold much greater meaning if we commit to addressing the tangible needs of Black women—including better access to quality healthcare, a fair wage, equal opportunity, and economic security. Let us work towards making these needs a reality by the time Tubman appears on the redesigned $20.

The Tubman 200 site features an interactive calculator, where you can add up Tubman’s estimated hours of work and discover just how much she is owed for her enslaved labor. Other features include a history timeline and a poetry tribute, in which you are invited to submit an original haiku celebrating Tubman’s bicentennial birthday. Explore the interactive groundbreaking site here. 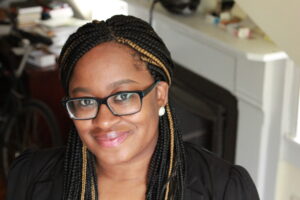 Keisha N. Blain, a 2022 New America fellow, is an award-winning historian, writer and professor. She is the author of several books, including Until I am Free: Fannie Lou Hamer’s Enduring Message to America (Beacon Press, 2021).

‘They Made History’: Ms. Magazine’s 10 Fave Features of Black Feminists